Like many, I was hooked by the HBO miniseries ‘Chernobyl’ when it was released last year. Receiving widespread critical acclaim, it sparked a surge of interest in the events surrounding the nuclear disaster of April 1986.

For those keen to delve deeper, the British Library holds a large amount of material relating to Chernobyl (Chornobyl in Ukrainian), from scientific articles and theses to photography albums and poetry collections. Earlier this year, the Library also acquired two particularly important sources: a new digital archive and a copy of a rare Cold War-era newspaper. 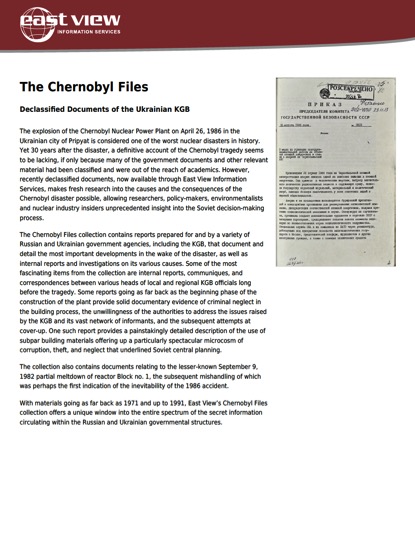 Information about the Chernobyl Files from East View

The digital archive, The Chernobyl Files, is a collection of declassified documents prepared by Russian and Ukrainian government agencies, including the KGB, that ‘detail the most important developments in the wake of the disaster, as well as internal reports and investigations on its various causes’. Among the documents are internal reports, communiqués, and correspondences between local and regional KGB officials long before the tragedy. The archive is currently only available in the Library’s reading rooms but I am happy to assist with enquiries via email if possible. 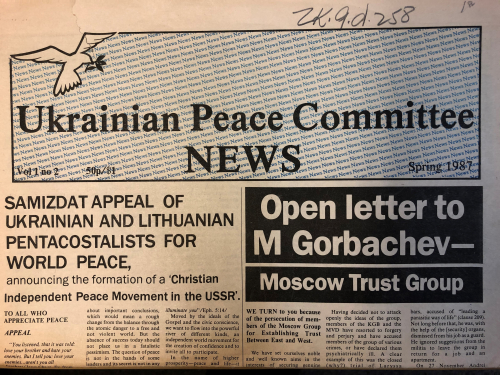 The second new acquisition is an issue of Ukrainian Peace (Committee) News. This newspaper was published in 1986/7 by the Ukrainian Peace Committee (UPC), which, according to the publication’s statement of purpose, ‘was formed in response to the disaster at the atomic plant in Chornobyl’. Its aim was to address issues relating to nuclear disarmament, human rights, the environment and national liberties, which it believed were at the centre of ‘hostilities between the governments of Eastern Europe and Western countries’. Further research, however, led me to a series of declassified CIA documents, which in turn unveiled a more complex story behind the UPC and its newspaper.

In October 1986, an individual, referred to only as ‘RK’, filed a report on the creation and activities of the UPC. The document, which was declassified and released in 2007 on the CIA’s Freedom of Information Act Electronic Reading Room website, detailed how the organisation had been set up that year by Prolog, a small group of Ukrainian émigrés working for the CIA since 1950, with the specific aim of intervening in the World Peace Congress (WPC). The WPC was in turn sponsored by the World Peace Council, a largely Soviet project established in 1949/1950 to 'promote peace programmes' around the world and counter what it viewed as the ‘warmongering’ attitude of the US. The 1986 congress took place from 15-19 October in Copenhagen, the first time it had been held in a non-communist capital since the Warsaw Pact invasion of Czechoslovakia in 1968.

The UPC, which was registered at an address in Hammersmith, London, comprised both Prolog and non-Prolog members, the latter of whom were allegedly unaware of the convert operation. In the weeks leading up to the Copenhagen WPC, members of the UPC worked to establish themselves as a credible group and gain access as delegates to the congress.

Despite several hiccups, the group’s activities in Copenhagen were deemed a success and RK recommended that the UPC should be allowed to continue and even expand its work. This included publishing ‘a 4 page tabloid size newspaper 4 times a year’ and travelling to ‘different conferences in Western Europe, Asia and Africa’ to ‘conduct interventions similar to the intervention in Copenhagen’. 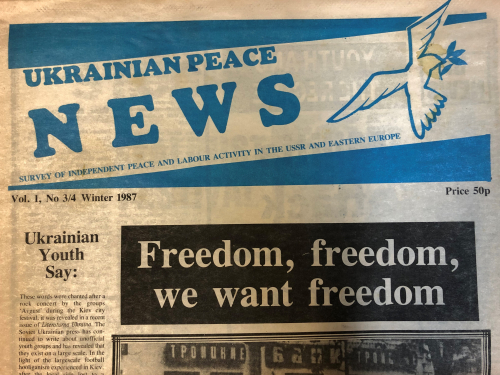 We know for certain that the UPC went on to publish four issues of the newspaper, Ukrainian Peace Committee News, three of which are held by the British Library (no. 2, published in spring 1987, and the combined no. 3/4, published in winter 1987 and kindly donated to the British Library by the Robarts Library at the University of Toronto). Although they display the same peace dove logo, the design and typeface used for issues no. 2 and 3/4 differ significantly.

All of the issues focus heavily on the Chornobyl disaster and include samizdat (literature secretly written, copied, and circulated in the post-Stalinist Soviet Union) and other articles. The Soviet war in Afghanistan and the issue of workers’ rights also feature in the paper. In addition, one article in issue no. 2 deals with the proposal to build a Pressurised Water Reactor (PWR) at the British nuclear power station Sizewell B. By including the latter article, the newspaper supported Prolog’s view that in order to ‘gain credibility within the Peace movement’ the UPC’s position ‘had to be a balanced one – not an anti-Soviet group only, but one critical of the West in some respects as well’. 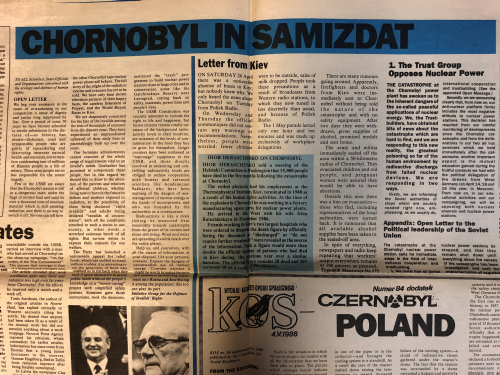 The UPC appears to have ceased its activities at the end of 1987, at the time the last issue of its newspaper was published. Although the British Library unfortunately does not hold the first issue, Ukrainian Peace (Committee) News is an invaluable source for those researching topics including Cold War relations, the Chernobyl disaster and the peace movement.

Posted by European Studies at 1:52 PM