On 13 July 2020 the city of Trieste marked the centenary of the arson attack on the Slovene National Hall by returning it to the use of the Slovenian-speaking community there. During a day of commemorations for victims of the fascist and war periods attended by the current President of Slovenia, Borut Pahor, the Italian President Sergio Mattarella handed ownership to two Slovenian-speaking associations.

In these troubled times, when stories of the rise of the far right abound in many countries, Trieste seems to be trying to take the opposite route, confronting and coming to terms with its own complicated history. The fate of and attitudes to the Slovenian community there act as a mirror to this history. 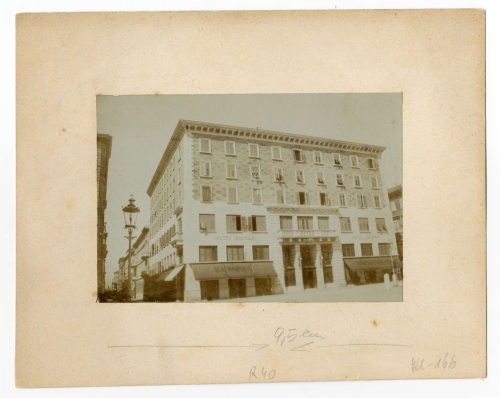 Photograph of the Slovene National Hall prior to the arson attack in 1920. Image from the National Library of Slovenia

The National Hall was a symbol of worldly success in late Habsburg Trieste. It contained a theatre, a library, and a hotel, and was built to the highest modern standards based on plans by the local architect Max Fabiani. Its existence sent the clear message that people need no longer abandon the Slovenian language to attain success: it was the language of some of the most successful citizens, as vital to Trieste as German and Italian, the languages of administration.

When a group of Blackshirts burnt the Hall down, to the apparent passivity of local police, it marked the beginning of a very dark period – and not just for the Slovenes. Trieste, a symbolically crucial site for Italian nationalism, became a laboratory and showcase for fascism, with new buildings erected on a massive scale and fascist agitators shipped in from other parts of the country to encourage the movement’s development there. Fabiani himself joined, just one year after the destruction of his own work on the National Hall. From its university to its lighthouse, the graceful Habsburg port acquired a nationalist and then totalitarian overlay.

Yet, ironically, it took the collapse of the fascist government for things to reach their nadir. In 1943, the successful Allied invasion of southern Italy led to Mussolini’s dismissal and disavowal by the King, and the occupation of the northern half of the country by its Nazi “allies.” Trieste and the province of Fruili became part of the Reich, forcibly tugged back into their pre-1918 alignment with central Europe. It was the Nazis who converted an urban rice processing plant, the Risiera di San Sabba, into a transit camp, with indications that it was also intended from the start as a death camp, the only one actually inside an Italian city, within earshot of the population. Ovens designed for drying rice provided a ready-made infrastructure for a new, grimmer, purpose.

Prisoners held at San Sabba – some to die there, some on their way to other camps across occupied Europe – ranged from local Jews to people with learning disabilities to other members of the area’s resistance to fascism, including the writers Boris Pahor and Giani Stuparich. In charge of the camp was one of Austria’s most notorious Nazis: Odilo Globočnik, the man responsible for the liquidation of the Warsaw Ghetto and the beginning of the ethnic cleansing of Poland, among numerous other appalling crimes.

Globočnik was born in Trieste himself: his name suggests that he was an ethnic Slovene, though his ancestors were from Tržič on the modern border with Austria rather than the Trieste area as such. After returning to his birthplace in 1943, Globočnik oversaw the deaths of up to 5,000 people at the Risiera before fleeing to Carinthia where he committed suicide when captured by Allied troops. Many of his associates, however, escaped without trial or retribution into post-war civilian life.

As Tito’s and other Partisans arrived in the Trieste area, a huge range of reprisals began against locals perceived as collaborators with the Fascist or Nazi regimes. On the Karst above the city, they followed Fascist examples in using natural cracks and chasms in the rock to conceal the bodies of thousands, a grim exercise echoed in many parts of Yugoslavia as the incoming regime rounded on those who had prospered during the war years. Trieste’s own fate was not settled for almost a decade: occupied by Allied troops and argued over by Italy and Yugoslavia, the city was ultimately assigned to Italy again, but lost its Slovene-speaking hinterland, which had been Italian between the wars, to the reconstituted Yugoslavia. Sections of population fled in both directions.

At Basovizza/Basovica, a karst village that is now effectively a suburb of Trieste, the mass grave at the Foiba, the chasm, and the nearby memorial to four young Slovene resistance fighters of the anti-Fascist TIGR movement stood as sad reminders of recent history, and a particular focus for aggrieved locals. 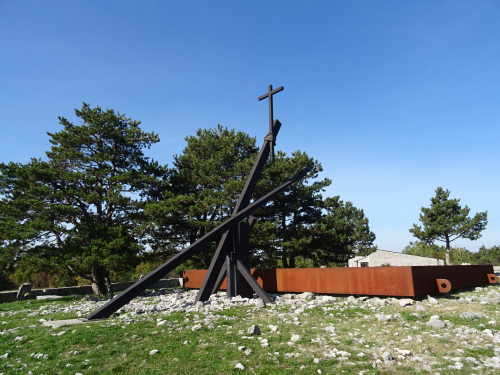 The Foiba. Photography by Janet Ashton

For domestic and other reasons, much of Italy’s war history went unexamined in the country more widely. It suited the strong Italian Communist Party not to say much about the various Foibe (some of their own members might, after all, have been perpetrators) and it suited many more to look on Fascist war crimes as somehow “less bad” than those committed by the Nazis, the perennial Teutonic invader of nationalist historiography. In the exhibition at the Risiera, for example, the perpetrators were presented as foreigners who had come in from Poland with the Nazi occupier, ignoring Globočnik’s local roots, the assistance of locals from all ethnic groups, and the racial policies of Mussolini’s government.

After the break-up of Yugoslavia things began to change, and investigations of mass graves from the 1940s took place in both Italy and Slovenia. The Foiba di Bassovizza suddenly became a new focus for Italian national identity and the memory politics of the emergent right, a symbol of “Slavic barbarity” and the dangers that lurked in Communist states. The annual commemoration ceremonies can acquire unpleasant overtones, with nationalists and even neo-fascists taking over what could be a simple remembrance for the dead and underlining it with territorial claims to the Istrian and Dalmatian coasts.

The official text on the walls at the memorial is more conciliatory, setting the massacres into the context of the repressive fascist years and pointing out that the killings were driven as much by politics as ethnicity, some of the victims being Slovenes or Croatians themselves. 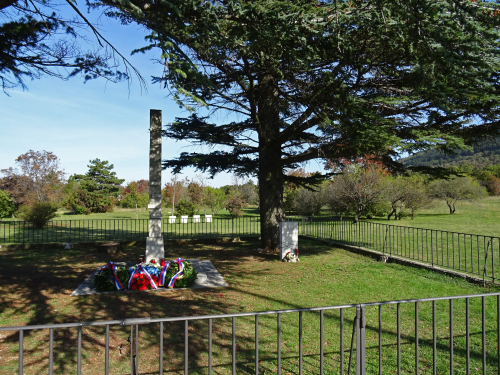 During the ceremonies to mark the handover of the National Hall, Borut Pahor and Sergio Matterella held hands before both the Foiba and the TIGR memorial, acknowledging and trying to put behind them the political and ethnic complexities of local history. There were decorations from both states for Boris Pahor, the Triestine Slovene who has never seemed fully at home in either country, and who is now, at the age of 106, finally emerging from a relative obscurity that stands in such contrast to the renown of that other Italian holocaust writer, Primo Levi.

Further reading on the Foibe and San Sabba and their place in Italian memorialisation of World War Two and the Holocaust:

Posted by European Studies at 1:54 PM