This post is a part of a series of blogs written on the occasion of the 40th anniversary of the Solidarity movement. You can read the first here. 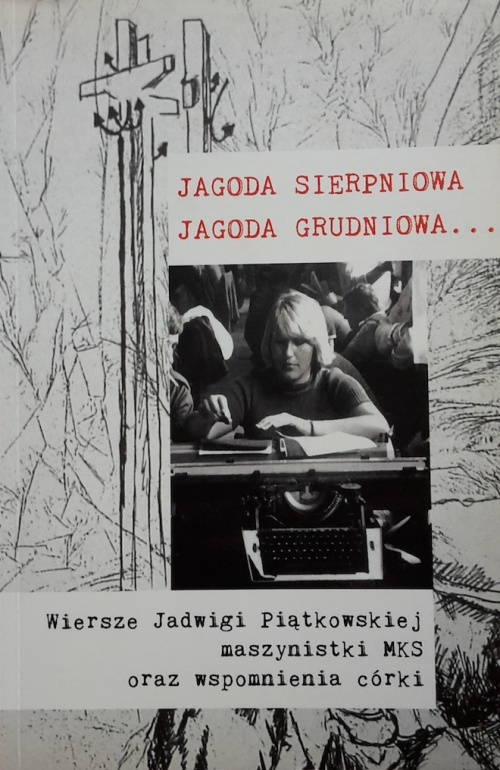 A cover of a book on Jadwiga Piątkowska published by her daughter. Ewa Korczyńska, Jagoda sierpniowa, Jagoda grudniowa (Kraków: 2014), YF.2017.a.5431

Jadwiga Piątkowska (1949-1990), also known as Jagoda, was a member of the opposition movement and a poet writing about Solidarity and events related to the political struggle in Poland in the 1980s. A single mother, Jagoda was on holiday in Czechoslovakia when she heard about the onset of the strike at the Lenin Shipyard in Gdańsk on 14 August 1980. She immediately returned to Poland and convinced Lech Wałęsa, the future leader of Solidarity, Nobel Peace Prize laureate and the first democratically elected president of Poland, that she might be of help to the protesters. She began working as a typist and, after Solidarity was established on 31 August, as an editor and journalist for its periodical Rozwaga i Solidarność (‘Prudence and Solidarity’; Gdańsk, 1982-1989; Sol.90), in which she published many of her poems. The shipyard workers' journal was established in April 1981. During the duration of the martial law in Poland (13 December 1981 - 22 July 1983), it became an underground publication of the movement, which circulated documents related to Solidarity and described repressions suffered by the political opposition. 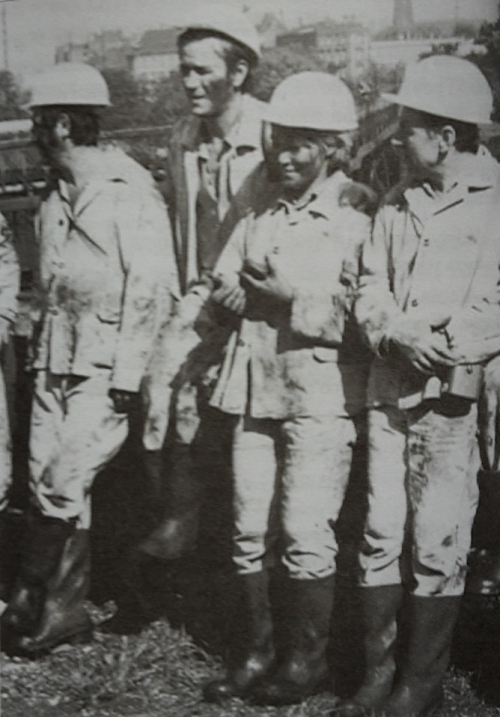 Jadwiga Piątkowska during her visit to a coal mine in Silesia as a reporter for Rozwaga i Solidarność. Photograph taken from Ewa Korczyńska, Jagoda sierpniowa, Jagoda grudniowa (Kraków, 2014), YF.2017.a.5431

Piątkowska’s work describes the struggle of the opposition against the Polish communist government. In one of her best-known poems, ‘Ewie-mojej 12 letniej córce’ (‘For Eve, My Daughter of 12’), Piątkowska tries to comfort her child, who hasn’t seen her in a long time, but who gave her the energy to persist in the strike along with other protesters. The poem was written on August 29, 1980, at 23.45 — two days before the Solidarity movement was officially established. 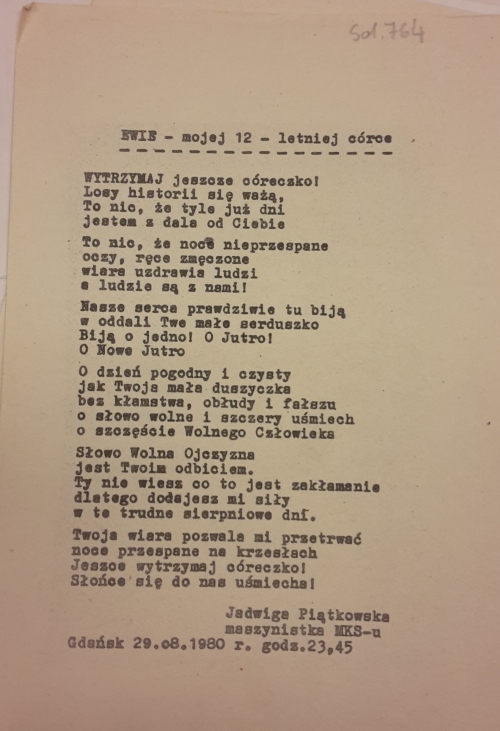 A copy of the poem ‘For Eve, My Daughter of 12’, from a Collection of Polish underground ephemeral publications. Sol.764

Hold out a while longer, my little daughter.
Our destiny is at stake.
Never mind that so many days
I’ve been away from you.
Never mind the sleepless nights,
the tired eyes and hands.
Faith heals people,
and people are with us (…).

(Translation from the album Solidarity! — Postulat 22: Songs from the New Polish Labour Movement (Nowe Polskie Piesni Robotnicze) (Folkways Records, 1981). You can listen to this poem set to music from the album here). 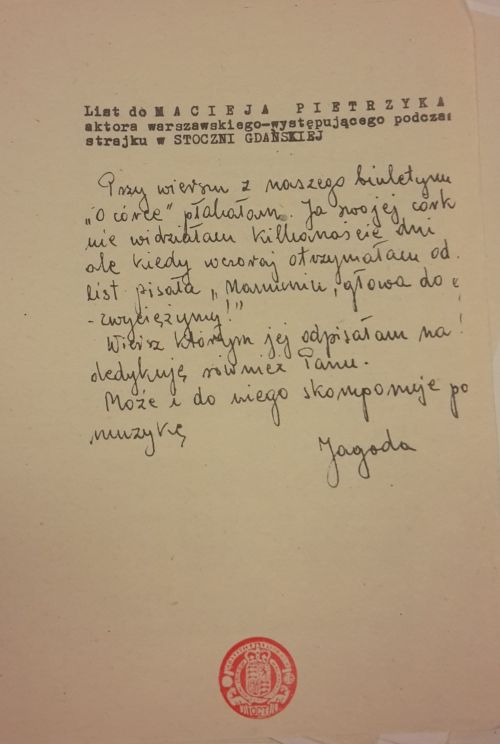 Jagoda’s letter to Maciej Pietrzyk, an actor, singer and voice of the Solidarity movement. Sol.764

After martial law had been declared in Poland, Piątkowska stayed with other members of Solidarity until the Lenin Shipyard was pacified by the militia. She witnessed a female colleague being crushed to death by a tank and got arrested. Once released from prison, she returned to her work in the opposition, this time underground. After a few months, she was re-arrested, subjected to torture and threatened with deprivation of parental rights. Her poem ‘Behind the walls’ reflects the despair many political prisoners felt at that time:

(…) And again nothing.
Void. Anticipation.
A creak of a key
In the thick door.
My heart is surrounded
By weeds.
I know you will not come,
Christ.

As a result of her imprisonment, Piątkowska suffered damage to her health, which resulted in her premature death at the age of 41.