This post is a part of a series of blogs written on the occasion of the 40th anniversary of the Solidarity movement. You can read about the 21 Gdánsk demands here and the poet Jadwiga Piątkowska here.

Seeing the British Library’s collection of independent Polish publications from the 1970s-1980s, one cannot fail to be impressed by the range and complexity of the material. Thousands of items – books, periodicals, posters, photographs, leaflets, stamps, etc. – form a very rich, dynamic collection. There is a sense of urgency about it. Almost all of this material was produced illegally and quickly, using various, sometimes unusual, duplicating methods, in response to the changing situation in the country. The aim was to inform and to educate.

Engaging in any anti-government activity involved taking huge risks: the threat of physical violence, loss of job, being expelled from university, imprisonment. It meant crossing a significant psychological threshold. But what do you do once you have made your decision? How do you conspire effectively, and, crucially, safely? With her history of partitions, uprisings and anti-Nazi movements during World War II, Poland had a long tradition of conspiring. Books like Bibuła by Józef Piłsudski offered some advice, but they reflected very different times. There was clearly a need for an updated manual, and it appeared in the form of Mały konspirator, issued by the Agencja Informacyjna Solidarności Walczącej (Information Agency of Fighting Solidarity). This unassuming little book with densely-printed pages went through 10 editions in 1983-1984. For me it is an embodiment of the spirit of the collection. 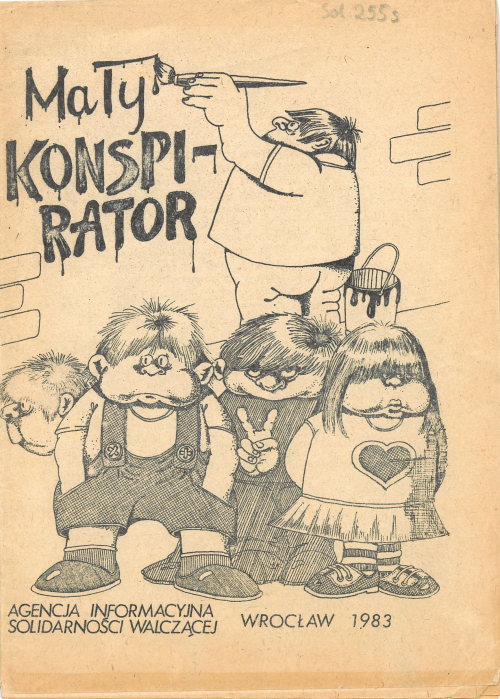 A short introductory note explains that “Mały konspirator is a collection of texts written by people who were temporarily free. If you read the first chapter you may not have to follow the advice given in the next two chapters. Once you’ve acquainted yourself with the second chapter you will know the legal reason why you cannot be prosecuted for reading the third chapter. While reading the third chapter you will realise why it would be better not to mention that you have had this book in your hands”.

Mały konspirator is full of practical advice on plotting. It tells you how to run a cell within an illegal network (links with the centre as loose as possible to avoid detection, meetings in person infrequent for the same reason but frequent enough to sustain a sense of purpose and solidarity between its members. Distributors should be paid well, otherwise they will not do their job properly – don’t trust anyone who offers to do it for free, for ideological reasons – their enthusiasm will wane and you will be left with piles of undistributed material. One should only keep minimal notes, if any at all, e.g. no full addresses, just numbers of houses/ flats; everything should be encrypted, if possible. It tells you how to behave when you suspect that you are being followed, and how to dispose of incriminating material if you think you are just about to be arrested. Crucially, Mały konspirator tells you what your rights are. Let’s say you have received an official-looking letter asking you to come to the militia station / court. Do you turn up? Ignore it if there is no case number on it, the book advises. There is nothing to be gained from appearing so eager to face the authorities. 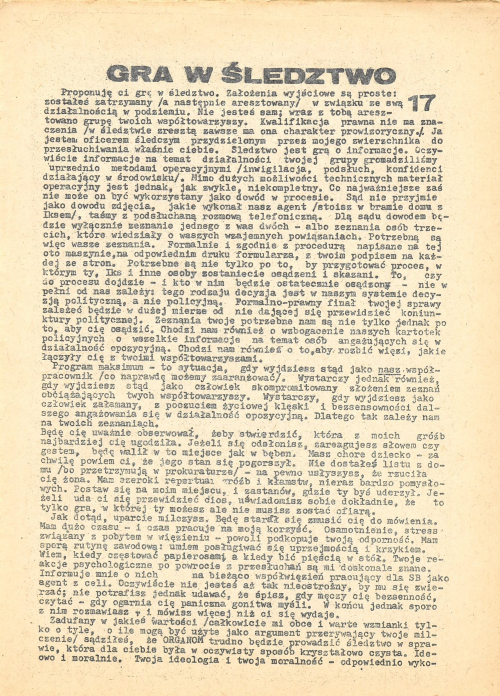 Page from Mały konspirator. The heading translates as "Interrogation game"

Mały konspirator invites you to play a game: imagine a situation when you are arrested and interrogated. The prize is information. What kind of questions will you be asked? What sort of pressure will you be put under? What are your reactions likely to be? Do you know what your weak points are? You’d better find out fast because they will be exposed and mercilessly exploited.

Mały konspirator is a document of its times. Is there anything one can learn from it in the age of WhatsApp, Telegram and Nexta? I think that the main message remains very clear: don’t take democracy for granted. And always know your rights.