German Reunification - Before and Beyond 1990

On 3 October 1990, after over 40 years of division, East and West Germany became a single state. The breaching of the Berlin Wall on 9 November 1989 and the opening of borders between the two states that followed had brought the question of a possible unification to the fore, but many assumed it would be a slow process over several years. However, the replacement of East Germany’s ruling Socialist party by a pro-unification coalition after the country’s first free elections, and the near-collapse of the East German economy, hastened the process, and the two states became one within less than a year.

The British Library’s holdings of material on the question of German reunification go back far further than the early 1990s. On its foundation in 1949 the West German Federal Republic established the Ministerium für gesamtdeutsche Beziehungen (Ministry for all-German Relations; the word ‘gesamtdeutsche’ was later replaced by ‘innendeutsche’ (Intra-German’) to avoid accusations that the Ministry advocated a return to pre-1937 borders). Part of the Ministry’s remit was to manage formal relations with the East German Democratic Republic, since the Federal Republic refused to recognise it as a legitimate state and therefore could not handle relations through the Foreign Office. But the Ministry also published material on the East German state and on the prospects and practicalities of a potential reunification, such as a collection of documents reflecting the Federal republic’s efforts to restore German Unity. 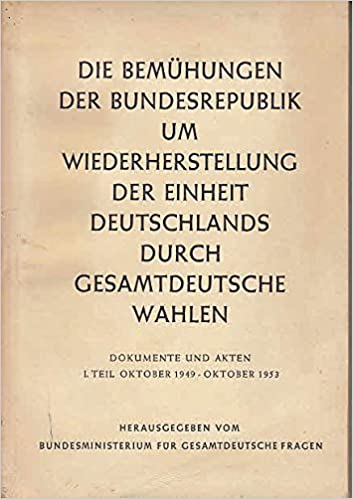 As well as official government publications on the issue, individuals also published thoughts and reflections. We have several works by the politician and writer Wilhelm Wolfgang Schütz, starting with Die Stunde Deutschlands: Möglichkeiten einer Politik der Wiedervereinigung (‘Germany’s Hour: Possibilities for a Policy of Reunification’; Stuttgart, 1955; 8030.aa.28.). One of his later works, Reform der Deutschlandpolitik (Cologne, 1965; X.709/3138.) was translated into English as Rethinking German Policy: New Approaches to Reunification (New York, 1967; X.709/6290). A pamphlet edited by Klaus Otto Skibowski, a close adviser to the first Federal Chancellor Konrad Adenauer, sets out what he sees as the moral case for reunification, but also considers practical issues around the process, not least the financial implications. Interestingly, the map on the cover shows a jigsaw-image of Germany including areas within its pre-1937 borders. The question of what territory would be included in a united Germany was not fully settled until 1970 when West Germany formally recognised the Oder-Neisse Line as the border with Poland, and reiterated in the 1990 reunification treaty. 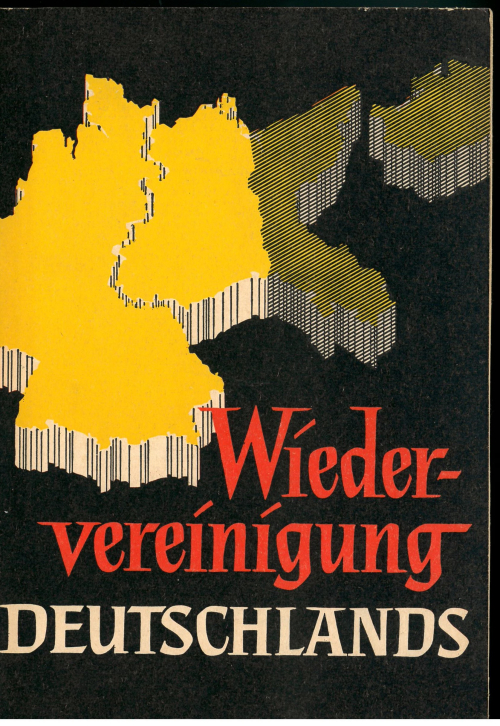 Although most of the literature from the 1950s and 60s in our collections takes the West German line that East Germany is Soviet-occupied territory, there are some exceptions, such as a, Programm der nationalen Wiedervereinigung Deutschlands (Programme for German National Reunification; Stuttgart, 1952; 08074.f.12. The text is available online here), issued by the West German Communist Party, which depicts West Germany as a slave state of American, British and French imperialists, and an expansion of the East German system to the west as the most desirable form of reunification.

In the 1960s, the Federal Republic began to establish more formal and co-operative relations with the states of Eastern Europe, and in 1972 finally formalised relations with the German Democratic Republic. While the question of reunification did not go away, our collections contain fewer publications on the issue from the 1970s and 80s. But following the actual reunification, the number of publications naturally increases, from the formal reunification treaty signed on 31 August 1990 (S.F.583/476) to academic studies and political reflections. 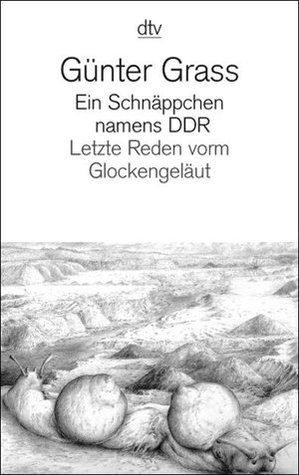 Not all of these are positive. The Nobel Prize-winning author Günter Grass was one of the most prominent voices expressing concern and dismay at the way the West German Federal Republic effectively absorbed the former German Democratic Republic. Similar concerns are expressed in satirical form in a collection of sketches and cartoons, Das letzte Ende, from the East German Cabaret Distel (‘Thistle’), and find a poignant echo in the popular film Good Bye Lenin where the main character, having tried to keep the truth about the events of 1989-90 from his ailing mother, a former East German party activist, fakes a broadcast announcing the end of the German Democratic Republic in a way that he himself finds more acceptable and relatable than the reality. 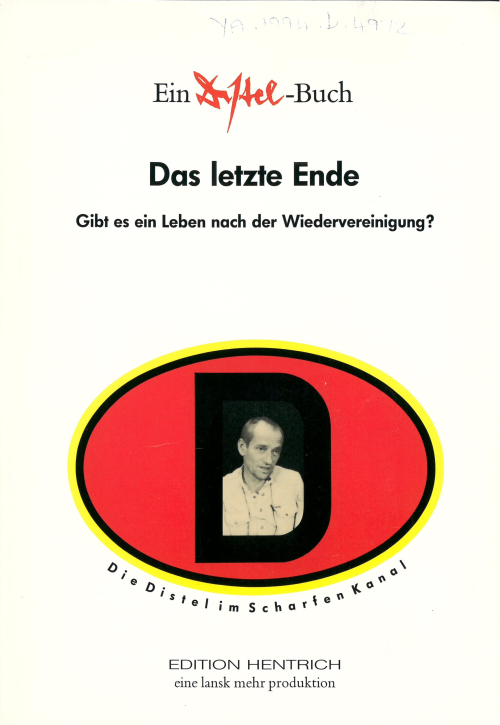 It is certainly true that after initial euphoria, Germans on both sides of the former divide found it difficult to adapt. Many East Germans lost their jobs as the infrastructure of their former state crumbled and was rebuilt according to capitalist principles, while some westerners resented the large amounts of money pumped into the east to tackle these problems. The concept of the ‘Mauer im Kopf’ (‘wall in the head’) was coined to describe lingering mistrust and misunderstanding among the citizens of the different former republics. Reunification also saw a rise in right-wing nationalist groups which identified and attacked immigrant workers as a scapegoat for their own dissatifactions (the website zweiteroktober90 examines the roots and early manifestations of this violence).

The many books – from Germany, Britain and beyond – in our collection published since 1990 examine these problems and contradictions, and examine the history of reunification and the new Germany since 1990. A search in our online catalogue using the keyword ‘Wiedervereinigung’ or, for more recent material, the  subject heading ‘Unification of Germany (1990)’ is a good way in to exploring the collections.

Despite the challenges and problems around reunification, for most who remember the days of a divided nation it is hard to see it as anything other than a positive step, and a recent survey by the Pew Research Center found that ‘around nine-in-ten Germans living in both the West and East say that German unification was a good thing for Germany’ and that ‘life satisfaction in East Germany has skyrocketed since 1991’. Although today’s 30th anniversary celebrations will be muted due to the Covid pandemic, there is still every reason to celebrate.

Posted by European Studies at 12:58 PM