The Spanish Friar who “told Europe” about China

When we think of early modern Spain as a mediator between East and West it’s normally with reference to Muslim-Christian relations.

But Juan González de Mendoza (1545-1618) was responsible for supplying Europe with information about the Far East. Like many an early modern travel writer, he was a member of a religious order (in his case the Augustinians) engaged in missionary work. And like some travel writers (Marco Polo, anyone?) he never went to the country involved.

He was selected by Philip II for an ambassadorial mission to China. He set off from Spain in 1580, and got as far as Mexico with the intention of proceeding via the Philippines to China. The journey was aborted by unrest in the Philippines and González de Mendoza returned to Spain in 1583 and thence to Rome, where Pope Gregory XIII commissioned his account of China, published in Rome in Spanish in 1585.

He therefore based his book on other travellers’s accounts, including that of the Francisan friar Martín Ignacio. 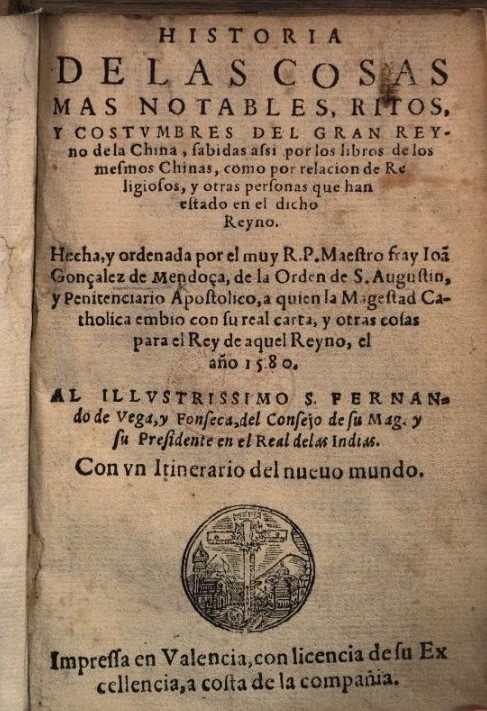 The speed of translation demonstrates the hunger in Europe for news of China.

Curiously, Hakluyt didn’t include it his Voyages as he avoided reprinting already known works and Robert Parkes’s English version had been issued in 1588 (Quinn, I, 215).

One of the outstanding ‘best-sellers’ of the sixteenth century … It is probably no exaggeration to say that Mendoza’s book had been read by the majority of well-educated Europeans at the beginning of the seventeenth century. Its influence was naturally enormous, and it is not surprising to find that men like Francis Bacon and Sir Walter Raleigh derived their notions of China and the Chinese primarily, if not exclusively, from this work’ (Boxer, p. xvii).

So here is a field of knowledge to which Spain’s contribution was hugely influential in its time, shaping western views of China for decades to come.

Posted by European Studies at 10:15 AM