Celebrating the centenary of Sovremennye zapiski

This year marks the centenary of Sovremennye zapiski (‘Contemporary Notes’), the most successful Russian-language thick journal published by émigrés during the interwar period.

Appearing in Paris in November 1920, the first issue of Sovremennye zapiski was published by a group of five Russian émigrés in Paris. This ‘thick’ journal was an important literary and socio-political publication for the roughly 50,000 Russian immigrants in Paris during the interwar period. It would continue to appear irregularly until April 1940. 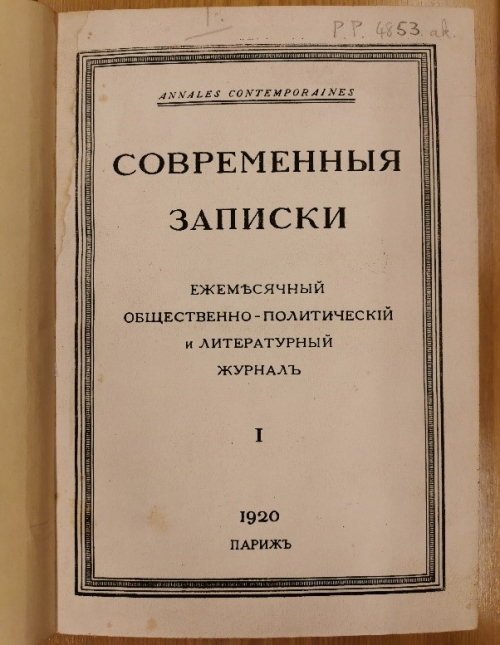 The post-October 1917 Russian emigration was composed of a diverse, fractured and confused population, drawn from every level of pre-revolutionary Russian society. There was a sense of outrage and helplessness among the émigré population as they attempted to establish new lives in indifferent foreign countries, receiving delayed and unverifiable news of events in Russia filtered through a chaotic telegraph system and the foreign press. From its first issue, Sovremennye zapiski both addressed the condition of exile for many Russian writers and offered analyses of events within the RSFSR.

Sovremennye zapiski provided Russian émigré writers with an important publishing forum, offering a livelihood as well as the prestige of contributing to a continuation of the illustrious Russian thick journal tradition. A ‘thick’ journal could publish work that writers would find difficult to place elsewhere, as émigré newspapers offered too little space and book contracts were hard to come by. While Sovremennye zapiski is known for publishing the early prose of Vladimir Nabokov, the journal would also publish the prose of other well-known Russian writers such as Nobel prize-winner, Ivan Bunin, the popular prose of Teffi (pseudonym of Nadezhda Alexandrovna Lokhvitskaya), and the complex work of celebrated Silver Age poet, Marina Tsvetaeva. Sovremennye zapiski also offered their émigré audience the work of the new Russian writers who were developing their own voices beyond their homeland, such as Gaito Gazdanov. Divided into the traditional categories of Russian thick journals, Sovremennye zapiski offered an illustrious belles-lettres section, informed and thoughtful political and social commentary, literary criticism and poetry, as well as reviews of cultural trends and recent Russian-language works.

The shadow of revolution and the flight of émigrés from civil war looms large over this first issue of Sovremennye zapiski, five years on from the Bolshevik coup of October 1917. This first issue of the journal included the first instalment of Count Aleksei Tolstoy’s trilogy, The Road to Calvary, in which he traces the fate of the Russian intelligentsia on the eve of the Russian Revolution of 1917. Another notable contribution is In the Homeland by one of the journal’s editors, Mark Vishniak, a feature that would become a regular column commenting on Russian affairs and offering émigrés information and insight into their homeland.

Sovremennye zapiski is dedicated, above all, to the interests of Russian culture. Our journal is fated to appear in particularly difficult conditions for Russian society; there is no place for free and independent speech in Russia itself, but here, abroad, such great cultural strength is concentrated, violently torn from its nation, and from true service to it. (‘Ot Redaktsii’, Sovremennye zapiski, 1920, Vol. 1, p3)

The networks of periodicals published by émigré communities around the world attest to the continued vitality of a society of émigrés abroad, despite their difficult circumstances, committed to serving the nation even beyond its national borders. These journals and newspapers also provide evidence of the formation and development of an émigré community in a foreign cultural sphere through political and literary activities. 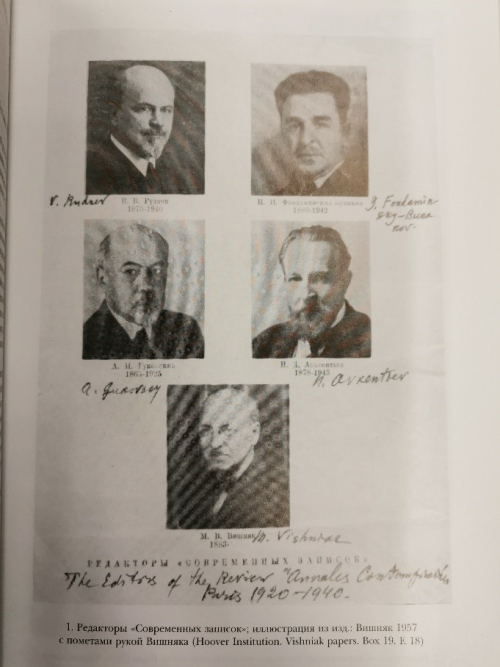 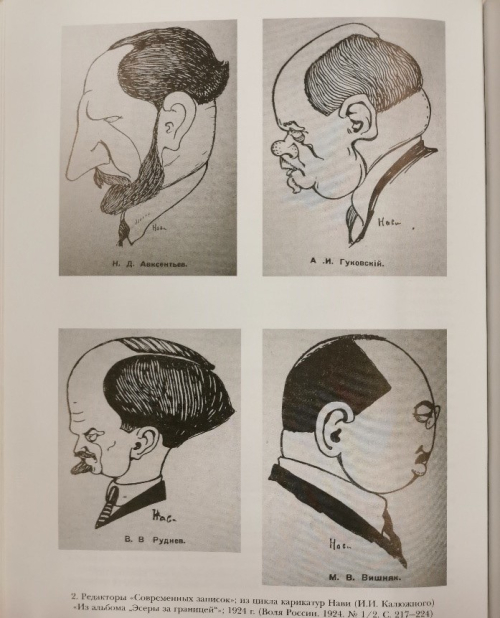 The significance of Sovremennye zapiski is evident in the memoirs of its contributors. In The Italics are Mine, the writer Nina Berberova, a keen observer of émigré life, notes that Sovremennye zapiski was ‘a literary monument’ in which ‘in the course of almost a quarter of a century significant things, the old and the new, could appear’. The popularity of the journal gave rise to a mythology surrounding its editors, each of whom had held important political posts in the Constituent Assembly following the Revolution of March 1917. The legends surrounding the editors of Sovremennye zapiski contributed to the authority of the journal, making it the most prestigious interwar émigré journal in which to be included. All 70 issues of this important periodical are held by the British Library, including the collected correspondence between its editors and contributors.