In the light of the current exhibition Unfinished Business: The Fight for Women’s Rights, I want to show a new acquisition, an Italian poem printed in Venice in 1618.

References to the author’s intentions are already clear in the choice of the dedicatee, a female patron, Caterina Gonzaga, whom she actively encourage to read the poem. 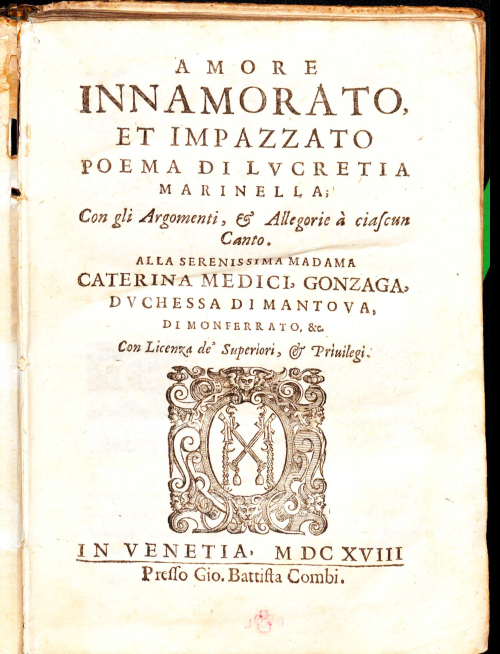 The poem tells the story of Cupid’s conversion to Christianity. The literary form is inspired by Ariosto, Boiardo, Tasso and the epic poems of the Counter-Reformation. The author’s aim is indeed to promote the values of the Church, through the allegory of Cupid’s religious journey and conversion. The poem at a first glance follows the religious constraints of its time, but its main female character, Ersilia, is an independent woman fully in charge of her destiny. She will reject Cupid’s love and the passive role of the ethereal donna angelicata provided by the Italian literary canon of Dante and Petrarch.

Ersilia is stronger than Cupid, and her resistance to his advances asserts her religious values, but is also imbued with feminism. Religion had to be used to validate work and ideas and to get published.

The author, The author, Lucrezia Marinella (1571-1653), was the daughter of the writer and physician Giovanni Marinelli, and is usually known by the feminine form of her father's surname. Her father encouraged her to study poetry, music and philosophy. She became the most versatile, prolific, and learned woman writer of her generation. She was close to the Accademia Veneziana, but led a reclusive life of private study. She married a physician and had two children. 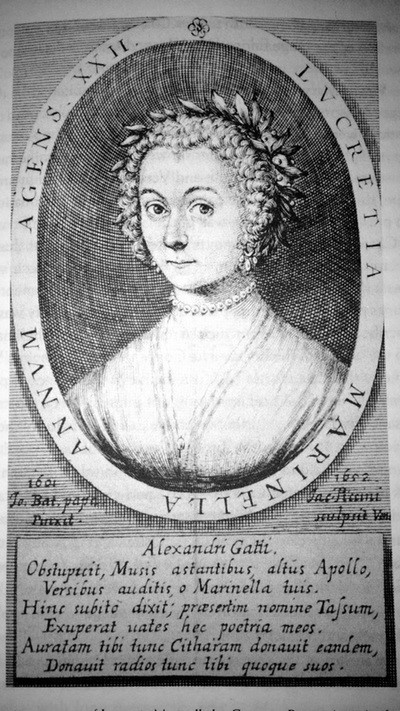 Lucrezia Marinella’s fame as one of the very first feminist writers ever is mostly due to the treatise Le Nobilità et Eccellenze delle Donne, et i Diffetti, e Mancamenti de gli huomini.. (Venice, 1600; 1080.k.7.(2.)) ‘The nobility and excellence of women’, recognised as a landmark in the history of women’s contribution to the querelle des femmes. 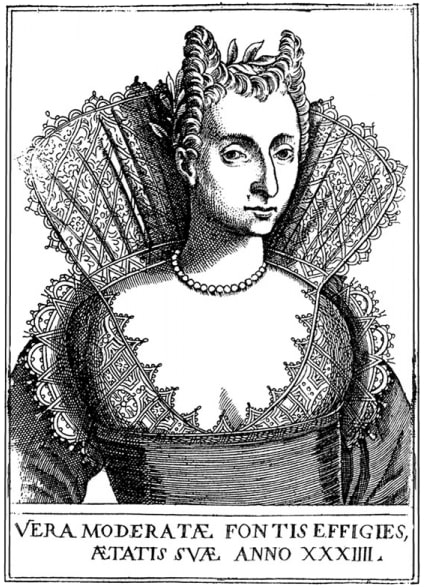 Marinella’s work will sit alongside that of another Venetian author of the same period: Modesta Pozzo or Moderata Fonte (1555-1592). Although little known to modern criticism before around 1980, Fonte is recognised as one of the most accessible and appealing of 16th-century Italian women writers. Her best-known work is the posthumously-published dialogue Il merito delle donne ‘The Worth of Women’ (Venice, 1600; 721.f.17.), which is one of the most original contributions to early modern debate on sex roles, as well as one of the earliest to have been authored by a woman. Other women writers who preceded and inspired Marinella are Gaspara Stampa and Vittoria Colonna.

Amore innamorato, et impazzato has been purchased with the generous help of the British Library Collection Trust.