Frederick William Cosens (1819-89) began his working life aged 17 when he joined the sherry firm of Pinto Pérez in London as an invoice clerk. It was the start of a highly successful business career. In 1848, he set up his own sherry export-import company, based in London and with bodegas in Jerez and Puerto de Santa María. Then, in 1862, he entered the port wine business in partnership with the London-based firm Da Silva. In 1877, Silva & Cosens merged with the prestigious Dow & Co. Cosens’ income allowed him to build up substantial collections of fine art, printed books and manuscripts. At his death, these were auctioned at five sales at Christie’s and Sotheby’s.

Sotheby’s catalogue of Cosens’ printed books highlighted ‘Spanish and Portuguese literature, and numerous publications relating to Cervantes, Calderón, Lope de Vega… standard works by English and foreign writers…’. He also owned books on Spanish painting, Peninsular history, travel accounts and an extensive collection of Spanish chapbooks. Arguably, drama held the greatest attraction for him, notably Shakespeare and the Spanish theatre of the Golden Age. Dickens, Cervantes and Galdós were among his favourite novelists. He also contributed articles and reviews to the Athenaeum and Notes and Queries on a range of Spanish topics, plus not a few on Shakespeare. 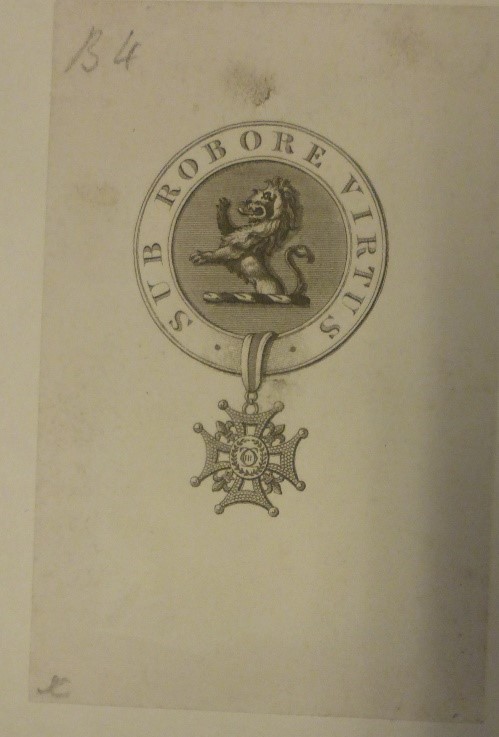 Frederick Cosens’ bookplate. The plate appears in many of Cosens' books acquired by the BL.

Cosens was also active as a translator. He produced English versions of two 17th-century Spanish plays on the legend of Romeo and Juliet: Lope de Vega’s Castelvines y Monteses and Francisco de Rojas Zorrilla’s Los bandos de Verona. These were privately published in 1869 and 1874 respectively. His treatment of the two plays was very different. Cosens translated the whole of Lope’s play into English verse, while of Los bandos he put into verse only ‘such portions … as bear some reference to Shakespeare’s tragedy’. He regarded Lope’s play as superior to Rojas Zorrilla’s and provided only necessary linking passages in prose in the latter.

English translations of the two Spanish plays were among Cosens’ manuscripts auctioned at Sotheby’s in July 1890. The manuscript of Castelvines is held by the library of the University of Pennsylvania, while that of Los bandos is in the Folger Shakespeare Library in Washington DC. The latter is written in an even copperplate hand and is evidently the fair copy of a close literal translation in prose. The published version, however, is very different, both in the summary passages in prose, and also in the selected passages of verse. The style of the latter is highly poetic. Cosens’ library also contained copies of translations into English prose of other Spanish literary works. These included poems by Lope de Vega, Spanish ballads, Gonzalo de Berceo’s life of Santo Domingo de Silos and the medieval Spanish epic, the Poema de Mio Cid. The evidence of the literal prose translation of Los bandos suggests that it was the first step in a process that ended with the published text. Except for a version of a tale from Juan Manuel’s Conde Lucanor, Cosens published no other translations, although he evidently did intend to publish a version of the Poema de Mio Cid, but stopped when John Ormsby’s was published in 1879. His interest in the medieval narrative works has rarely been commented upon and the location of the translation of Berceo’s Vida de Santo Domingo is – as far as I know – unknown. There also remains the question whether Cosens himself was responsible for the prose translations or whether he employed someone to produce them as the basis of potential literary versions.

Cosens’ interest in Spanish literature and art began most probably in Spain in the course of his business career. His collection of Spanish books had begun by 1854 when he sent a list of some 500 books to the Orientalist and scholar, Pascual de Gayangos, who later would catalogue the Spanish-language manuscripts of the British Museum Library. Gayangos commented that Cosens subsequently acquired many more excellent books. Some of these could be those that he purchased at important auction sales, e.g. those of Lord Stuart de Rothesay (1855) and Richard Ford (1861). Gayangos’s role in Cosens’ development should not be underestimated. He continued to advise and assist him in the acquisition of Spanish books, as he did with notable Hispanic scholars including Stirling-Maxwell, Ticknor and William H. Prescott. It was Gayangos who, together with his son-in-law, J.F. Riaño, selected and had transcribed for Cosens documents from the archive of the Conde de Gondomar, Spanish Ambassador to London (1613-18, 1619-22), held at the Archivo General de Simancas.

When Cosens’ library was sold at Sotheby’s in 1890, Gayangos purchased a number of the Spanish manuscripts and considerably more of the printed books. These were acquired for the Spanish national library following Gayangos’ own death in 1897. The British Museum purchased 37 printed books in Spanish, the majority published in the 19th century. Henry Spencer Ashbee purchased 15 items related to Cervantes, all of which came to the British Museum Library with his bequest of 1900. Just one Spanish manuscript – an account of the reign of Felipe V - was purchased, although the transcriptions of Gondomar’s papers were acquired for the Public Record Office.

Posted by European Studies at 12:49 PM