‘If we should not judge books by their cover, can we judge people by their clothes?’ In anticipation of the fashion competition due to be launched by the British Library and British Fashion Council in the New Year, here are some thoughts on the importance of fashion. For those looking for the inspiration, it can be found anywhere: mythology, paintings, even literature.

In mythology, Strife threw an apple marked ‘To the fairest’ among three goddesses: Juno (queen of the divinities), Pallas Minerva (goddess of war and learning) and Venus (goddess of love). To settle the matter they went to the shepherd Paris, who reasonably said he couldn’t judge their beauty with their clothes on.

For the artists of the Renaissance such as Rubens, this was an excellent excuse for studies in the nude. 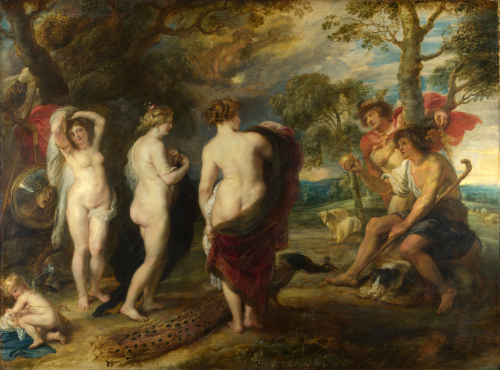 The Judgement of Paris by Peter Paul Rubens

But not everyone thought like Rubens. One contemporary critic said that Rubens had made the goddesses ‘too naked’.

Among the poets, Ovid has no description of the goddesses. Fifteen hundred or so years later the Valencian poet Joan Roís de Corella wrote his version of the Judgment of Paris. Corella (or doubtless his sources) tells it as follows.

Paris says, ‘It will not be possible for me to judge this case unless I can contemplate your persons without any veil …’

First up is Pallas Minerva, who says,

‘As the ambition of vanity of human praise has captured us and made us subject to the judgment of this young man, we are obliged to obey the laws which he as judge determines.’

And, while talking, she began to untie the belt of a skirt of dark red damask, whose decoration was picked out with great skill in emeralds, which, mixed with sapphires, dazzling human sight, transported her from this world. And the skirt was sprinkled with foliage of green and fertile olive; the olives, covered with black and green enamels, which invited the viewers to stretch out their hands to take the fruit of the painted tree. And on her shoes, of purple satin, were embroidered sharp-flowered thistles, which made show of true spikes, so that you would not dare to pick the raised olives from the broad skirt. And a motto in golden letters among the thorns clearly read, ‘Open your eyes to the harm which can ensue.’ And the excellent queen bore on her bosom a gleaming carbuncle which hung from her neck on a cord of golden thread, so fine that human sight could grasp only its colour and not its quantity.

The other goddesses follow suit. Juno feels that as queen of Olympus she shouldn’t have to demean herself before younger women: but she still wants to be the fairest. Venus locks eyes with Paris as she drops her cloak. You’ll remember that Venus cheated by promising Paris Helen of Troy. And that led to the Trojan War. 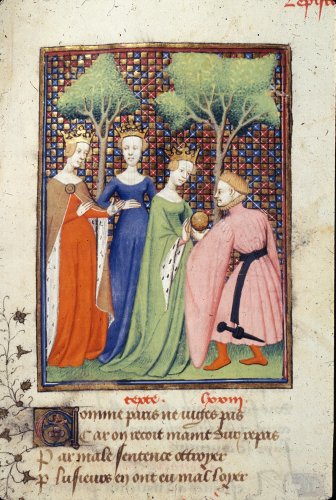 Detail of a miniature of the Judgement of Paris, between Athena, Juno and Venus, in Christine de Pizan ‘L’Épître Othéa’. Harley 4431, f. 128v

So it’s clear that although Paris thought the goddesses’ beauty was in their bodies, for Corella their clothes were much more worthy of attention. I think this isn’t unusual in medieval texts, probably because the medievals thought clothes could bear social or symbolic meaning which bodies couldn’t. Corella says nothing about the body, he says little about the cut of the clothes (which by the way are medieval rather than classical), he says little about the cloth that makes the clothes, but says a lot about the metals and jewels which adorn them, and even endows each garment with a verbal message picked out in gold.

So that’s the importance of fashion.

Fashion competition details will be available in January, via this link, which also has information about previous years’ competitions and related activities.