Doughnuts and Fools: Some Carnival Traditions

It’s Shrove Tuesday, and that means pancakes in Britain, but not everywhere! Today we take a look at some Polish and German carnival traditions.

The last days of the Carnival season start in Poland on Fat Thursday (tłusty czwartek). It is widely celebrated by eating traditional doughnuts called pączki. Filled with rose jam or plum preserve, amongst other flavours, they should be light and fluffy. Around the country, people queue up to buy them from their local bakeries. Statistics show that some 100 million doughnuts are sold on this day. Historically, the reason for making them in large quantities was to use up all the leftover ingredients from the Carnival, particularly fat and eggs, before the start of Lent on Ash Wednesday, where such food was not allowed to be consumed. Pączki are believed to bring good luck for the whole year and the average Pole eats at least two of them on Fat Thursday. A search for ‘Polish Cooking’ in our catalogue will find a number of cookery books which might inspire readers to try and make their own! 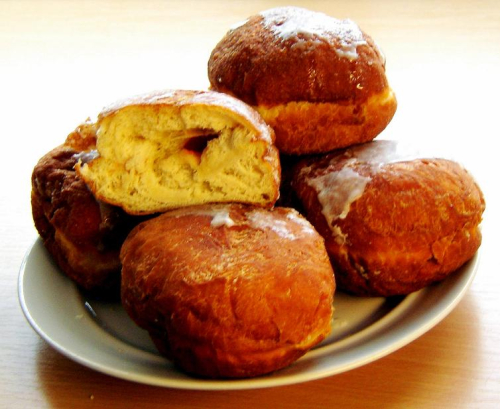 A plate of pączki (Image from Wikimedia Commons)

Fat Thursday is followed five days later by Shrove Tuesday, called Ostatki meaning the last day of Carnival. It is also known as the Herring Night or śledzik, because the most favourite dish to consume that evening is pickled herring. Poles exuberantly celebrate Ostatki by indulging themselves in food, drinks, dance and music. A horse-drawn sleigh ride (kulig) through the snow-covered countryside is a popular way to end the happy Carnival season.

The Shrovetide carnival has a long history in the German-speaking countries There are three broad regional traditions: the Rhineland Karneval, the Alemannic Fasnacht in south-eastern Germany and Switzerland, and Fasching in Bavaria and Austria (the latter two are sometimes grouped together). Within these there are endless local variations, but all involve a spirit of misrule and anarchy which sometimes sits oddly with British perceptions of orderly Germans!

A central organising role is played by the various local Fools’ Guilds (‘Narrenzünfte’) which support and maintain traditional practices, including, especially in the southern regions, the making and wearing of grotesquely carved wooden masks and elaborate costumes. These costumes often represent jesters and fools, but devils, witches, and fantastical figures similar to the ‘Kurents’ of Slovenia’s carnival also feature. Many books are devoted to the history and design of these costumes, and to the traditions of carnival and of the guilds.

Books in the British Library’s collections about Fasnacht traditions in Southern Germany, Switzerland and Austria, with images traditional costumes and masks

In the 19th-century Rhineland, carnival traditions came to be seen as an opportunity to assert local identity and resistance to first French and then Prussian rule. This gave the festivities a more political edge, reflected today in ‘Rose Monday’ processions with floats featuring caricatures of national and international politicians.

But however earnest the political satire or intense the dedication to maintaining local tradition, carnival is primarily about fun, celebration, and a few days when the world is turned upside down.

Posted by European Studies at 2:38 PM