Georgian Collections in the British Library

Georgia has long been represented in the collections of the British Library and its predecessors. We hold Georgian manuscripts, printed books, maps, sound recordings and visual materials as well as a wide range of publications in Western languages relating to Georgia and the Caucasus. We also hold official publications, periodicals and newspapers.

These materials describe Georgian culture at different times and from different perspectives. They also tell a story about British curiosity and the desire to learn and read about lesser-known countries and cultures.

Georgia had strong links with the Classical and Byzantine worlds. This period of Georgian history is well illustrated in the Library’s collections by seven Georgian medieval manuscripts and early Western cartographic material. 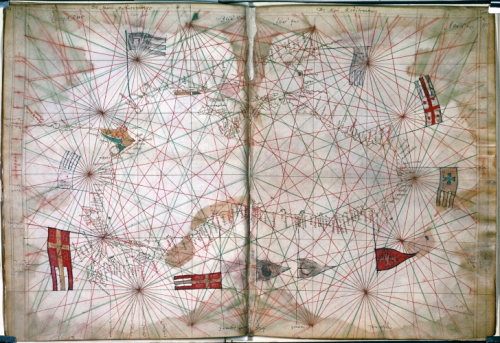 The Georgian flag, among others, appears on this map created in Venice in the 1320s. It is a white rectangle, with a large red cross in its central portion touching all four sides of the flag. In the four corners there are four crosses of the same colour as the large cross.

After the fall of the Byzantine Empire in 1453, the links between Georgia and Europe were lost. Consequently, in the 16th and 17th centuries, Georgia became trapped between Turkey and Persia in their rivalry for domination over Transcaucasia. The King of Georgia, Teimuraz I, sent his envoy, Niceforo Irbach, to Europe to ask for assistance and to seek allies. His ambassadorial mission had little political success, but it did bring about a significant cultural event: the printing of the earliest Georgian books.

These books, printed in Rome by the Propaganda Fide press in the 17th century, are well represented in the Georgian collections. Indeed, we have several copies of them. They are the earliest printed publications in Georgian and they are also the earliest dictionaries and grammar books printed in Georgian. 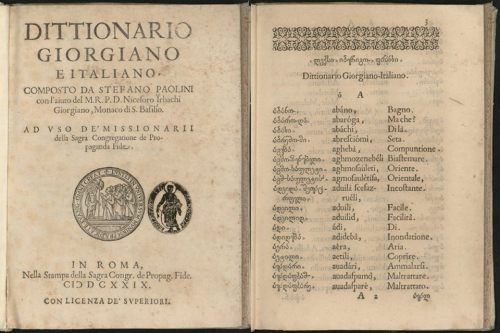 The reports of English and European travellers to Georgia stimulated interest in the country in the 17th century. The desire for knowledge of little-known countries and cultures encouraged the publication of their travel accounts and of maps.

The Library has a number of these early accounts, including the works of Sir John Chardin and Sir Robert Ker Porter. These remained the most important sources of information in Europe about life in Georgia until the early 19th century. 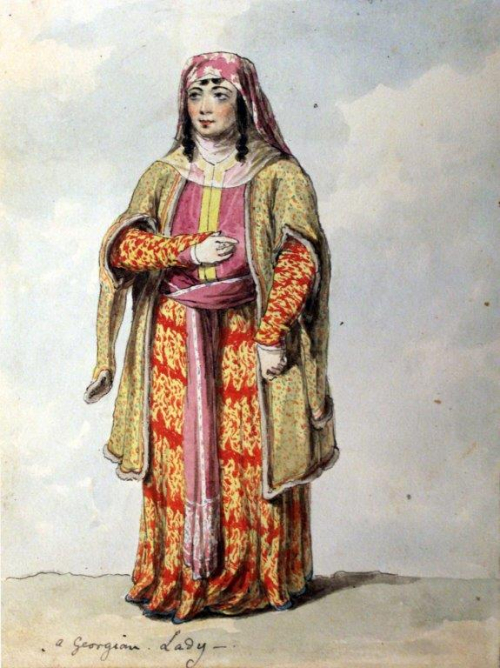 In the 19th century interest in Georgian culture became more academic. This was linked to a more general interest in Asia. The Royal Asiatic Society was founded in London in 1823. The British and Foreign Bible Society was also encouraging its members to study early Eastern Christian manuscripts including those in Georgian. In 1837 the British Museum purchased two Georgian manuscripts: Add MS 11281 and Add MS 11282. 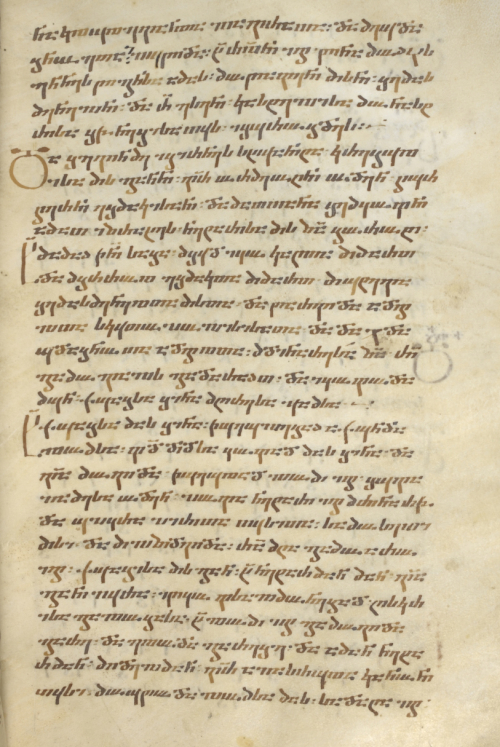 The Library’s collections hold the works of the first British Kartvelologists, researchers on Georgian studies, who initiated the promotion of Georgian language and culture in the second half of the 19th century. They were responsible for the first attempts to introduce Georgian culture to intellectual and research circles in Britain and Continental Europe. 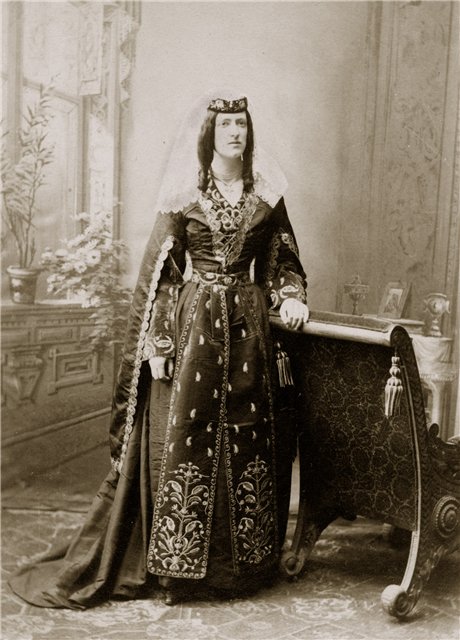 Various aspects of 20th-century Georgian culture and history are reflected in the Library’s collections:

The first sound recordings made in Georgia and the Caucasus, recorded in Tbilisi, 1901-1914, by the Gramophone Company of London;

First editions of writings by the avant-garde artist David Kakabadze, published in Paris in 1924;

Avant-garde books designed and written by Ilia and Kiril Zdanevich;

Georgian émigré newspapers published in Europe and the USA after the Russian Revolution.

We also hold two later manuscript collections. The first, Musha (‘The Worker’: a journal of the socialist-revolutionary party in Georgia), was presented to the British Museum in 1898 by Prince Varlaam Cherkezishvili, a remarkable person who obtained a seat in the Constituent Assembly of the Democratic Republic of Georgia. 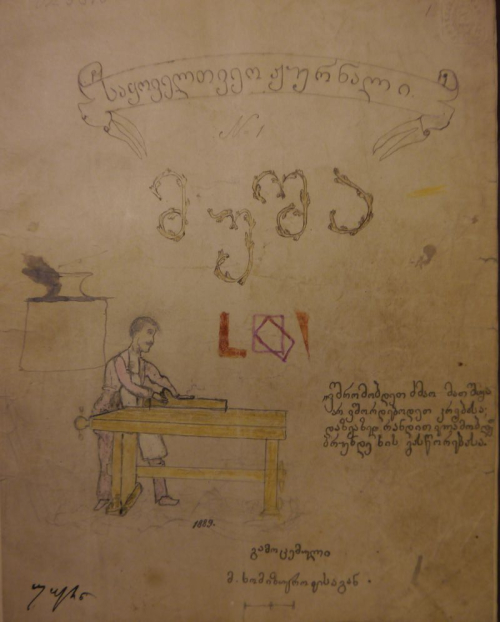 The second, written in the 1950s, consists of a collection of letters and postcards by Grigol Robakidze, a writer, publicist and public figure (Or 16935).

The Library’s Georgian holdings continue to grow in the 21st century. Contemporary Georgian material is acquired in the mainstream humanities disciplines. The emphasis is on reference books, history, art and culture, as well as literature, language, contemporary politics, ecology, etc.. We collect contemporary fiction in Georgian and also acquire translations via Legal Deposit and by purchase.

In addition to ongoing acquisitions of new material, the collection is supported by donations from the public and partners. Most recently, the collections were significantly strengthened by generous gifts from the Art Palace of Georgia - Museum of Cultural History.

Besides extremely valuable publications from the Art Palace, we have also received a collection of Georgian film posters 1934-1985 and four Georgian contemporary illuminated manuscripts. These manuscripts have been created by contemporary Georgian artists and calligraphers. They are original works but executed in gold ink in traditional Georgian style. The Art Palace commissioned these works specially for the British Library to enrich our Georgian collections. 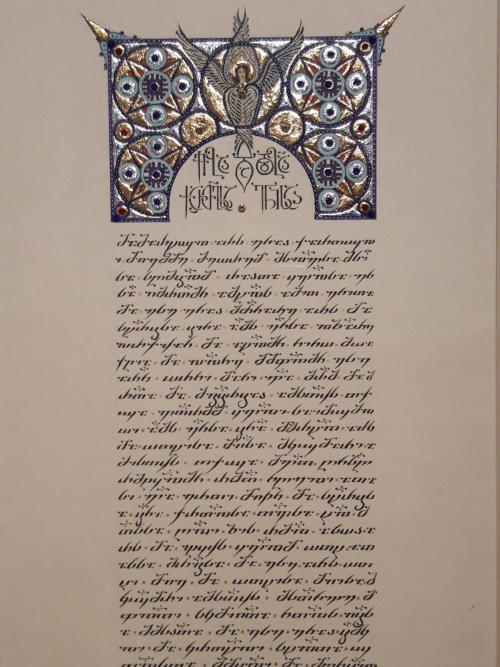 On Friday 25th and Sunday 27 February the British Library in association with Maya Jaggi and Writers’ House of Georgia will present two days of online events as part of the four-day festival Georgia’s Fantastic Tavern: Where Europe Meets Asia. Some of Georgia’s most celebrated novelists, playwrights and screenwriters will be reflecting on Georgia’s artistic legacy on the centenary of the first Georgian Republic and the 30th anniversary of independence from Soviet rule. Further details and booking information can be found here.

The three lives of the Georgian alphabet - European studies blog

Posted by European Studies at 2:59 PM