One of our key roles as curators is to explore the contemporary resonance of the Library’s collections in national and international contexts. I was acutely reminded of this two weeks ago when showing an item at an event connected to the exhibition, Unfinished Business: The Fight for Women’s Rights. Together with colleagues from the European, Americas and Oceania collections, we each selected and discussed an item that we felt spoke to the themes of the exhibition and went beyond its UK focus, before joining the audience for an informal Q&A session.

Beginning with women's suffrage cartoons from a 19th-century newspaper published in Aotearoa New Zealand, the session also introduced our online audience to the cartonera book Afro Latina by the Afro-Brazilian lesbian author Formiga, as well as a work by the 19th-century French writer, feminist and anarchist Victoire Léodile Béra, known as André Léo.

The event was originally scheduled to take place in June 2020 at the British Library but was postponed – along with the exhibition – due to the pandemic and eventually re-conceived as an online session. Like many of the Library’s brilliant online events over the past year, the format allowed us to reach a much larger audience, with close to 100 people tuning in.

The item I presented was an enormous 2-metre long, hand-drawn Soviet wall newspaper, Ialtinskaia Delegatka (The Yalta Woman Delegate). Created by a local women’s committee in Yalta, Crimea, in the late 1920s, it contains reports on their achievements, as well as amateur poetry, drawings and stories intended to inspire and promote communist values.

In the bottom right hand corner is a drawing of a woman carrying out an epic feat of multitasking. She is simultaneously writing (possibly carrying out committee work for the newspaper), cooking, cleaning and watching a child. I find it particularly fascinating as it encapsulates the different – often conflicting and gendered - responsibilities that the new Soviet woman was supposed to balance: those of a Communist citizen, worker, mother and, increasingly by the late 1920s, wife. 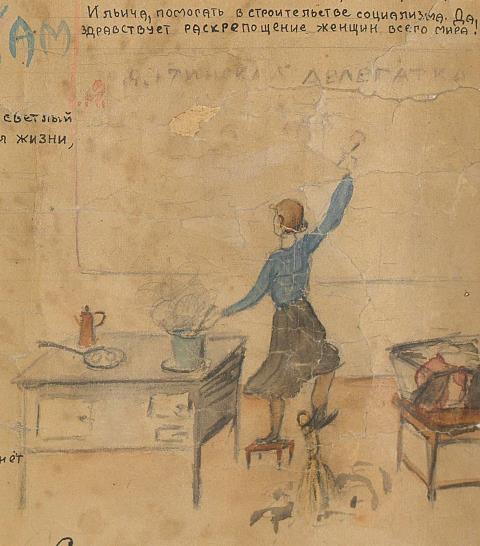 Close up of a drawing from the newspaper of a woman simultaneously writing, cooking, cleaning and caring for a child

The newspaper is important as it gives us an idea of how the 1917 Russian Revolution and the first years of Bolshevik rule affected the lives of many women – as seen from the perspective of women themselves.

The Bolshevik revolution established the legal equality of women and men. In October 1918, legislation known as The Family Code granted illegitimate children the same legal rights as legitimate ones, secularised marriage, and allowed a couple to take either the husband or wife’s name once married. Divorce became easily obtainable, abortion was legalised in 1920, and communal facilities for childcare and domestic tasks were introduced with the aim of relieving women of household chores and dismantling the traditional, nuclear family. In 1919, a Women’s Bureau (Zhenotdel) was established. Its purpose was to disseminate propaganda among working class women and attempt to engage them in public life and the revolutionary process. By the mid- to late-1920s, both public and party attitudes towards family policy had become more conservative. This was partly in response to the social impact of some of the reforms of 1918, particularly de facto marriages, which were seen to in fact create inequality for women.

High unemployment among women in the 1920s and rising numbers of homeless children played a significant role in the return to the more traditional family unit. In 1926 a new marriage law granted registered and unregistered marriages equal rights and placed more emphasis on the obligations that came with marriage. Plans to free women from childcare and housework by creating communal facilities had also failed to fully materialise – as is perhaps clear from the drawing of the multi-tasking woman.

In the 1930s, Stalin further reversed many of the rights granted to women and families in the 1918 Family Code. Abortion was banned, divorce became extremely difficult to obtain, and the law on the rights of illegitimate children was revoked.

Stalin also closed the Zhenotdel in 1930 on the basis that women’s emancipation had been achieved in the Soviet Union and the department was therefore no longer needed. Despite this, throughout the entire history of the Soviet Union, women constituted (on average) only 3–4% of the party’s Central Committee.

Thus, the early Communist vision of women’s equality and liberation was never fully realised. As emphasis shifted back towards the traditional family unit in the 1930s, women were faced with the double burden of combining domestic duties with full-time work.

Although the newspaper had been at the back of my mind before the pandemic, it took on an additional significance in the context of the past year’s events. On seeing the drawing of the multi-tasking woman, one colleague remarked that it gave her goosebumps. Across the world, women are doing more unpaid domestic chores and family care as a result of the pandemic, often in addition to other work responsibilities. According to global data from UN Women, it could wipe out 25 years of increasing gender equality. 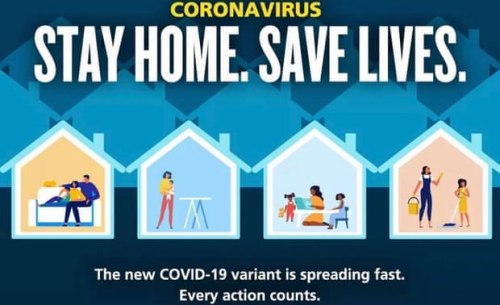 The use of gender stereotypes in the media only serves to reinforce this inequality. Just the day before the event, it transpired that the UK government had withdrawn a ‘Stay Home’ advert after it was criticised for its sexist portrayal of women. The advert showed a woman carrying out domestic chores and home-schooling children while the only man depicted is seen relaxing on the sofa.

The backlash to the advert, along with the countless inspiring stories of activism featured in the Unfinished Business exhibition, demonstrate that the fight for gender equality is far from over.

Although the physical exhibition space is currently closed due to lockdown restrictions, you can discover more about the stories, people and events that have shaped society, as well as the work that remains unfinished, through the exhibition web resource, podcast and fantastic series of online events.

Elizabeth A. Wood, The Baba and the Comrade: Gender and Politics in Revolutionary Russia (Bloomington, 1997)

Melanie Ilic, ed., The Palgrave Handbook of Women and Gender in Twentieth-Century Russia and the Soviet Union (London, 2017).

Posted by European Studies at 10:04 AM