A Burglarious Attempt to Declaw the Lion

This is the first in a series of blog posts marking the 150th anniversary of the Paris Commune, a radical, popular led government in power between 18 March and 28 May 1871.

Parisians woke up on 18 March 1871 to a military operation well underway. Incited by fear of insurrection after a desolate winter of siege, starvation and eventual capitulation to the Prussians, Adolphe Thiers sought to render Paris impotent by removing the cannons littered around the working-class districts of the city.

The sortie to prise away the arms of Belleville and Montmartre would be an utter failure. Arriving at Montmartre at 5:30am, a 6,000-strong force under the direction of General Claude Lecomte overran the National Guardsmen watching over the cannons. However, the troops had not brought a sufficient number of horses to help haul the arms away, and rather comically, were rendered impotent themselves.

By the more reasonable hours of the morning, Parisians had gathered in large numbers. They implored the inert soldiers to ignore their superiors’ orders to fire upon the crowd. Some handed over their rifles and sang ‘arm in arm’ with civilians. When what was happening became apparent, Thiers departed from the Invalides and headed to Versailles, but not before decreeing the army’s complete withdrawal from the capital.

A mass exodus followed, but not everyone got out of Paris. General Lecomte had been seized, as had General Jacques Léon Clément-Thomas. The latter, a prominent figure though the government’s repressions in 1848, had been recognised near one of the newly-erected barricades thrown together across the city. Both men were summarily executed by a crowd which included Lecomte’s former soldiers, National Guardsmen, and local civilians, though not in the solemn manner depicted in the staged photo below by Ernest Eugène Appert, which was not taken until June, 1871. 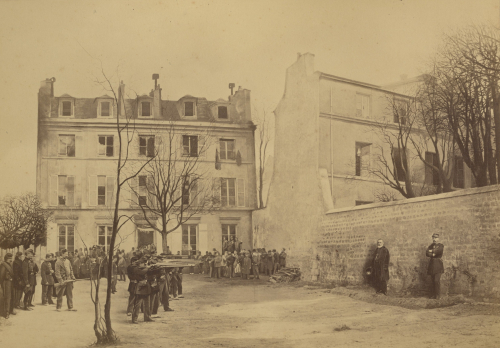 This tumultuous period inspired a boom in the production, distribution and consumption of visual imagery and art of all forms. The British Library holds a rich collection of caricatures and images (14001.g.41, Cup.1001.i.1, Cup.648.b.2 and Cup. 648.b.8) produced during l’année terrible. Most are of French provenance, but the collections include prints from other European locales, most significantly Germany. The illustrations are impressive in terms of their artistic quality but also their sharp critique of a wide range of topics, as no social mœurs, political moment or figure escapes their remit.

The volumes are especially marked by the existence of similar collections across different libraries, including digitised collections at Cambridge and Heidelberg. The bindings and title pages of these collections imply they were each collected and curated by German-born Frederick Justen, who moved to London in 1851 and worked as a bookseller for Dulau & Co, one of the British Museum Library’s suppliers of foreign books at the time.

Though the production of satirical prints had been dominated by journals such as Le Charivari through the 19th century, the fall of Napoleon III and the subsequent winter of despair in the city meant that feuilles volantes, or single sheets, became the premier mode of printing illustrations. Despite this, prints were often produced in sets, and collected together in the years following. Here we see a lithograph, published as the first of a set a three in March 1871, from a printing house on rue du Croissant in the second arrondissement. 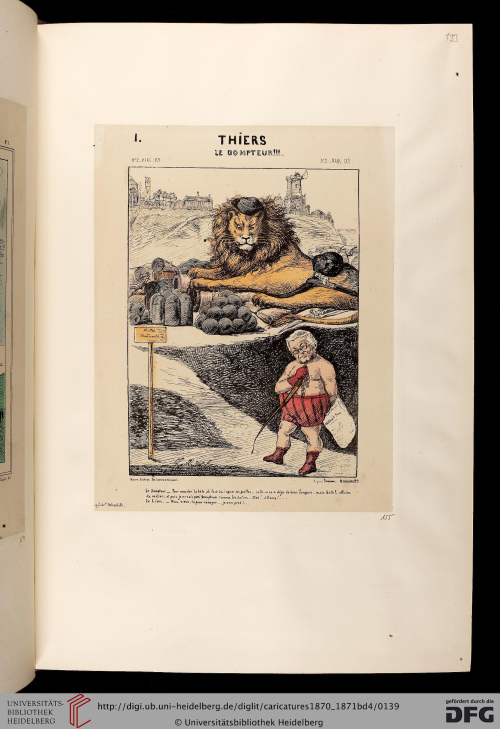 Approaching Paris, here depicted as a majestic lion, resting amongst its weaponry on Montmartre, Thiers looks down at the ground in a deferential manner. He tells Paris that ‘he’s not like the other trainers’ (“je ne suis pas Dompteur comme les autres”). However, behind his back he holds a decree, perhaps a reference to the document of surrender to the Prussians, but more likely to the laws passed by the National Assembly which harshly affected Parisians. For instance, a law passed earlier in March mandated the end of moratoriums on rent and overdue bills accrued in the city during the four months of the Prussian siege. The eagle-eyed amongst you will see that in his right hand, as well as poorly-hidden chains, his trainer’s whip is detailed with the word ‘armée’. No translation necessary.

Paris sees through this vain attempt at nullification. In the final two images of the set, the lion savages Thiers, forcing him to flee to Versailles bloodied and screaming for allies to come to his aid. The whip and decree stay firmly underneath the lion’s paws, and in the final image, a red flag flies next to the victorious Paris, who warns Thiers that next time he will not escape the lion’s claws.

The Toppling of the Vendôme Column - European studies blog