The Gospels of Metropolitan Jakov of Serres

The Four Gospels of Metropolitan Jakov of Serres is one of the most prominent and finely decorated Serbian mediaeval codices, produced in 1354-55, during the greatest ascent of the Serbian mediaeval state, in the reign of Stefan Dušan, King of Serbia (1331-46) and “Emperor of the Serbs and Greeks” (1346-55). This codex has recently been digitized. 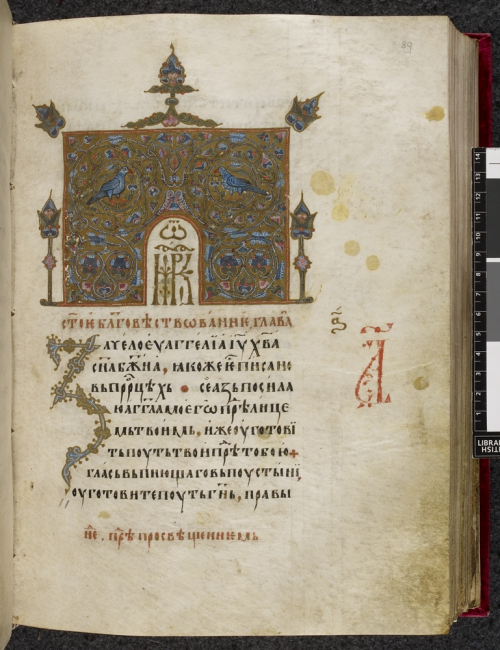 Headpiece of the Gospel of St Mark decorated with birds in coloured vine scrolls on a gold background. A coloured initial with interlace and foliate decoration at the beginning of the Gospel. Add.MS.39626, f. 89r

The military success of Stefan Dušan was crowned with the conquest of the city of Serres in 1345. The Serbian mediaeval state incorporated large parts of the Byzantine Empire, almost all of Macedonia, Khalkidhiki, Epirus and Thessaly, as well as Mount Athos, the centre of monastic and spiritual life.

After the conquest of Serres, Stefan Dušan was crowned Emperor in 1346, and Jakov, the former abbot of the Monastery of the Holy Archangels near Prizren, was proclaimed the Metropolitan of Serres. Jakov remained a Metropolitan until his death, between 1360 and 1365. Shortly after the conquest, the city of Serres became a prominent literary, artistic and political centre of the Serbian Empire, along with other major centres such as Novo Brdo, Prizren, Skopje and Prilep.

The contacts between the Serbian monks, scribes and illuminators and the Greek scribes resulted in the adoption and exchange of stylistic and artistic expressions of the masters in the time of the Palaeologus dynasty of the Byzantine Empire. 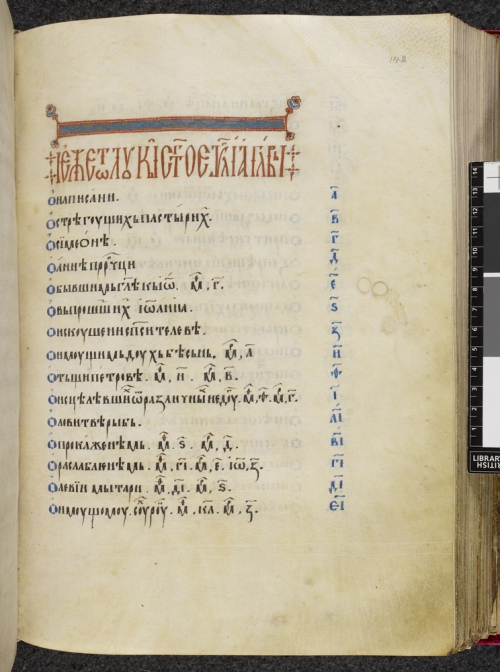 Kephalaia (numbered chapters) to the Gospel of St Luke. Each Gospel is preceded by kephalaia. The heading is in uncial and text is in semi-uncial script. Add.MS.39626, f. 142r

The Gospels of Metropolitan Jakov of Serres was produced on parchment and has 302 leaves and a mediaeval parchment flyleaf. It consists of the four Gospels preceded by a colophon. At the end of the Gospels are synaxarion and menology (lists of Gospel readings for the liturgical year) and octoechos (weekly cycle of hymns). The dimensions of the codex are 315 x 225 mm.

The Gospels are decorated with five large and five smaller head-pieces, four lavishly decorated initials and three drawings in the colophon. 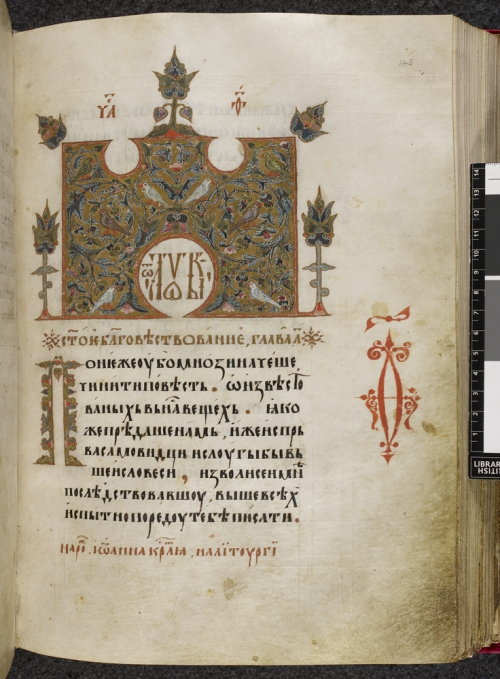 Headpiece of the Gospel of St Luke. The headpiece is painted in the upper part of the page at the beginning of each of the Gospels. Add.MS.39626, f. 145r 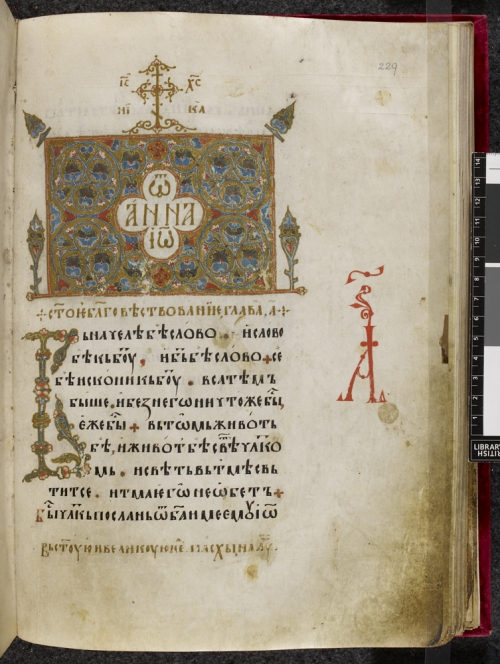 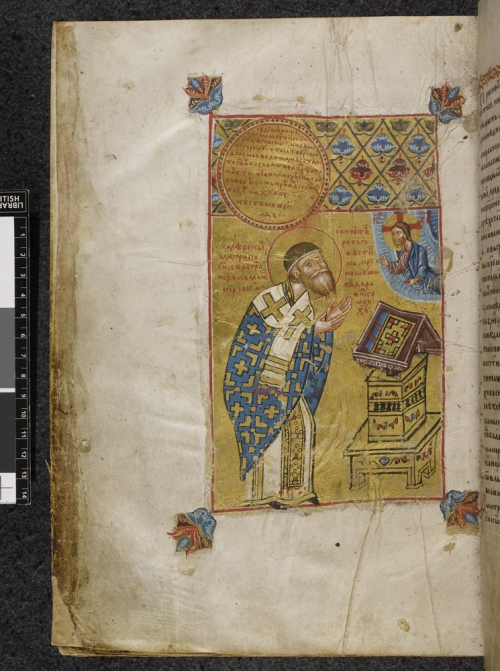 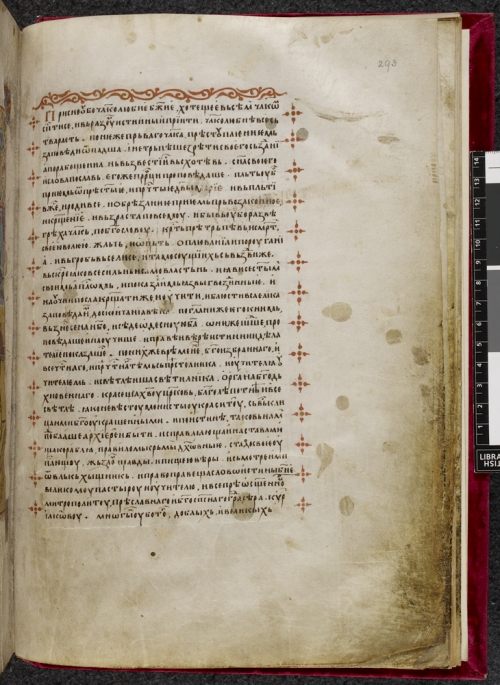 Inscription stating that the codex was made in 1355 for Jakov in his Metropolitan church at Serres, in the time of Tsar Stefan Dušan, his wife Helena, a sister of Tsar Ivan Alexander of Bulgaria, their son the King Uroš, and the Patriarch Joanikije (d. 1354). Add.MS.39626, f. 293

The Gospels of Metropolitan Jakov of Serres were created under his patronage in the monastery of St. Theodore as a product of the Serres scriptorium. The manuscript is written in Serbian Church Slavonic and was the work of a single scribe. In the colophon Kalist Rasoder is recorded as the scribe and the Metropolitan as the patron of the codex.

The researchers’ conjecture is that Kalist Rasoder arrived in Serres from Mount Athos (most likely from the Hilandar Monastery), where he worked under the auspices of the Metropolitan. In the period of Serbian rule the proximity of Mount Athos enabled the close association of the Metropolitanate of Serres and the district lords with the Hilandar Monastery. A sudden rise and increased production of copying and artistic activities occurred in that time. Additionally, the influences of Thessaloniki and Trnovo were of great importance in selecting the letters and rich decoration, especially floral decoration, which is one of the primary characteristics of 14th century manuscripts. 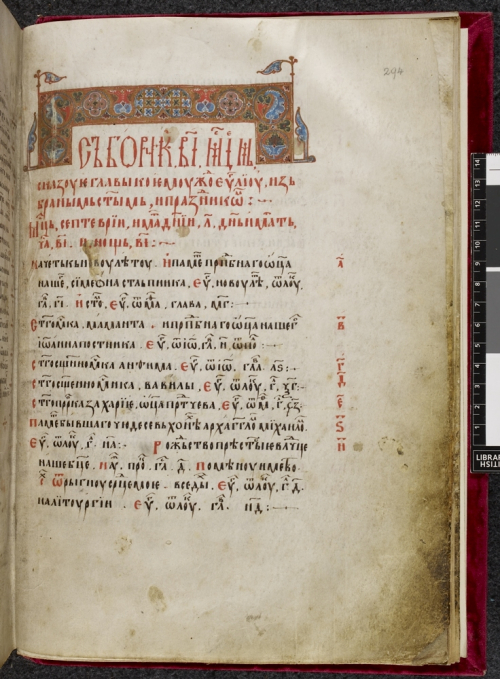 Synaxarion (a list of Gospel readings for the liturgical year) decorated with a coloured headpiece above the text. Add.MS.39626, f. 294r 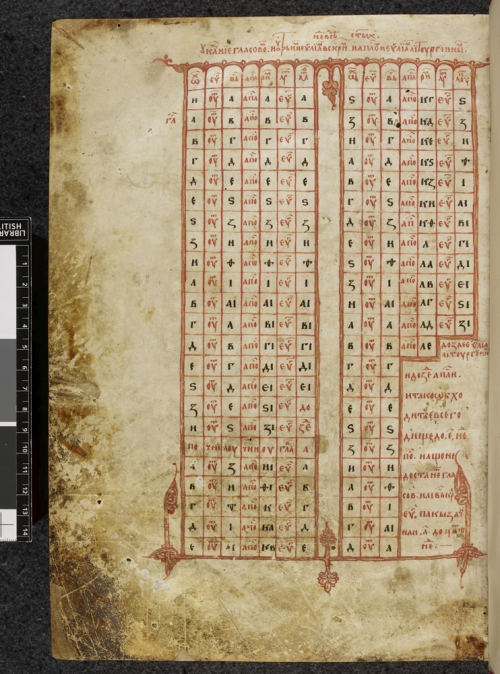 Table relating the lessons to the Octoechos cycle (weekly cycle of hymns) in red and black lettering in a table made of red and gold lines, and decorated with interweaving floral and geometric motifs. Add.MS.39626, f. 302v

This work is considered as one of the most beautiful examples of 14th-century manuscripts produced in the lavish art style during the reign of the Palaeologus dynasty. It is assumed that the Gospels of Metropolitan Jakov of Serres were donated to the monastery of St. Paul in 1365, while this area was still under Serbian rule. The significance and value of the manuscript was recognized by the Hon. Robert Curzon (1810-1873), traveller and collector of manuscripts, in the first half of the 19th century. During a visit to the monastery of St Paul on Mount Athos the codex was presented to him together with the Gospels of Tsar Ivan Alexander.

These codices were later bequeathed to the British Museum Library (now the British Library) in 1917.

Posted by European Studies at 11:55 AM