The Toppling of the Vendôme Column

This is the second in a series of blog posts marking the 150th anniversary of the Paris Commune, a radical, popular led government in power between 18 March and 28 May 1871.

Following Adolphe Thiers’s botched attempt to neutralize Paris as detailed in our first blog, by the middle of April, 1871, the Paris Commune was in full swing. The municipal government, elected on 26 March, almost immediately cancelled rent arrears accumulated during the Prussian siege, proclaimed the separation of church and state, and imposed a maximum salary of 6,000 francs for public employees.

However, the communards were not satisfied with attempts to redress only economic and social inequalities. Seeing itself as a vehicle to remold the space of the city in its own image, on 12 April, the Commune decreed that the Vendôme Column, raised in 1810 as a celebration of Napoléon’s victory at Austerlitz five years earlier, was to be pulled down. Living with the destructive legacies of Haussmann’s glittering metropolis, the Commune’s decree was to be one of its most emotionally resonant for both those it infuriated and those it amazed.

Topped by a statue of Napoleon dressed in the robes of Caesar, for the communards, the column represented an intolerable history of imperialism, false glory and a perpetual threat to international fraternity. In short, the Commune’s decision to remove the statue is reflective of its attempts to restart history, a history not born in blood and brutality. 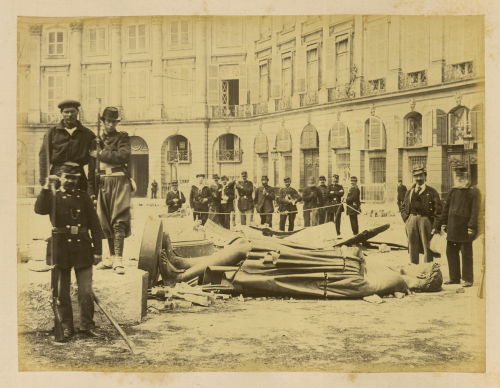 Statue of Napoleon I after the Fall of the Vendôme Column, Picture by Bruno Braquehais, from Wikipedia Commons

The column was taken down on 16 May. It was a day of spectacle for the communards, who organised music and speeches following the toppling of the monument. For those who were infuriated by the destruction of the monument, the event was repeatedly used as a reference point of loss, considering it an attack on the heart and soul of their France. On the eve of leading his troops into Paris the following month, General MacMahon made clear that not even the Prussians, who had spent the winter bombarding the city with shells, had dared to take the column down.

The toppling constituted one of the most symbolic moments of the Commune, and artists from various disciplines used it as a touchstone for their work. This is particularly true for caricaturists, who employed their skills as polemicists to great effect in a moment that emphasised the great divide.

Gustave Courbet, realist artist and member of the Commune government, was neither the first to suggest that the column should be pulled down, nor was he the most strident supporter of the decree. Nevertheless, this did not save him from the pencils of the anti-Communard caricaturists who savaged him repeatedly. 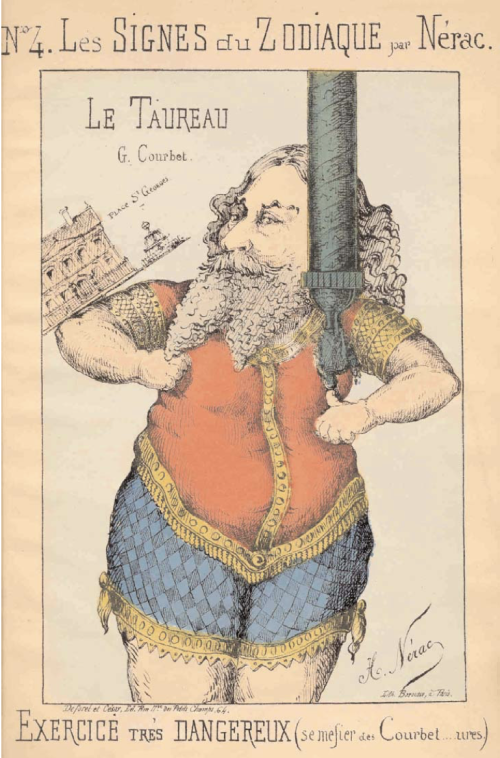 Signs of the Zodiac, by Nerác, from Morna Daniel’s eBLJ article

This piece drawn by Nerác is located in Volume 5 in the largest set of the British Library’s collection of caricatures from the Franco-Prussian War and the Paris Commune (14001.g.41). It is part of a set which depicts famous communards as various signs of the Zodiac, with others including the Commune and Prussia as the twin evils of Gemini.

Courbet, le Taureau (the bull, Taurus), is dressed in garb reminiscent of a circus performer, while balancing the inverted Vendôme Column on his thumb. On his other arm, he balances an expensive-looking home equipped with a fountain, entitled Place St. Georges. This is most likely a reference to the home of Adolphe Thiers, ceremonially destroyed a day before the toppling of the monument as a reprisal for the shelling of the city by the Versaillais army.

The bottom text similarly reads like an enticing advertisement for the circus, willing us into paying attention to the very dangerous acts being performed in front of us. The caricature warns us to beware of not only Courbet, but also of the courbatures (body aches) involved in such balancing acts.

These caricatures are ironically juxtaposed to acts of wanton destruction the Versaillais committed to both property and, more importantly, on the thousands of people they massacred when taking back the city. The communards did not have a monopoly on destruction of public space for their own ends. A new column on Place Vendôme was raised in 1874, for which Courbet was charged the fee of 323,000 francs – a fee he obviously could not pay, and thus he fled to Switzerland, dying in alone and in poverty in 1877.

Another permanent reminder came when the founding stone of the Sacré-Cœur was laid on Montmartre in the summer of 1875. The basilica, still overlooking the city almost 150 years later, was intended as a constant reminder of the so-called ‘crimes of the Commune’. In a time where people are once again rightfully questioning aspects of the public space they exist within, we are reminded that there are brutal remnants of the past everywhere we look.

Posted by European Studies at 8:59 AM