The Fiery End of the Paris Commune

This is the third in a series of blog posts marking the 150th anniversary of the Paris Commune, a radical, popular led government in power between 18 March and 28 May 1871. Discover the first two posts (A Burglarious Attempt to Declaw the Lion and The Toppling of the Vendôme Column) on our blog.

On the evening of 21 May, Versaillais troops climbed over the tattered south-western fortifications of Paris, and the week which would define the Commune began. Known as la semaine sanglante, or Bloody Week, Paris would suffer a ferocious bloodletting.

By the next morning, the Arc de Triomphe flew a tricolour rather than the Commune’s red flag. While the communards had hastily built hundreds of poorly-constructed barricades in the boulevards, some 110,000 troops marched through the city, amongst which were thousands of prisoners of war released by Prussia.

The communards grew disillusioned with the situation. Attempts to trade prisoners with Thiers had been repeatedly denied. The Parisians sought Auguste Blanqui, a legendary figure of French radicalism through the nineteenth century, in exchange for all 74 prisoners held by the Commune, including the liberal archbishop of Paris, Georges Darboy. The repeated rejections, as well as continuous reports on the brutality of the Versaillais troops, saw Darboy and five fellow clerics killed on the night of 24 May. These executions provoked outrage.

The death of Darboy is a key point of anti-Commune propaganda, but it was far from the only one. A slew of reports and images followed the Versaillais march through Paris, as myth-making began to efface the thousands who were killed by the encroaching troops.

Fires which could be seen for miles around engulfed Paris and accompanied the march. Historians generally believe the initial fires to have been started by the missiles launched into Paris by the Versaillais, as well as some being set by Parisians to cover their retreats further into the north-western arrondissements as the army slowly took the city back. They left the city in ruins, with several of the city’s key cultural sites including the Tuileries Palace, the Hotel de Ville and Louvre, partially or completely destroyed. 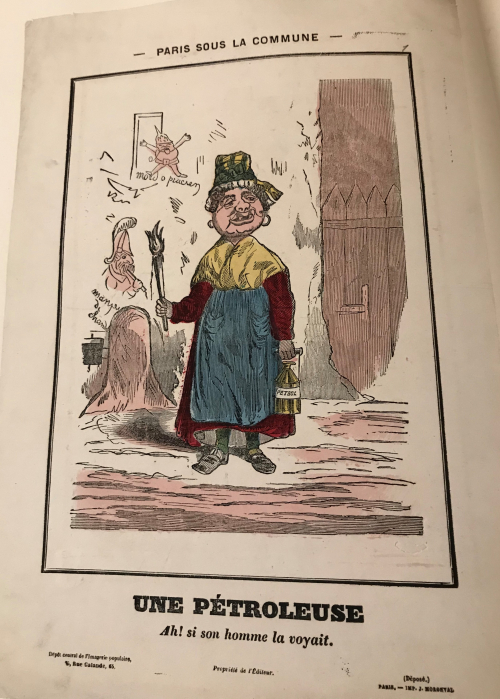 The denigration of the Commune rose from the ashes of la semaine sanglante. After the final conflicts around Belleville in the north-west of the city, a wave of conservative imagery made clear who they thought were responsible for the fires. Laying the blame of the destruction of Paris on the so-called ‘pétroleuses’, the image above captures the essence of this discourse. We see a woman with almost pig-like features, almost certainly an artistic device to dehumanise her. She carries a torch and a can of petrol, presumably looking for some cultural asset to destroy or some aspect of natural order to subvert.

The caption further indicates the double crime these women were accused of committing – first, the crime against the state and the status quo, and secondly, the crime against her family, her husband and the natural order. The pétroleuse is amongst the most prominent devices of anti-Communard prints, and she is repeatedly invoked to remind viewers of the supposed horrors of women who did not conform to gendered expectations. 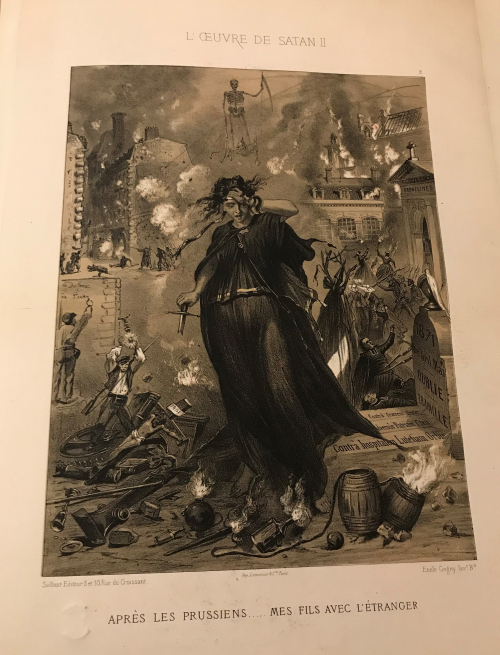 ‘After the Prussians… My sons with the stranger’ By Emile Gogny, Paris: Imprimerie Lemercier et Cie (1871)

The crimes of the Commune are made clear in this wonderfully macabre print. An aghast female warrior grasping her broken sword looks down at the ground in front of her, to see a range of incendiary devices. Around her, a deluge of destruction emphasises the various aspects of the Commune’s sins.

To the left, we see a communard about to use a holy relic to smash Jesus on the crucifix. Above this morbid scene are soldiers in combat on the boulevards of Paris. To the right we see the corpses of clergymen, punctured by bayonets. In the top right, we see the infamous pétroleuses, setting fire to the buildings of Paris. At the top, we see Death, looking down upon all that is his, scythe in hand. This is a powerful image that reminds us of the forcefulness of anti-Commune propaganda, and that the caricature and print collection at the British Library (14001.g.41, Cup.1001.i.1, Cup.648.b.2 and Cup. 648.b.8) does not just contain humorous lampoons of political figures, the public, and their idiosyncrasies.

Absurd bloodshed marked the end of the Commune. The remaining embers of resistance were routed on 28 May, and thousands of prisoners were executed in public sites which today remain, often without a trace of this barbarity. One of the few memorials is at Père Lachaise cemetery, resting place of Jim Morrison, Edith Piaf and Oscar Wilde, where a simple plaque commemorates 174 National Guard members shot against the wall, and the rest of the deaths through la semaine sanglante. The four thousand who survived were transported across globe to live in France’s penal colony, New Caledonia, before a general amnesty in 1880.

The Commune did not die on 28 May, 1871. The myth of the female fire starters fuelled fears of social revolution across the globe for decades after the fires of Paris, and the pétroleuse is still synonymous with 1871. The Commune itself has a complex role in the French memory. Through this year, Paris’s municipal government has controversially staged events to commemorate the Commune. It remains prescient that people will die for a cause they believe in while others prioritise of cultural and social losses over the losses of human life. Far beyond dying, 150 years later the Commune still leaves no one neutral.

Posted by European Studies at 10:23 AM