The British Library holds the largest collection of printed material on the French Revolution outside of France. As we know the French revolution was not limited to France but affected the historical trajectory of numerous countries in Europe and around the world. One of the first European areas where French revolutionary ideals found a fertile soil was the Italian peninsula. In 1796 the French Army, led by the young general Napoleon Bonaparte, defeated Austrian and Sardinian troops. On 15 May 1796 Bonaparte entered Milan, which rapidly became the most active political laboratory of the peninsula.

Giovanni Antonio Antolini, plans for the Foro Buonaparte in Milan, city side, c. 1801. Part of Napoleon’s ambitious but unfulfilled plan for remodelling the city of Milan (Image from Wikimedia Commons

During the revolutionary Triennio, the period between the arrival of the French troops led by Bonaparte and the French defeat in 1799, there was a veritable explosion of print culture: 40 new periodicals in Milan, ten newspapers printed in Venice in 1797 alone; 20 serial publications in Genoa, and smaller centres such as Brescia or Ferrara also produced their own revolutionary newspapers. The British Library holds two periodicals that are exemplary of this Italian revolutionary press: the Giornale della società degli amici della libertà e dell’eguaglianza (‘Journal of the Society of Friends of Liberty and Equality’) and the Osservator piemontese (‘Piedmont Observer’). 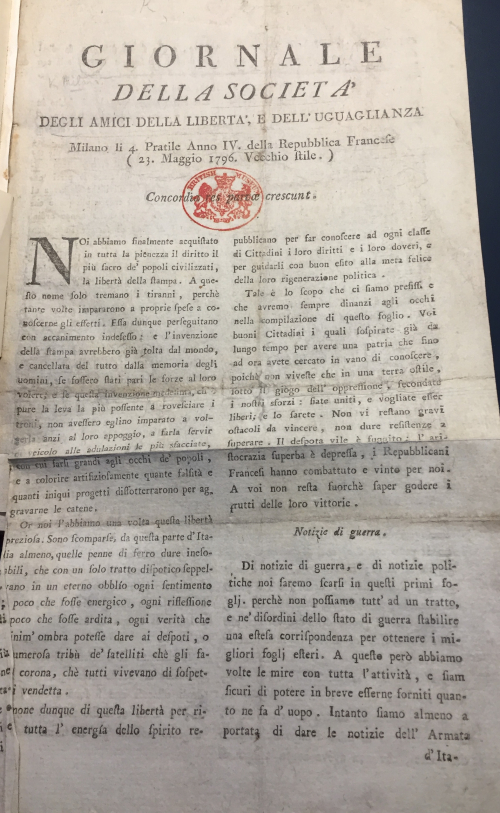 The first newspaper was the work of the physician Giovanni Rasori, a vocal supporter of a democratic republic. Rasori had travelled to Britain and France, and his newspaper reflected his familiarity with the two countries. Translations of French or English works appeared frequently, such as Volney’s Ruines or tracts by radicals, such as William Morgan’s Facts Addressed to the Serious Attention of the People of Great Britain Respecting the Expence [sic] of the War and the State of the National Debt (London, 1796; RB.23.b.7561). In a similar vein the Osservatore piemontese published long extracts from Joseph Priestley’s Lectures on History and General Policy (Birmingham, 1788; 580.h.16).

Both newspapers presented the Italian translations of British works through the intermediary of a recent French translation. Rasori translated Morgan’s work as it appeared on the columns of the Parisian Moniteur Universel (Gazette nationale, ou, le Moniteur universel France, Paris, 1789-1810; MFM.MF17), while the authors of the Piedmontese newspaper commented and published large excerpts of Priestley’s work which had been translated into French in 1798. 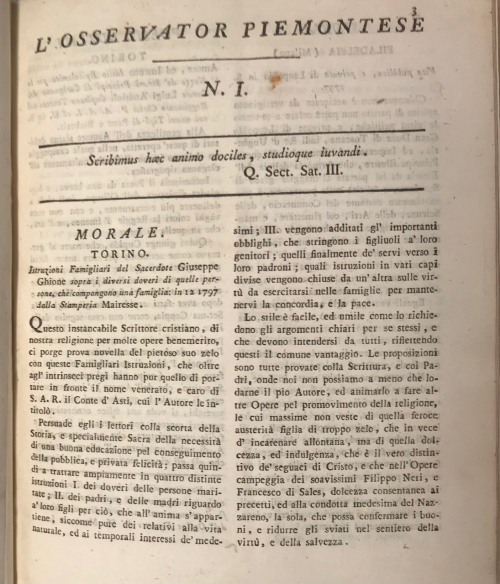 The arrival of the French armies in the Italian peninsula favoured the publication of works that were previously forbidden. The translations of these texts appeared in periodical publications thus making more difficult for researchers to find them. These texts were partially reprinted in periodical publications, as those presented above, or were collected in anthologies such as the Biblioteca dell’uomo repubblicano. The British Library holds the prospectus for this anthology published in 1797 in Venice (awaiting shelfmark). The ambitious plan was to print 15 volumes containing the main works of philosophers like Rousseau, Voltaire and Mably. However the Peace of Campo Formio (27 October 1797), when France ceded Venice to the Austrian Empire, put an end to this effort of creating a first comprehensive compilation of political thinkers crucial to understanding the political basis of the French revolution.

The brief interlude of the Italian republics was not an ephemeral season in the Italian history. On the contrary the last years of the 18th century served as the basis of the development of new kinds of Italian political thinking, rooted in a lively exchange with other European traditions such as the French Enlightenment and the British radical movement.

Posted by European Studies at 10:50 AM