This post is part of our 'Inheritance Books' series, where colleagues choose an 'inherited' item that was already in the library when we started working here, and one that we have acquired or catalogued for our collections during our own time to 'pass on' to future users, visitors and colleagues, and explain why they're important to us.

When I started as a cataloguer, the debut novel De avonden by Simon van het Reve, pseudonym of Gerard van het Reve, was already in the collection. The subtitle ‘een winterverhaal’ (a winter’s tale) suggests sitting around a warm fireside telling stories of legends. Instead of being set in homely surroundings, the novel is set against the cold of winter outside and characters forever lighting a stove inside. The protagonist is called ‘de held van deze geschiedenis’ (‘the hero of this story’) but he is not heroic. The tone of the novel would have been much darker if it was not for the irony and humour as expressed by the subtitle and continued throughout the novel. 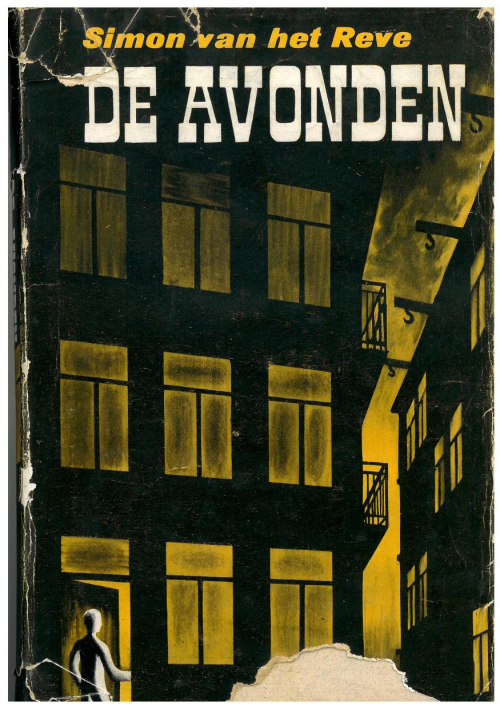 The story describes ten days in the life of Frits van Egters, a 23 year old office clerk, during December 1946. These ten days are written in ten chapters and are also the last ten days and evenings of the year. The strength of the novel lies in how it has been written rather than what happens. Ironically the ‘narrative’ of the story is that nothing happens: there is no action, everything is static ‘de lege uren’ (empty hours) and expressed for instance by constantly checking clocks and watches that hardly seem to move. It is static because the focus is on the introspection and self-analysis of the protagonist. This leads to a sense of entrapment, disillusionment, loneliness and is exaggerated by Frits’s cynicism. Much of this negativity is expressed in his relationship to animals and his parents but also in disturbing dreams. What makes the novel interesting is the way it has been written with a clear focus on realistic detail. 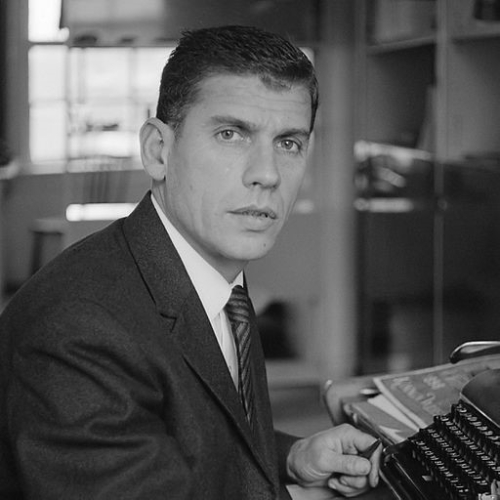 Although De avonden has much to offer to any reader in any language, it took nearly 70 years for the novel to be translated into English. Tim Parks, novelist and translator, ends his review of the translation: “So, huge respect to Pushkin Press for finally doing the business, and in particular to Sam Garrett for a translation that avoids a thousand pitfalls to give us this enfant terrible of Dutch genius in an entirely convincing English.”

In the 15 years that I have been cataloguing Dutch books, there is one publication that stands out in particular. It is a six volume work of the complete letters by Vincent van Gogh: De brieven: de volledige, geïllustreerde en geannoteerde uitgave. This edition is the product of 15 years of research by the Van Gogh Museum  and the Huygens Institute.

There is also a freely available web edition of Van Gogh’s complete letters. All letters have been translated into English and are extensively annotated and set in their biographical and historical context.

Van Gogh regularly embellished a letter with a small drawing or enclosed a freehand sketch. “The value of the sketches lies in the fact that they forced him to depict the essence of a drawing or painting. He usually drew them with ordinary writing ink, and in some cases he added colour notations, which can be compared to the actual paintings.”

In a letter of 6 April 1885, addressed to his brother Theo, he wrote, “I desire nothing other than to live deep in the country and to paint peasant life … I plan to make a start this week on that thing with the peasants around a dish of potatoes”. In a letter written 3 days later, he includes a small drawing of the ‘Potato Eaters’. 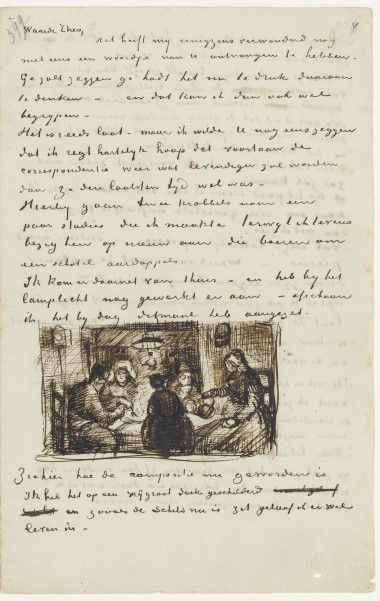 Sketch of Potato Eaters in a letter of 9 April 1885

The scene is set in Nuenen in his home country of the Netherlands. The colours are dark and earthy unlike the bright canvases that most people are familiar with and that belong to his later works. In this same letter, Van Gogh shows an awareness of characteristics of his work that will come to define in particular his later works. He writes: “I see a chance of giving a felt impression of what I see. Not always literally exactly — rather never exactly — for one sees nature through one’s own temperament”.

A good example of a ‘felt impression’ of what Van Gogh saw is the painting of his bedroom. Vincent was living in Arles, France at the time. In a letter to Theo of 16 October 1888, he gave a very detailed description of his bedroom in particular of the colours used and also included a detailed sketch:

The walls are of a pale violet. The floor — is of red tiles.
The bedstead and the chairs are fresh butter yellow.
The sheet and the pillows very bright lemon green.
The blanket scarlet red.
The window green.
The dressing table orange, the basin blue.
The doors lilac. 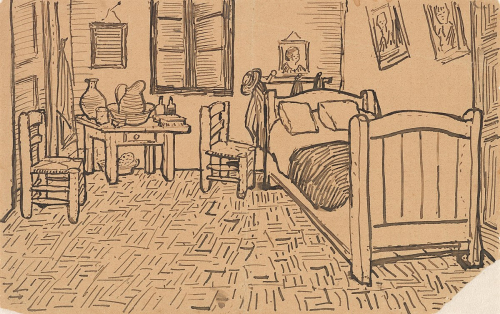 Vincent van Gogh died on 29 July 1890. In the last few years before his death, the range and intensity of colours in his paintings increased dramatically confirming what he had stated five years earlier: “for one sees nature through one’s own temperament.”

Posted by European Studies at 10:18 AM