Ten Years on from 22 July: The Cultural Imperative to Remember

Like other contemporary acts of terror, the traumatic events that befell Norway on 22 July 2011 are commonly referred to in Norway by their date alone. As we approach the tenth anniversary of that day public, cultural, and scholarly reflections continue to abound, a decade’s distance precipitating not just further responses to the awful act but also reflections on the responses themselves. The purpose of this post is not to describe or focus on the traumatic events of 22 July 2011 but to attempt an overview of these responses, with an expanded list of references, and discuss how the cultural memorial process has developed.

Two publications recently acquired by the British Library go some way towards anthologising the artistic and literary responses that have figured in the shaping of the cultural memory, a concept which Astrid Erll defines broadly as ‘the interplay of present and past in socio-cultural contexts’. The compilation of attempts to come to terms with 22 July captures the multiplicity, the plenitude, and the unending nature of memorialisation, or what Erll simply calls ‘different modes of remembering identical past events’. Norway’s official memorial processes and their inevitable complication, or sometimes rejection, are testament to the tensions between individual and collective memory, between progressive and tragic memory narratives, and between symbolic expressions and the urge to return to the raw facts. Bearbeidelser: 22. Juli I ord og bilder (edited by Anne Gjelsvik), where ’bearbeidelser’ might be translated as ‘processings’ or ‘comings to term with’, includes responses to the tragedy by writers such as Vigdis Hjorth and Karl Ove Knausgård alongside analysis of these contributions by academics. Ingvild Folkvord’s Stemmene etter 22. Juli (‘Voices after 22 July’) again looks at the responses to the event through ‘voices’, whether in poetry, on the radio, social media, or the courtroom. They build on and contextualise earlier anthologies such as Respons 22/7, which brought together immediate reflections in 2011. These are books ‘about and with artistic attempts to come to terms’ (Gjelsvik), embodying the idea that memories of collective trauma necessitate a simultaneous interrogation of memorialising, as society is anxious to do justice to the victims and to perfect a process to ‘never forget’.

That process began in the immediate aftermath of the attacks as thousands gathered outside Oslo Cathedral with flowers and candles, the ‘blomsterhavet’ (sea of flowers). This spontaneous manifestation of mourning and defiant collectivity developed into more such acts like the ‘rose marches’ on the mainland near Utøya, all of which were embraced and encouraged early on by officials tasked with developing a memorial process. Five months after the attacks, the Norwegian government announced that two national memorial sites would be created in Oslo and in Hole near Utøya, a process led by KORO (the body responsible for the ‘production, collection management and public-engagement activities relating to art in public buildings and other public settings’. Memorial sites have emerged over the decade, none more famous and divisive than Jonas Dahlberg’s Memory Wound, the winner of the main memorial competition. Dahlberg set out to cut through the Sørbråten peninsula creating a new inaccessible island, on which the names of the victims could be carved, visible from the headland but unreachable. The project met with huge resistance from the local community leading to its eventual abandonment. The fate of this and other memorial sites are detailed by the 22 July Centre, part of the research project ‘July 22 and the Negotiation of Memory’ based at Norwegian University of Science and Technology, focusing on the ‘cultural afterlife of the terror attacks’. Their websites are an excellent source of information on all the memorial initiatives that exist and continue to be inspired, including the programme for this year’s anniversary. 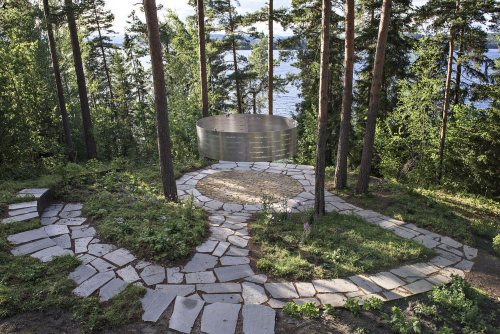 In different ways, two of the more universally appreciated memorials focus on the specific event, the ‘reality of suffering’, rather than the aesthetic of an ‘epic symbol’ of trauma, as critic Kjetil Røed says of Memory Wound. Lysning (The Clearing), designed by architects 3RW, is a large, raised metal ring featuring the names of the victims, positioned in a contemplative, private spot on Utøya. Ahmad Ghossein’s Relocating the Past resurrects on the opposite side of the street a newspaper display panel smashed by the bomb in the first attack at Oslo’s government quarter, with copies of newspapers published on 22 July 2011. Both are quiet, powerful and harrowing, one an almost spiritual memorial to the victims, the other integrating catastrophe into the banal and everyday. Both take you to 22 July 2011. 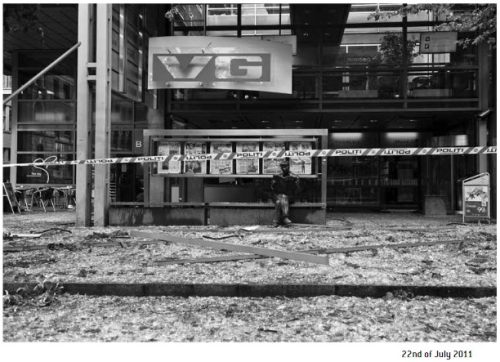 Relocating the Past memorial

Undoubtedly ‘different modes of remembering’ in approaches to public memorials also play out in what is referred to as the sub-genre of ‘22 July literature’. A best-selling example of the sobre, detailed, journalistic recapitulation of events is Åsne Seierstad’s En av oss (One of Us). Seierstad states that, ‘Everything in this book is based on testimony. All the scenes are constructed according to witnesses’ accounts.’ The account plots the history of several victims against the perpetrator’s own before precisely detailing the events of 22 July, the aftermath and the trial. Seierstad comprehensively rejects any suggestion that the perpetrator was ‘one of us’, a product of Norwegian society like the victims themselves: ‘This is also a book about looking for a way to belong and not finding it. The perpetrator ultimately decided to opt out of the community and strike at it in the most brutal of ways’.

En av Oss has been challenged for that rejection, ruling out as it does the idea that something fundamental within Norwegian politics and society gave rise to the attacks, or even that they were ideologically motivated rather than the aberration of a pathological character. Books such as Sindre Bangstad’s Anders Breivik and the Rise of Islamophobia argue ‘not that Norway is a society that is exceptionally racist, but rather that Norway should be seen as unexceptional in this respect, and therefore as confronting the same challenges regarding racism, intolerance and discrimination as other western European societies in the modern era’. Given the success of the right-wing Progress Party in the first elections after 22 July 2011, commentators point to the attacks being an extreme manifestation of the negative views of social democracy, women’s rights, migrants and Islam that ‘have gained popularity and become increasingly mainstream’ (Rees). Seierstad’s objective is however to centre the event and to platform victim testimonies. As Karl Ove Knausgård writes in his positive review, ‘that day becomes something concrete, not a phenomenon, not an affair, not an argument in a political discussion but a dead body bent over a stone at the water’s edge. And, once again, I cry. Because that body has a name, he was a boy, he was called Simon. He had two parents and a little brother. They will mourn him for the rest of their lives’. Knausgård’s conclusion marks the difference between a cultural memorial process and socio-cultural analysis, both of which are surely necessary in the national process of coming to terms.

Centring victim perspectives and supporting survivors has been the approach of film responses to the event. Two films were released in 2018: Paul Greengrass’s July 22, based on Seierstad’s book, and Erik Poppe’s Utøya: Juli 22. While the first decided to feature the perpetrator, Poppe’s film is a near-single-shot of events solely through the eyes of those attacked. In 2020 six-part TV drama 22 Juli brought journalists, police and medical professionals into the picture. Perhaps the most well-received film project has been Reconstructing Utøya, in which ‘four of the survivors relive their painful memories, convinced of the importance of remembering’. They are joined by twelve young Norwegians and a psychologist in an empty monochrome film studio, as the trauma of 22 July is reconstructed, processed and documented on screen without any frills. Of course, these films are insertions into the national mourning narrative but, especially in the case of Reconstructing Utøya, they remind us of the very real and specific trauma of the survivors. As the recent outputs from a long-running research project at the Norwegian Centre for Violence and Traumatic Stress Studies show, many survivors struggle with post-traumatic stress a decade on.

The focus on testimony and fidelity to the events and experiences is one way of doing justice to the victims and of processing the trauma. It runs the risk, as indicated above, of evading analysis of the political and ideological threads that also need to form part of that processing. The focus also risks doubling down on trauma so that the victims become victims again and again. Lastly, it might also narrow the possibilities of working through trauma, something creative fiction might work against. Jan Kjaerstad’s Berge (2017) is on the face of it about a murder case from 2008 but it is considered firmly a part of 22 July literature, arguably acting as a ‘literary experiment capable of “opening up” the public debate on what happened on and after 22 July’ (Folkvord and Warberg). Likewise, Vigdis Hjorth’s Leve posthornet focuses on events prior to 22 July, yet its references to it are unmistakable. The selection of ‘22 July literature’ listed below includes texts that show how creative approaches, narratives that allow themselves to go beyond the events or to spin off them obliquely, complicate the official cultural memory process, with its progressive national ‘vi-et’ (we-one) narrative and its potential towards ‘national innocence’.

This blog is only a selective overview of the cultural memory of 22 July, which will continue to build and reshape itself as years pass. Official memorial sites, journalistic, forensic accounts of the events, trauma narratives, and creative fiction are all necessary layers of a necessarily complicated collective and individual process. Any single approach is insufficient in itself, requiring the ecosystem of conflicting interpretations to reflect the full picture. And yet always ‘det er noe som mangler’ (there is something missing), as Kjaerstad writes in Menneskets vidde. And the sheer loss brought on Norway on 22 July resonates through the loss, the lack at the heart of those attempts to come to terms. There is always something missing.

The sources below represent a selection of material available online or in the British Library’s collections.

‘July 22 and the Negotiation of Memory’

Dorthe Refslund Christensen and Kjetil Sandvik, ‘Death in Times of Secularization and Sacralization: The Mediating and Re-Mediating of the Utøya Tragedy in the Norwegian Public Sphere’, in ibid. (eds.), Mediating and Remediating Death (London, 2016), ELD.DS.62556.

Cora Alexa Døving, ‘Homeland Ritualized. An Analysis of Written Messages Placed at Temporary Memorials after the Terrorist Attacks on 22 July 2011 in Norway’, Mortality, vol. 23, no. 3, pp. 231-246.

I Hjorth and L Gjermshusengen, ‘Et minne i bevegelse’, Tidsskrift for Kulturforskning (2) (2018).

Posted by European Studies at 9:54 AM