The current struggle can only end with the triumph of the popular cause [...] Paris will not retreat, because it carries the flag of the future.

These words are taken from the manifesto of the Paris Commune’s largest and most effective organisation, l’Union des Femmes pour la défense de Paris et les soins aux blessés (the Women’s Union for the Defence of Paris and Care of the Wounded). 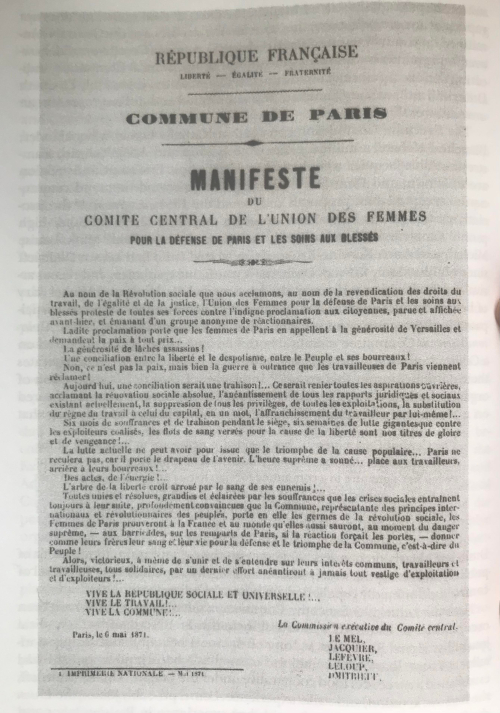 ‘Manifesto of the Women’s Union for the Defence of Paris and Care of the Wounded Central Committee’, taken from Carolyn Eichner, Surmounting the Barricades: Women in the Paris Commune (Bloomington (Indiana), 2004) C.2006.a.8599.

The final signatory, Dmitrieff, belongs to one of the most interesting and important actors through the Paris Commune, the socialist and anarchist insurrection which toppled the hegemonic order for 72 days in the Spring of 1871.

Born in Saint-Petersburg, Elizaveta Lukinichna Kusheleva had already encountered socialist ideas thanks to her exposure to Nikolai Chernyshevksy’s novel What is to Be Done? (1863). Though born into a family of significant wealth, growing up she occupied a liminal social space because of the disparity in her parents ranking: a Russian aristocrat and a German nurse.

Nevertheless, a marriage blanc to retired colonel Mikhail Tomanovskii in 1867 saw her able to travel freely outside of Russia.

She chose Geneva to continue her studies. There, she was amongst the founders of the Russian émigré section of the International, as well as utilising what remained of her sizeable inheritance to fund their newspaper, Narodnoe delo, ‘The Cause of the People’.

In 1870, the Russian émigré section of the International sent her as an envoy to London. It was there she would meet and befriend Karl Marx. Their relationship was one defined by productive intellectual interactions, with Dmitrieff relaying to Marx her realities of economic and social formation in the communes of Russia.

After just three months in London, she was deployed again as an envoy of the International to Paris, this time on behalf of Marx. Arriving in late March, just as the Paris Commune had been proclaimed, she chose Dmitrieff as her nom-de-guerre in the hope that it would help her evade authorities.

Standing 1.66m tall, dressed with a certain elegance and a particular penchant for wearing black, Dmitrieff, aged just 20, would go on to be one of the most important figures of the insurrection. 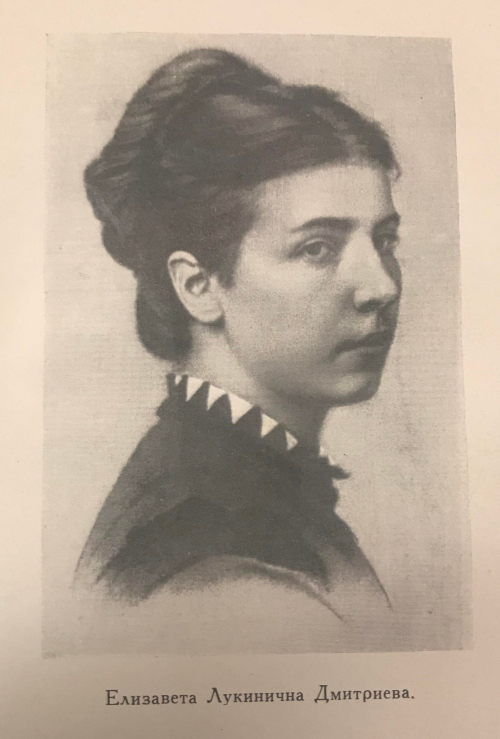 In the weeks following her arrival, an ‘Appeal to the Women Citizens of Paris’ was published onto the streets of Paris, which alongside calls for revolutionary justice, appealed to women to join the newly formed Union des Femmes, set up by Dmitrieff and Nathalie Lemel. Though its immediate interest was finding work for women, the Union also pursued the task of economically and socially redefining traditional notions of women’s work.

Dmitrieff worked frantically through the Commune to the point of illness. This is demonstrated by the aforementioned manifesto, published on May 6th. Towards the end, the document states that:

The women of Paris will prove to France and to the world that they, at the supreme moment of danger – on the barricades, on the ramparts of Paris, and if the reaction forces it, the doors - will give their brothers their blood and their life for the defence and the triumph of the Commune, that is, the People!

Dmitrieff was no mere propagandist. She was injured on the barricades through the conflict in the last week of May which saw as many as 20,000 communards die. After a period of hiding in the home of a friend, Dmitrieff managed to evade capture and flee to Geneva, before returning to Russia.

After the death of her ‘husband’ in 1873, she married again, this time for love, to Ivan Mikhailovich Davydovskii. Together they had two children, before moving the family to Siberia following the exile of her husband – who had been implicated in an attempt by the so-called 'Jack of Hearts Club' to defraud a man of 20 thousand rubles by getting the victim drunk. Fascinatingly, the couple opened a pastry shop, hoping to cater to the political prisoners sent to Siberia. The venture would prove to be unsuccessful.

By 1902, Dmitrieff had left Davydovskii and returned to Moscow. It is here she and her daughters somewhat fall off the historical record. There is no clarity on the date of her death: estimates identify either 1910 or 1918 as likely dates.

As a figure of historical study, she was largely overlooked until Soviet histories emerging through the 1930s. Nevertheless, the Library holds several books across several languages which demonstrate her importance to both the Commune and its historians.

Two French biographies, the first by Yvonne Signer-Lecocq, Rouge Élisabeth, and a second by Sylvie Braibant, Elisabeth Dmitrieff, aristocrate et pétroleuse, both take Dmitrieff as their centrepiece, offering sharp insights into her first experiences of Paris: a city she had never visited before her arrival in late March, 1871.

Another book worth consulting is Surmounting the Barricades: Women in the Paris Commune by Carolyn Eichner. The book takes three communardes as its subject: André Leo, Paule Mink and Dmitrieff, while referring to many others, to demonstrate the plurality of feminist-socialist interventions through the Commune. Eichner has written extensively on the subject, including a recent article on Louise Michel and the transportation of communards to New Caledonia and their eventual conflict with the indigenous Kanak community. 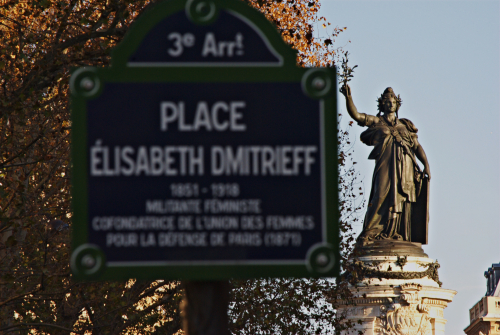 Now recognised by Paris in the form of a small square in the city’s third arrondissement, Dmitrieff’s involvement cannot be underestimated. Her practical applications of highly-centralised socialism, emanating from her experiences in Russia and Geneva, as well as her interactions with the works of Chernyshevksy and Marx, means that Dmitrieff’s star still shines over the Commune.

Posted by European Studies at 9:59 AM