‘The Unknown Feminist of Fin-de-siècle Europe: Lesia Ukrainka’ at the British Library

On 16 November 2021, the British Library, in partnership with the Ukrainian Institute London, hosted an event to celebrate the 150th anniversary of the Ukrainian writer and poet Lesia Ukrainka. The expert panel was chaired by Lucy Delap, Professor of History at the University of Cambridge and a Fellow of Murray Edwards College, and included Sasha Dovzhyk, a Ukrainian scholar and writer based in London, and Oksana Zabuzhko, one of Ukraine’s major contemporary writers. 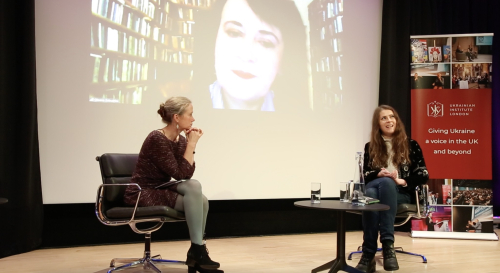 The evening was opened by Katie McElvanney, Curator of Slavonic and East European Collections at the British Library. Oksana Zabuzhko, who joined the event remotely from Kyiv, highlighted that the complete collection of Lesia Ukrainka’s works (14 volumes) had only now been published, 150 years after her birth. She noted that Ukrainka was ‘misread’ in Soviet times and stressed the importance of re-reading and reviving her work and legacy.

Speaking about Ukrainka’s family, Zabuzhko emphasised that they were remarkable people who played an important role in the creation of modern Ukraine. She also spoke about the main themes and motifs of Ukrainka’s 21 plays, which were based on European culture and the European Christian tradition. In each of her dramas the main character is a woman and these women possess spiritual leadership, said Zabuzhko.

As part of the event, Olesya Khromeychuk, Director of the Ukrainian Institute London, announced the winner of the Institute’s inaugural Ukrainian Literature in Translation Prize. The condition of this year was the translation of Ukrainka’s works. First prize was awarded to Nina Murray for her translation from Ukrainka’s drama Cassandra. Daisy Gibbons received the second prize for her translation of extracts from Ukrainka’s letters to Olha Kobylianska and the short story ‘By the Sea’. Nina Murray, together with Uilleam Blacker, then read excerpts from Cassandra in Ukrainian and English. It should be mentioned that Zabuzhko’s novel The Museum of Abandoned Secrets was also translated into English by Nina Murray.

Continuing the panel discussion, Sasha Dovzhyk told the audience about the Ukrainian Institute London’s short film Fin de Siècle Ukrainian Feminism on Ukrainka, where she was an expert. She also spoke about Ukrainka’s letters to Olha Kobylianska. Among the subjects of their correspondence was the struggle for women's rights. Dovzhyk cited and conextualised the words of another outstanding Ukrainian poet and writer Ivan Franko who remarked of Ukrainka, ‘this fragile and sick woman is almost the only man in the whole of Ukraine’.

Oksana Zabuzhko and Sasha Dovzhyk answered a number of questions from the audience. They also stressed that 19th and early 20th-century European literature is not complete without Lesia Ukrainka. She was a part of European culture, even in her travelling, and it is vital that her work is translated into different languages. Discussing Ukrainka’s relevance and appeal in contemporary Ukrainian society, Dovzhyk noted that she has become part of mass culture in Ukraine; during the Euromaidan her image appeared on the building of the Institute of Literature of the National Academy of Sciences, along with the other prominent figures Taras Shevchenko and Ivan Franko. 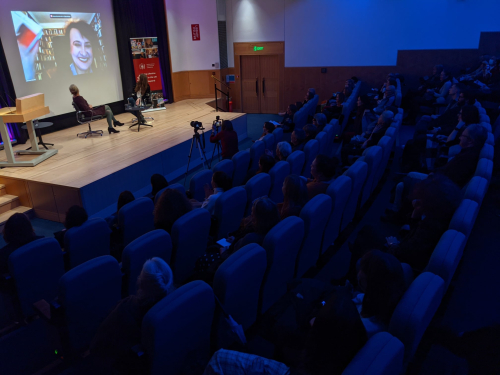 The recording of the event will be available on the Ukrainian Institute London’s YouTube channel.

Photos by Anna Morgan and Tetiana Kharchenko. With thanks to the Ukrainian Institute London for allowing us to reproduce the photos in this blog post.

Posted by European Studies at 9:35 AM