It’s the festive season again! Conversations in our multi-national department invariably turn to colleagues’ national Christmas and New Year traditions, especially what we have to eat in our home countries. In today’s post we learn about a Dutch New Year’s Eve staple

I always struggle to come up with a specific Dutch dish for Christmas. Many people in the Netherlands now have turkey, others have pork meat rolled into a big kind of sausage, often with stuffing. I remember Christmas dinners involving fondue or gourmet with a game of Monopoly on the go.

However, it is a different matter when it comes to New Year’s Eve! Then the whole country turns to baking Oliebollen en Appelbeignets (oil fritters and apple fritters) – buckets full of them.

And if people can’t, or won’t, bake these lovely fruity treats they buy them. From early December oil fritter vans spring up everywhere, like mushrooms in an autumn forest. 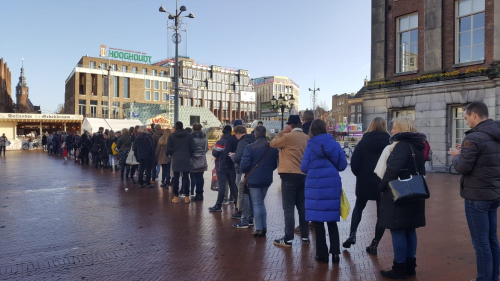 A long queue forms in front of an oil fritter stall at the Grote Markt in Groningen. Photograph by Irene Kingma.

Although the focus of this piece is on oil fritters, I do want to mention the apple fritters, because they too are indispensable on New Year’s Eve. Made of a tart apple, cored and cut into thick slices sprinkled with sugar and cinnamon, they are dipped in a thick pancake batter and deep fried in oil. Drain them on some kitchen paper and dust with icing sugar to serve. They are a refreshing change from the often somewhat rich oil fritters and go very well with a glass of bubbly. 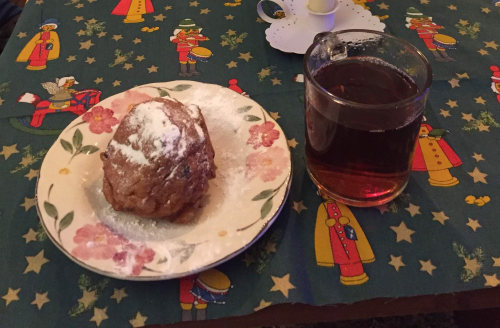 In Flanders the tradition of oil fritters is also kept, although recipes differ slightly. Using smout, a type of lard from pig kidneys, they call their oil fritters Smoutebollen. Another theory has it that smout means rapeseed oil, which to me makes more sense, because that was the oil used in the 17th century in the Northern Netherlands.

The Dutch version of oil fritters will usually include raisins, dried blackcurrants, candied orange or lemon peel and tart apple. The Flemish version will have no dried fruit, but will always contain beer. Many Dutch also add beer to the batter, to make it rise better.

In many households it will be the men who, whilst usually quite happy to leave the cooking to the women any other day of the year, don aprons and wield wooden spoons whilst marching off to the kitchen, or the garden shed where they will bake oil fritters all day long.

In my family it was my mother who baked the traditional New Year’s Eve treats. She beat the flour, dried fruits and milk with yeast into a fluffy smooth batter by hand, which was hard work. Once the batter had risen properly she’d boil sunflower oil in a special deep-frying pan and then take two metal spoons and scoop bits of batter into the oil. The fritters would flip over by themselves, indicating the batter was airy, so the fritters would taste light.

Whilst she was baking away we played outside, gliding over a stretch of snow until it was compacted and smooth and very, very slippery. That kept us busy until well after dark. Back indoors we had a mug of hot chocolate or tea with a warm oliebol, smothered in icing sugar.

The tradition of eating oliebollen is thought to have originated in Spain and Portugal where it was part of a Jewish tradition to eat a similar sweet cake at New Year. When the Sephardic Jews fled the Inquisition many made their way to the Dutch Republic, bringing these oil fritters with them. Before their arrival there is no record of the word referring to oil fritter.

A painting by Albert Cuyp from around 1652 (now in the Dordrechts Museum, image below from Wikimedia Commons) shows a kitchen maid holding a bowl of oil fritters. 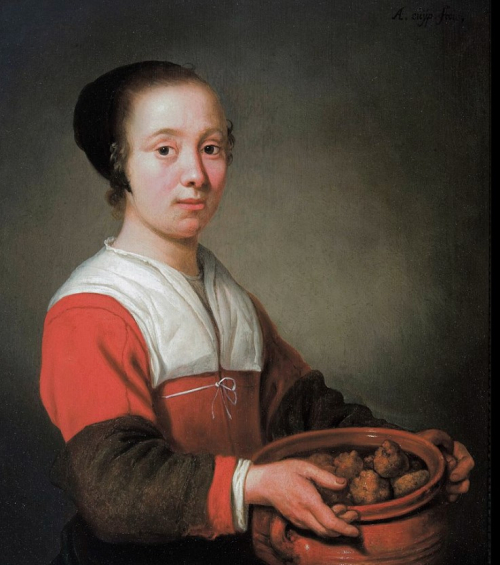 A famous Dutch cookery book De Volmaakte Hollandsche Keuken-Meid (‘The Perfect Dutch Kitchen Maid’), first published in 1746, with many editions until about 1772, contains a recipe for ‘Oly-koeken’ in its Appendix. The STCN does not mention a year for this Appendix, but states ‘third quarter of the 18th Century’. 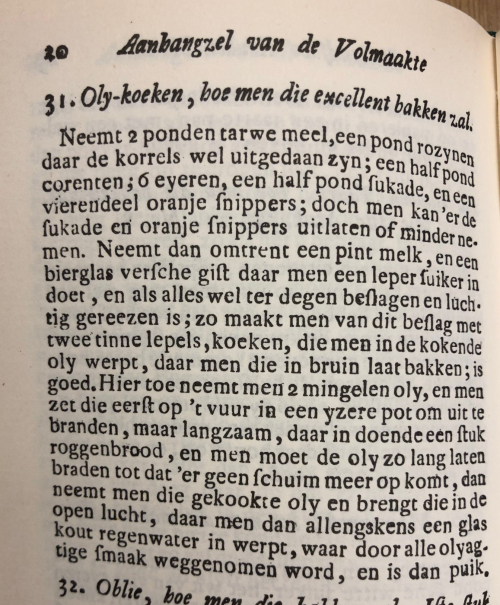 The recipe hasn’t changed much, because the most famous modern Dutch cook book, by C.J. Wannee, lecturer at the Amsterdam School for Housekeeping, has an almost exact recipe, albeit with fewer eggs. 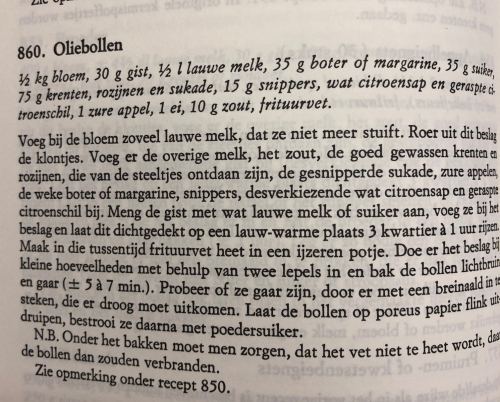 Researching this post I came across several titles of Dutch cookbooks with the shelf mark having a ‘D’ in front. That means that it was one of the victims of the bombing of the British Museum during the Second World War. Some 17th-century Dutch cookbook titles were amongst them, sadly.

Setting ‘good intentions’ for the new year is another long standing tradition. My first ‘good intention’ for 2022 will be to look for replacement copies for the destroyed titles.