I am sure that every bibliophile can recall the feeling of excitement that accompanies us when we take a new book into our hands. The sensation of moving fingers along the surface of the cover, flipping through pages, the distinctive scent of a new book. However, what is even more rewarding and satisfying, is to find a book that has lived well and aged beautifully bathed in genuine interest and love received from its readers.

There are many special books in the British Library collections. However, for me there is one which evokes the very feeling of joy I felt as a child visiting a bookshop or a library. It is Vaclav Havel’s Pokouseni (‘Temptation’). Havel, Czech writer, dissident and former president, who passed away ten years ago this month, wrote this play inspired by the story of Dr Faust. 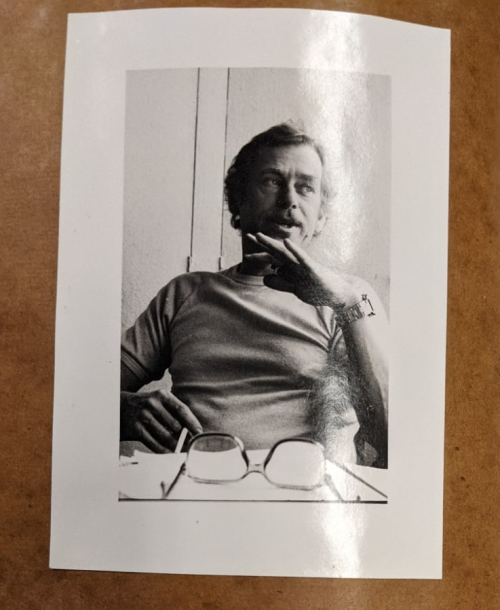 His intellectual interest in the tale was ignited by Goethe’s and Thomas Mann’s literary adaptations that he read while being imprisoned. This prompted him to consider philosophical questions on the relativity of truth and how it can be transformed into a lie. Olga Tokarczuk once said that to write a book she needs to get obsessed with the story first. It was definitely the case with Vaclav Havel and Pokouseni. In published letters written from prison to his wife Olga, Havel explains: ‘As you know, I’m a man obsessions, and I hate giving anything up before I’ve exhausted all (my) possibilities. And so, in fact – though at a distance – I remain with the theatre.’ 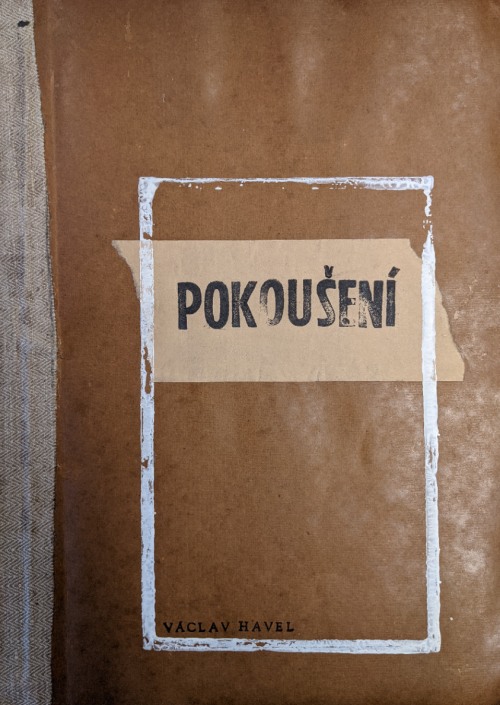 Eda Kriseova in her authorised biography of the Czech writer describes the creative process that lead to the birth of Temptation. It took Havel ten nights to finish the work. He was physically and mentally exhausted and ended up falling down the stairs and hurting his head. He was staying in his country house in Hradecko at the time. Feverish, hurt, trembling the playwright was cut from the world by a sudden snow storm without any food and no way out. Once Havel came back to the world he felt like he had got away from the devil himself. This strenuous yet cathartic creation process resulted in a play that many found disturbing. Presenting the clash of a metaphysical view of the world with a rational one – inflated to surreal and absurd – the play reflected a contemporary Czechoslovakian existence. 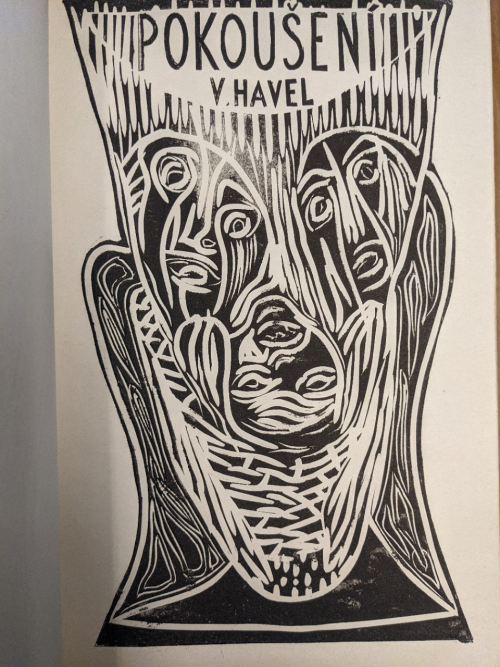 Havel wrote Pokouseni in 1985, after he had been released from prison. He was imprisoned three times for a total of almost five years under the communist regime. Following his incarceration, Havel became an even more internationally recognisable public figure. His works, banned in Czechoslovakia, were smuggled out of the country to be read around the world. Pokouseni was promptly translated to German and premiered in Vienna in 1986. 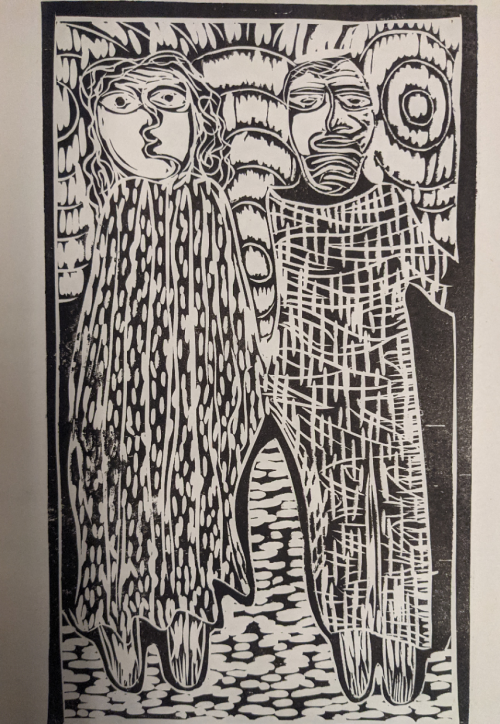 It is actually fitting that the literary work whose conception took such a toll on Havel’s body and mind was published as samizdat. The physicality of the copy we are lucky to have almost mirrors the process the writer went through to create it. It is not the clinical, perfectly cut and immaculately bound product of a mass manufacturer, but rather a raw body of paper turned with love and care into an artefact testifying to the tender effort of a craftsman. Every little detail adds to the story. Were it not for it, the book would look like a plain, boring file folder. Original and unique tape binding has the author’s name typed directly into the fabric before it was closed. What makes this edition exceptional is a collage on the cover and hand-printed linocut illustrations by another Czech dissident Viktor Karlik. Both the artist and the writer were a part of a close-knit circle of friends forming anti-regime opposition in Czechoslovakia. Although Karlik later fell out with Havel over his engagement in politics, his illustrations to Poukuseni complement and enrich the story. The linocut technique fits perfectly Havel’s imaginary universe achieving it through the otherworldly look, stark lines and abstraction. Rarely in samizdat publications that relied on fast printing can we find such a beautiful companionship of imagery and text – the book is a work of art itself. 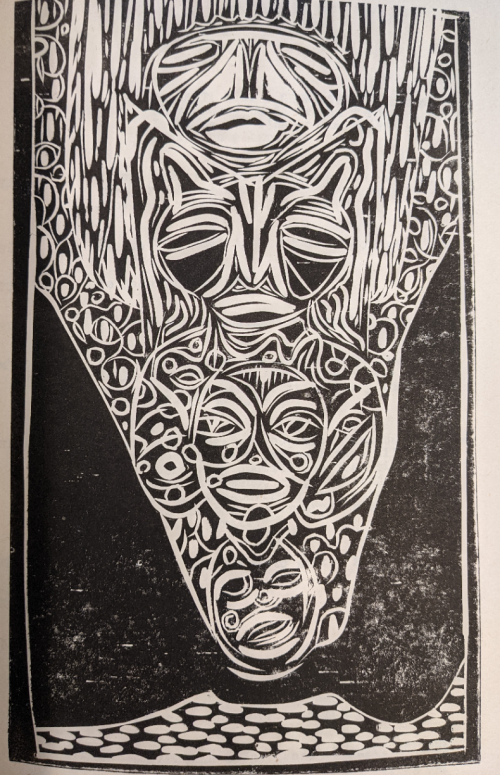 Vaclav Havel’s most prolific years as a writer came before his presidency. Although his political legacy is sometimes contested, he was committed to all the roles he came to play in his life. One may speculate that he was able to achieve this thanks to his very personal understanding of hope, which according to Havel’s conviction is ‘this deep and powerful sense, is not the same as joy that things are going well, or willingness to invest in enterprises that are obviously headed for early success, but rather an ability to work for something because it is good, not just because it stands a chance to succeed’. See the book Disturbing the peace: a conversation with Karel Hvizdala (London, 1990; YC.1991.a.1826)

When I hold the Havel-Karlik copy of Pokouseni in my hand, I am taken back to this place of hope once occupied by those who wanted to change the world by the sheer power of words and art. 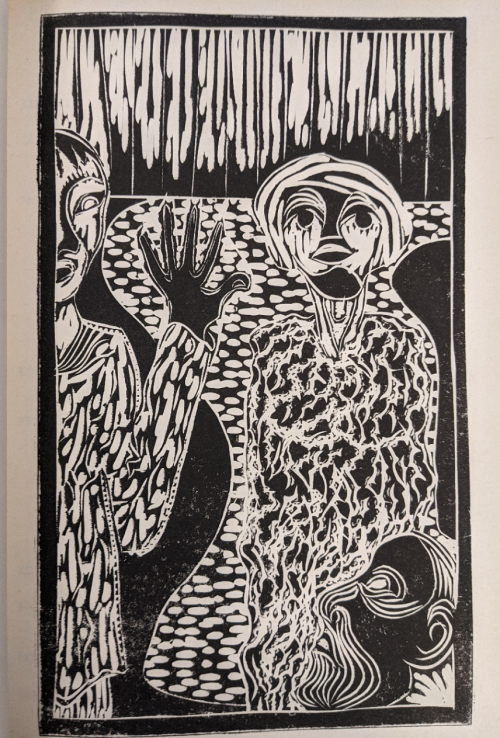