The Bayreuth Festival was founded by the composer Richard Wagner as a showcase for his own works of music drama. However, the first piece of music heard at the inaugural 1876 Festival was not by Wagner himself, but a performance of Beethoven’s 9th Symphony, a piece Wagner had also conducted at a ceremony in 1872 to mark the laying of the foundation stone of his Festival Theatre. Beethoven’s 9th remains the only work not by Wagner himself to have been performed at the Bayreuth Festival. 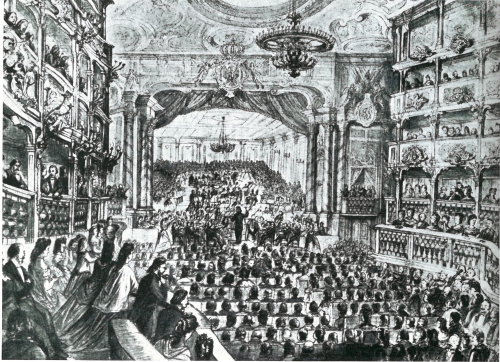 Opening a festival of his own works with a Beethoven symphony was not entirely an act of uncharacteristic modesty on Wagner’s part. He was also positioning himself as Beethoven’s musical and cultural heir and his work as the logical continuation of the synthesis of orchestral and vocal music pioneered in Beethoven’s 9th.

Wagner’s veneration of Beethoven went back at least to his teenage years. Early on during his formal musical studies he made a piano transcription of the 9th Symphony, and in his autobiography Mein Leben (My Life) he claims that the symphony “became the mystical lodestar of all my fantastic musical thoughts and aspirations”.

It was while trying to make his name in Paris between 1839 and 1842 that Wagner expressed his fascination with Beethoven in fictional terms in the novella ‘Ein Pilgerfahrt zu Beethoven’ (‘A Pilgrimage to Beethoven’). This was first published in French translation in the journal Revue et gazette musicale de Paris between 19 November and 3 December 1840 under the rather less hagiographical title ‘Une visite à Beethoven’, and was the first of three stories featuring a composer called ‘R’ from a central German town called ‘L’. 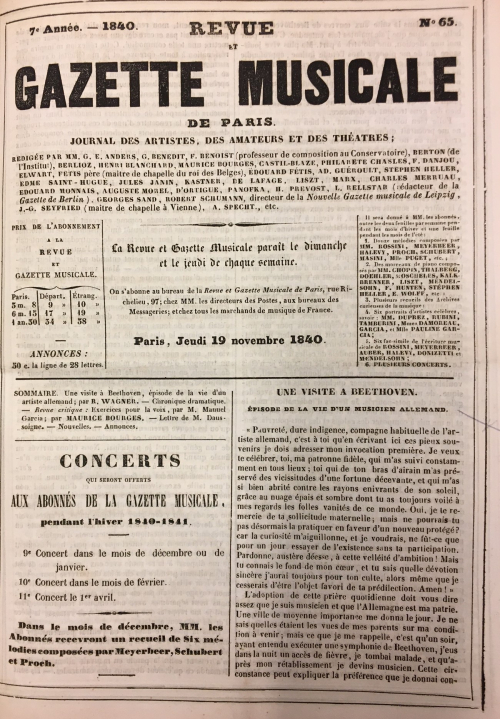 ‘Ein Pilgerfahrt’ begins with R resolving to travel to Vienna to visit his idol, Beethoven. To pay for the trip he is forced to compose popular but lucrative ‘galops and potpourris’, work he finds degrading. Once on his journey he meets a group of travelling musicians who similarly debase themselves by performing trivial crowd-pleasing works to earn money but play Beethoven privately for their own pleasure. R joins them in a rendition of Beethoven’s Septet, but their serene mood is spoilt by an Englishman who stops his carriage to throw them money.

Later R meets the Englishman at an inn and learns that he is a wealthy musical dilettante who is also travelling to visit Beethoven. Although R refuses the Englishman’s offer of a lift, preferring his own ‘holy and devout’ journey on foot, the two men later find themselves in the same hotel in Vienna. To R’s horror, the Englishman decides to use him as a means to gain an interview with the elusive Beethoven, and various farcical episodes ensue. When R finally receives the desired invitation, the Englishman follows him, clinging to his coat-tails in Beethoven’s doorway in order to gain admittance. At last he is ejected, and R is able to enjoy a long and sympathetic private conversation with Beethoven, with particular mention of the 9th symphony which Beethoven is working on. His goal achieved, R leaves Vienna ‘exalted and ennobled’.

Different musicians and composers have been suggested as the inspiration for R, and Wagner apparently drew on the composer Johann Friedrich Reichardt’s account of Vienna, but surely ‘R’ from ‘L’ is primarily a projection of Richard Wagner from Leipzig. Although Wagner never visited Beethoven (he was only 14 when Beethoven died), R shares many of Wagner’s views and the Beethoven of ‘Ein Pilgerfahrt’ expresses opinions on opera and on the importance of the voice in music which are unlikely to have been those of the real Beethoven but were very much those of the real Wagner. Nicholas Vazsonyi has described the story as “a fictionalized Wagner [meeting] an imagined Beethoven”. Wagner here depicts his fictional alter ego as Beethoven’s natural successor who instinctively understands the older man’s true intent, the same connection he would make with the 9th symphony performances at Bayreuth over three decades later.

Both R and the Englishman reappear in Wagner’s second short story, ‘Ein Ende in Paris’ (‘An End in Paris’). Although more directly autobiographical, using episodes from Wagner’s  life as a struggling composer in Paris (including the loss of his beloved Newfoundland dog, abducted in the story by the perfidious Englishman), it is narrated in the third person and ends with R’s death and funeral. His dying speech begins, “I believe in God, Mozart and Beethoven”. The third story ‘Ein glücklicher Abend’ (‘A Happy Evening’) features a conversation between R and the same unnamed narrator where Beethoven is again discussed. The stories were later published in a single volume, prefaced by a short introduction in which the narrator of the second two describes the first as R’s surviving account and the others as his own recollections. 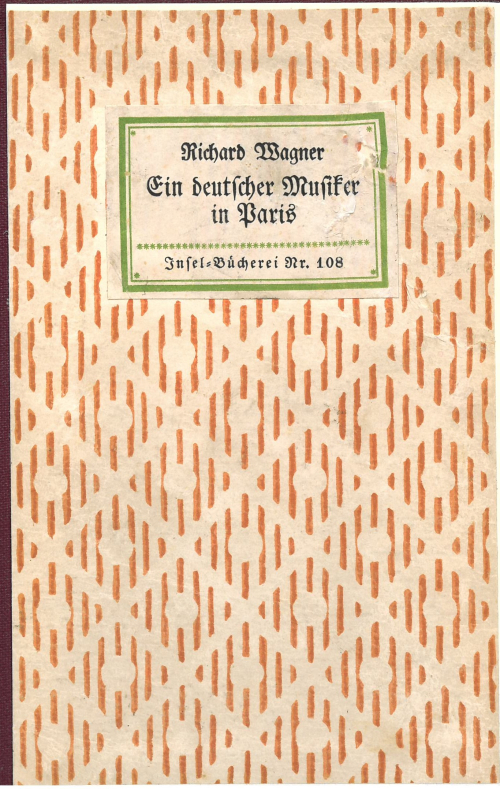 The three Paris stories are unique in Wagner’s large prose output as works of fiction. Although he returned to the subject of Beethoven many times in other prose works, programme notes and a dedicated longer study, he never again expressed his admiration in fictional form and never returned to the short story as a genre.