Many of us would have taken part in the RSPB’s Big Garden Birdwatch, the much-loved annual mass participation birdwatch at the end of January. At the Library, we were delighted to catch a rare sighting ourselves. Colleagues in our Collection Audit team rediscovered a volume of collected booklets of bird illustrations, shelf-marked but hitherto unavailable in the catalogue. Magnus and Wilhelm von Wright’s Svenska foglar (Stockholm, 1828-38; 74/781.k.31) is one of the finest examples of bird illustration in a long history of Scandinavian ornithological literature. 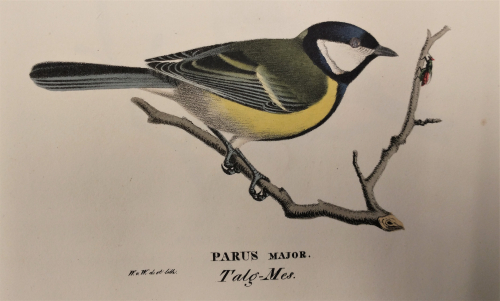 The brothers Magnus, Wilhelm and Ferdinand von Wright were pioneers of Finnish painting, who early on developed a passion for depicting birds on their hunting trips with their father Henrik Magnus von Wright. While Magnus would go on to develop a reputation as a landscape painter as well, the brothers are well known for their work on birdlife in service of both art and science. Having moved to Stockholm to begin his artistic training, Magnus was given the opportunity by Count Nils Bonde, the master of Hörningsholm manor on the island of Mörkö, to illustrate an ambitious work on Swedish birds, Svenska foglar. Efter naturen och på sten ritade af M. och W. von Wright. So overwhelming was the commission, Magnus brought in the help of his brother Wilhelm, and by the end of the project, Ferdinand, who later painted the iconic The Fighting Capercaillies, would also be involved, despite his young age. Svenska foglar became a hugely popular series. Between 1828 and 1838, 30 booklets were published, each containing up to six plates of hand-coloured lithograph birds, with 137 species represented across the 186 birds. In the early 19th century, one of the ways to catch a good enough look at a bird was to shoot it, a skill the von Wright brothers regularly deployed, as well as buying specimens and studying others in the natural science museums in Helsinki, St Petersburg and Stockholm (Lehtola, Lokki and Stjernberg).

Wilhelm would go on to concentrate his artistic efforts on scientific illustration, taking on another commission from Count Bonde to illustrate a guide to butterflies, Svenska fjäriler, before eventually undertaking his greatest achievement, Skandianviens fiskar (Scandinavian Fish), with Bengt Fries, also in the library (BL 727.l.26.).

The brothers made substantial contributions to zoology beyond offering these precise and captivating illustrations. They travelled extensively, making trips to the far North to places such as Tromsø in the Norwegian Arctic and Aavasaksa in Finnish Lapland, where they kept journals and made drawings that furthered ornithological knowledge. They were at the heart of what Björn Dal has called the Swedish ‘Zoological Golden Age’. Of course, the von Wrights, while figuring prominently in Swedish zoology, were Finnish, and Magnus’s unfinished work on his homeland’s avifauna was issued posthumously as Finlands foglar in 1873 (BL Ac.1094.4.). 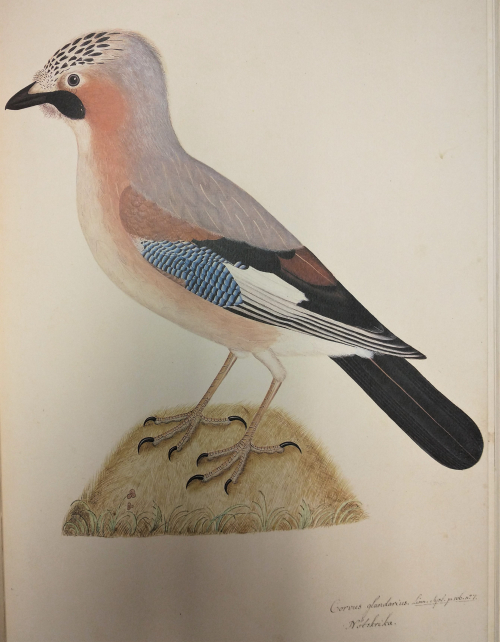 A Eurasian Jay from Olof Rudbeck’s Book of Birds

The brothers entered the ornithological picture when the discipline was burgeoning, a few decades after Linnaeus had pioneered zoological nomenclature and at a time when global exploration proliferated knowledge, interest and possession of the natural world. This handy list of Swedish bird books is comprehensive, locating the first mention of birds in Olaus Magnus’ Historia de gentibus septentrionalibus, the classic work on the history and culture of Scandinavia originally published in Rome in 1555 (152.e.9 and two other copies). Illustrated copiously with woodcuts, it contains plenty of insights into our relationship with birds, including a not-so-faithful image of two men hauling a net full of swallows out of a muddy lake.

The next major contribution we might mention is Olof Rudbeck the Younger’s bird book, a set of astonishing illustrations that some say were unrivalled until the age of Audubon. Rudbeck’s work helped him deliver lectures on ornithology and his images and classifications form the basis of some of the species listed in the tenth edition of Linnaeus’s Systema Naturae (956.e.6.7), the accepted starting point of zoological nomenclature. Rudbeck was Linnaeus’s mentor and patron. The watercolour birds, which were the artistic work of Rudbeck himself, Andreas Holtzbom and potentially others, were accomplished around 1693-1710 but were not published until 1985, with a monumental English edition appearing in 1986 (HS.74/99). The editor’s introduction suggests that had the planned book materialised in its own time, then ‘eighteenth century ornithology, at least as far as Sweden is concerned, would have received an impetus towards unprecedented achievements.’ 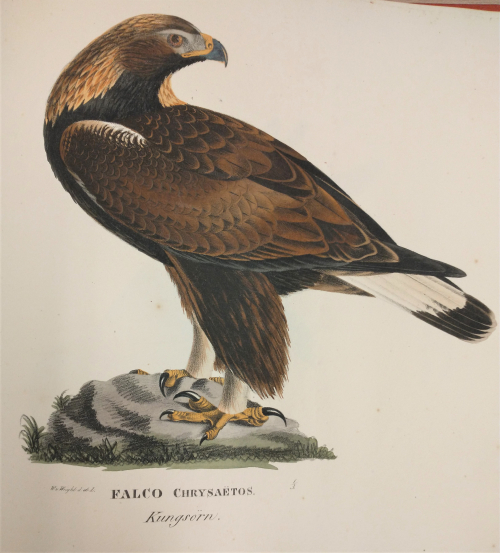 One of Linnaeus’s disciples, Anders Sparrman, would produce the ‘earliest monumental pictorial work on ornithology published in the North’ (Anker), known as the Museum Carlsonianum (Stockholm, 1786-89; 32.g.8), a bird book based on the collection of Johan Gustav von Carlson. It is the first large illustrated work to use the Linnaean naming system and the birds are from around the world, making it of significant scientific interest. Some of these plates, the work of Jonas Carl Linnerhielm, would make it into Sparrman’s subsequent ambitious compilation Svensk Ornitologi (1806), published the same year as another important work, Johan Wilhelm Palmstruch’s Svensk Zoologi (Stockholm, 1806; 454.b.20.).

With vast pictorial works on birds and fauna abounding across Europe and America in the early 19th century, Sweden was no different. Soon the von Wrights’ booklets would appear followed two decades later by Carl Sundevall’s impressive Svenska foglarna (Stockholm, 1856-1886; Cup.1256.aa.18) with illustrations by Peter Åkerlund and Paulina Sjöholm. Sweden’s contribution to zoology and botany in the 18th and 19th centuries is often confined to the (albeit immense) influence of Carl Linnaeus and his disciples. However, through its ornithologist-artists, whose work is distributed in a host of epic illustrated bird books, we get a sense of its wider contribution to our understanding of birds, not least through the plates of the von Wright brothers.

Olof Rudbeck, Olof Rudbeck’s Book of Birds: A Facsimile of the Original Watercolours [c.1693-1710] of Olof Rudbeck the Younger in the Leufsta Collection in Uppsala University Library (Stockholm, 1986)

Jean Anker, Bird Books and Bird Art: An Outline of the Literary history and Iconography of descriptive Ornithology (Copenhagen, 1938), LR.106.a.8

Posted by European Studies at 10:43 AM