The Man who Discovered his Homeland; or, a Polymath without Publications 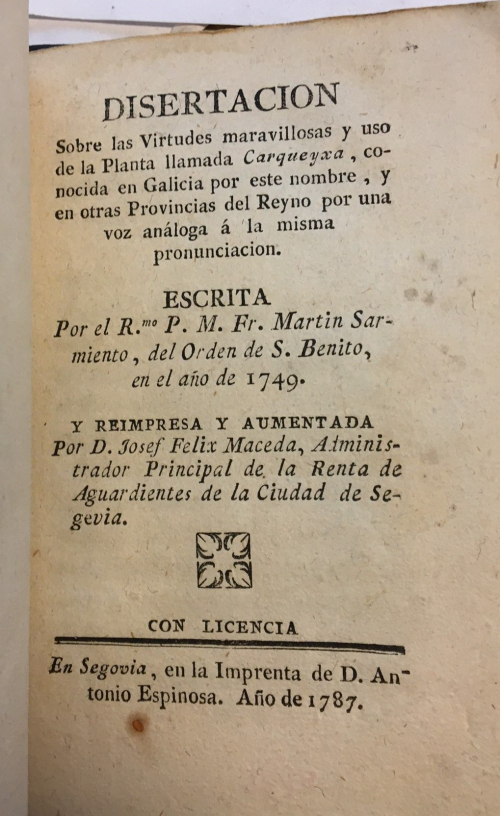 Carqueyxa is in English common broom (genista tridentata), used in folk medicine and modern homeopathy as a medicine. As Sarmiento explains, taken as a syrup it purifies the blood; in a bath it eases rheumatism. He describes cases of patients in the region of Segovia who had read a previous edition of his work (he calls it a pamphlet, pliego) and used broom with success. (One thinks of the ‘unsolicited testimonials’ which purveyors of medicines boasted in the 20th century.) Don Miguel Dovalin (his name suggests he was a Galician) was forbidden chocolate owing to stomach problems. After drinking broom tea, he was able to eat chocolate freely. (I sense a business opportunity). And many more… 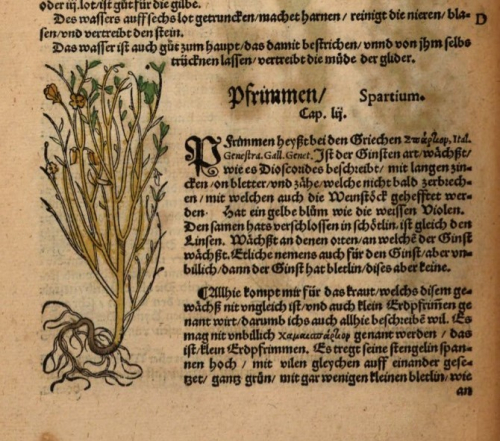 But Sarmiento was no snake-oil merchant: his book is scientific and non-commercial.

Galicia in North-Western Spain was the author’s homeland and it came to loom large in his Weltanschauung. He was actually born in Leon in 1695, as Pedro Joseph García Balboa. Educated in Galicia, in 1710 he moved to Madrid and entered the Benedictine order, where he became a friend of Feijoo: Martin was the patron saint of his monastery and Sarmiento his mother’s family. (I do wonder if the name of ‘vine shoot’ was attractive to him because of his interest in the soil.)

He fulfilled the duties of a man of God which he combined with a life of erudition, discovering manuscripts, botanising and, from 1745 on – already in his fifties --, travelling in his homeland, where he studied its language, archeology and natural history. It was a turning-point: he realised ‘he knew more about China than his own land’. Like other scholars of the time, he published very little in print (his only publication in his lifetime was his defence of Feijoo, the Demostración crítico-apologética del Theatro Crítico Universal) but a lot in manuscript. He counted 10,400 pages of manuscript in 1767. Men of erudition gathered in his cell on Sunday mornings. He wrote reports to government on cultural projects such as a new royal library and the decoration of the royal palace. And the foundation of the Botanical Gardens of Madrid. Like Feijoo he was up to date with the latest European journals. He died in 1772.

Galician now has co-officiality with Castilian in Galicia. The language of the Spanish troubadours (and not just those born in Galicia), in Sarmiento’s time its glory days were well past and it had to wait for the 19th-century Rexurdimento. Sarmiento was an enthusiastic writer on the language and its etymologies (note the -ei- in carqueyxa) but he had no option but to write up his research in Castilian. But in Galician verse he did write one thing, the Coloquio de 24 gallegos rústicos, which he modestly described as an exercise to ‘bring together many Galician words and write them with their true orthography’.

Like the ethnobotanists of today, early botanists learned much of their subject conversing with peasants, and when writing his broom book Sarmiento had the pleasure of combining language and lore.

Posted by European Studies at 12:49 PM