For the past week, the unfolding tragedy in Ukraine has dominated the news. War represents an existential threat not just to human lives, but to the cultural and intellectual heritage that helps us understand who we are – and which it is the mission of library staff to collect, preserve and share.

The British Library’s Chief Librarian is one of the signatories of this statement by the UK Chartered Institute of Library and Information Professionals (CILIP), which expresses solidarity with colleagues across Ukraine, and calls for the UK Government and international community to do all they can to restore peace and security for Ukraine.

In this blog post, we highlight three items from the Library’s Ukrainian collections that speak to the country’s history, people and culture. They present just a snapshot of what the collections have to offer. 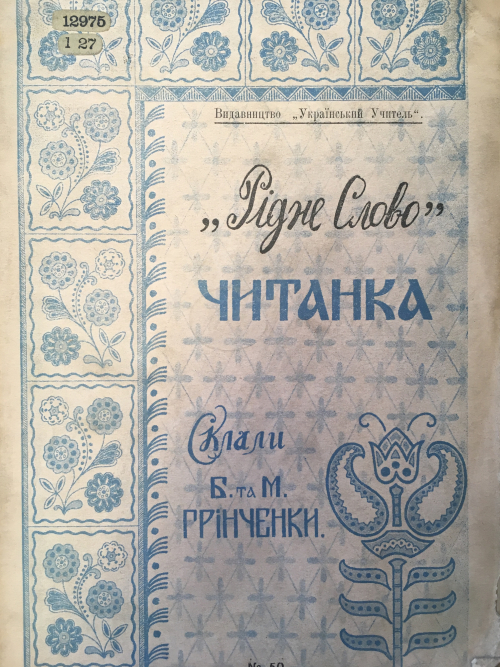 Borys and Mariia Hrinchenko were two of the most prominent Ukrainian educators, folklorists, writers and linguists of the late 19th and early 20th century. They advocated the spread of the Ukrainian language at a time when it was banned from schools and print form by the Ems Ukaz, a secret decree issued in 1876 by the Russian tsar Alexander II aimed at the destruction of Ukrainian language and culture.

Ridne slovo. Ukraïnsʹka chytanka (‘Native Word. A Ukrainian Reader’) was compiled by Borys and Mariia and published in Kyiv in 1912. Borys initially used the reader, which he put together in 1889, to teach his daughter, Anastasiia, how to read. After publishing a Ukrainian primer in 1907 (012901.i.25.(1.)), Borys also planned to publish his reader. The book needed considerable work, however, and he died before it was finished. Following his death from tuberculosis in 1910, Mariia, edited the reader and added additional sections. The book was received as a gift by the British Museum Library in 1913, a year after it was first published.

The reader is arranged thematically, beginning with a section on domestic and wild animals, before moving on to subjects such as flora, clothing and science. In addition to short stories and poems (including by Borys and Mariia Hrinchenko, Lesia Ukrainka and Taras Shevchenko), songs and comprehension exercises, it contains a number of riddles relating to the topic of each section. 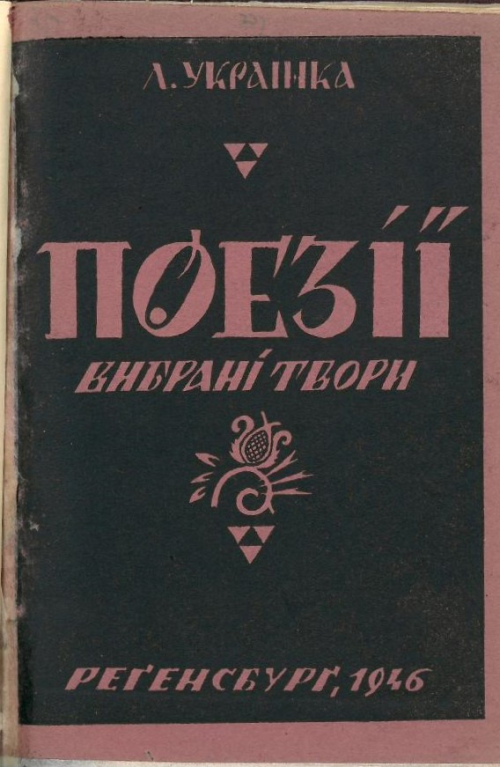 This small volume of poetry by the modernist Ukrainian writer Lesia Ukrainka was published in the Regensburg Displaced Persons (DP) Camp in 1946, the 75th anniversary of her birth. Permitted by authority of the US Military Government in the American Allied Occupation Zone, the British Library copy contains the stamp of the London-based Central Ukrainian Relief Bureau, which is believed to have donated the book to the Library in 1948.

At the end of the Second World War, millions of people, including Ukrainians, were displaced from their homes, with more than six million refugees in Allied-occupied Germany alone. They included concentration camp survivors, political prisoners, former forced labourers and prisoners of war. While many were repatriated in the first few months, approximately one million people in Germany were unable to return to their countries of origin. Ukrainian and other DP communities set up schools, churches, synagogues, theatres, hospitals, and published their own newspapers and books.

The British Library holds a number of rare Ukrainian books, journals and newspapers published in and around DP Camps in Europe (predominantly Germany and Austria) between 1945 and 1955.

You can watch a recording of a 2021 event at the British Library to mark the 150th anniversary of Lesia Ukrainka’s birth on the Ukrainian Institute London’s website. 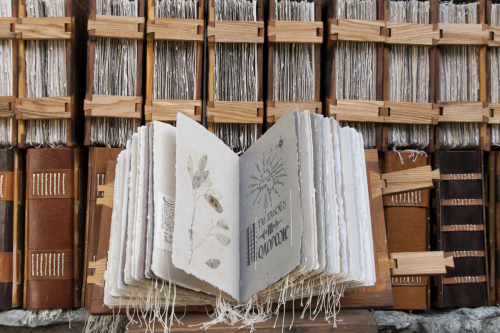 This handmade book celebrates the history and culture of the Hutsuls, an ethnic group from the Hutsul region in the Carpathian Mountains. It is one of a limited series of 35 items, which were donated to major libraries around the world by the Ukrainian Cultural Centre (UKK) in Tallinn, Estonia. One of the most striking and important aspects of the project is its collaboration with Hutsul communities. In addition to the plant specimens, which were collected from the Ukrainian side of the Carpathian Mountains, each book contains postcards and bookmarks from community members with their comments and reflections on aspects of Hutsul life and culture, as well as a cycle of poems in the Hutsul dialect by the poet Mariya Korpanyuk. The postcards were distributed in Hutsul villages and the hundreds of responses, with their stamps and postmarks, were divided among the individual books, further adding to their unique composition and design.

The UKK also partnered with the National Museum of Hutsulshchyna & Pokuttia Folk Art, which selected pre-Second World War photographs of Hutsul life to reproduce and include in the books. Located in Kolomyia, the largest town on traditional Hutsul territory, the museum is dedicated to preserving and promoting Hutsul culture. The photographs are thematically paired to speak to the themes of Korpanyuk’s poems, from childhood and marriage to crafts, music and mushroom picking.

Discover more about the project in this interview with a colleague from the UKK on our blog.

Further information about the collections

From rare 16th-century books and banned texts published in volumes small enough to smuggle across borders, to a futurist literary almanac and digital ephemera from the 2013-14 Euromaidan protests, the Ukrainian collections at the British Library reflect the wealth and strength of Ukrainian culture. Each year we add more than 1,500 items to the collections from all regions of Ukraine and strive to bring them to as wide an audience as possible.

Find out more about the Library’s Ukrainian collections and Ukrainian culture and history by exploring our blog, collection guide, and the Ukrainian Institute London’s website – particularly their series of short films ‘10 Things Everyone Should Know About Ukraine’.

Posted by European Studies at 2:11 PM