As the catastrophic situation in Ukraine unfolds, as human lives and cultural heritage are under threat, the Vernadsky National Library of Ukraine keeps displaying a curt and distressing message: ‘Due to the imposition of martial law throughout Ukraine, the library remains closed to readers’.

The tragic circumstances of one of the most populous countries in Europe remind us of the importance of international solidarity and the need to come together to preserve lives and heritage. In this blog post we take a look at Ukraine in the British Library’s Solidarity collection to show the prominence of international connections for building democracies.

Since 1980, when the Gdańsk Agreement was signed between the strikers of the Lenin Shipyard and the government of the Polish People’s Republic, the Polish ‘Solidarity’ movement – the trade union – has been being widely credited with playing a crucial role in ending communist rule in Poland. For many activists around the world Solidarity became a symbol of a successful battle against tyranny and dictatorship.

The British Library’s collection named after the movement holds thousands of items inspired by the theme of freedom and democracy. A detailed description of the collection can be found on our blog.

The Solidarity Collection, which includes diverse pro-democratic materials from many independent bodies, is a true testament to the freedom movement spreading through the Eastern Bloc in the late 1970s and 1980s. The following collection items highlight the connection between the Polish movement and Ukraine. 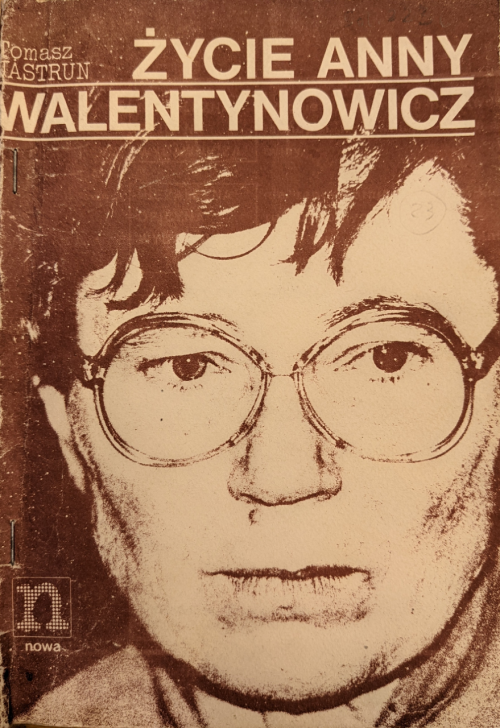 Anna Walentynowicz (née Lubczyk), born in 1929 in Volhynia into a Ukrainian protestant family, was an icon of the Polish solidarity movement. From 1950, when Anna started working for the Gdansk Shipyard, she was actively engaged in defending workers’ rights, protesting against financial fraud, and distributing underground newsletters. In 1978 she joined the Free Trade Unions of the Coast (Wolne Związki Zawodowe Wybrzeża, WZZW), which two years later became an excuse for firing her from her post at the shipyard just before she was due to retire. The act, which infuriated her colleagues, triggered the famed strike on 14 August 1980, and consequentially led to the signing of the Gdańsk Agreement and the birth of the Solidarity trade union. By the mid-1980s Anna’s symbolic position within the ranks of the opposition prompted Tomasz Jastrun, a fellow dissident and literary critic to write her biography, Życie Anny Walentynowicz (The Life of Anna Walentynowicz), in the form of an extended interview. Although Walentynowicz later entered into a conflict with Lech Wałęsa over the direction the Solidarity movement was going, she worked relentlessly her entire life to defend human rights. She said in one of the interviews:

Our main duty is to consider the needs of the others. If we become alive to this duty, there will be no unjustly treated people in our midst, and we, in turn, shall not be treated unjustly. Our day-to-day motto should be: “Your problems are also my problems”. We must extend our friendship and strengthen our solidarity. Source: Extracts from Polish underground publications 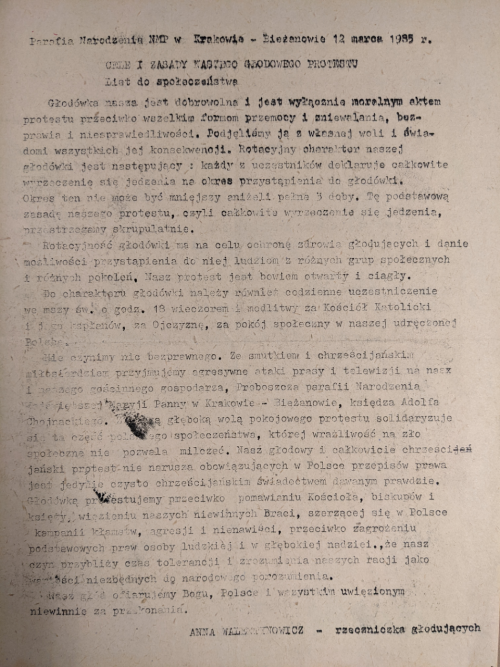 Anna died tragically in the Smolensk air disaster in 2010. Before her death she managed to find and reunite with her family in Ukraine from whom she had been separated during the Second World War. This special issue of the underground periodical Robotnik (Worker) is devoted to the April 1986 atomic disaster in the Chernobyl Nuclear Power Plant in Ukraine, then part of the Soviet Union. The editors of Robotnik express their sympathy and proclaim solidarity with the victims of the catastrophe, which in their view occurred as a result of systematic negligence. They declare: ‘In the Soviet system there is no space for protecting human rights, even the most elementary right to life’. [my translation]

Proclamation on the Rules of Polish-Ukrainian Cooperation 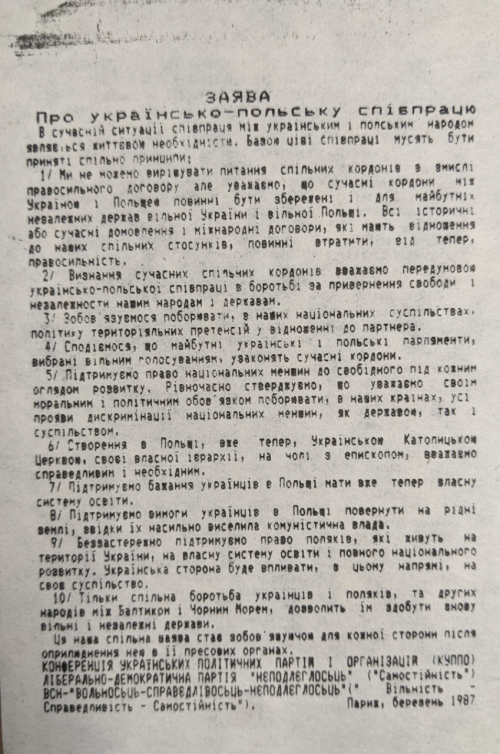 The Liberal Democratic Party ‘Niepodległość’/’Independence’ aimed to overthrow the communist regime and make Poland an independent country. One of their goals was to establish a common position of the Ukrainian and Polish opposition regarding mutual support for the countries’ independence and the future Polish-Ukrainian border. The 1987 ‘Proclamation on the Rules of Polish-Ukrainian Cooperation’, held in the Solidarity collection, shows a joint attempt to reach a solution. The signatories promise to respect each other’s right to national independence. 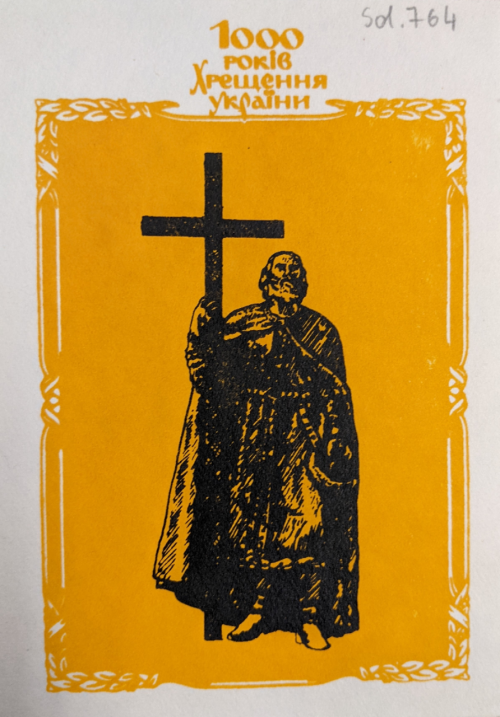 Posted by European Studies at 10:14 AM