In 1913, Filippo Tommaso Marinetti (1876-1944), founder and chief promoter of Italian Futurism, extended the Futurist revolution to the field of typography:

My revolution is aimed at the so-called typographical harmony of the page, which is contrary to the flux and reflux, the leaps and bursts of style that run through the page. On the same page, therefore, we will use three or four colours of ink, or even twenty different typefaces if necessary […]. With this typographical revolution and this multi-coloured variety in the letters I mean to redouble the expressive force of the words, Destruction of Syntax –Imagination without Strings – Words in Freedom (1913).

The so-called ‘Tin Book’ is one of the best examples of the radical rethinking that the Futurists applied to the arts and the book in particular.

The British Library's copy of the Tin Book, digitised as part of the AHRC funded project Interdisciplinary Italy 1900-2020. Interart/Intermedia, was manufactured in Savona in 1932. A selection of word-in-freedom texts by Marinetti are accompanied, on the verso, by a ‘chromatic-poetic’ Futurist synthesis by Tullio d’Albisola (1899-1971), a second generation Futurist whose activities spanned ceramics, poetry, and design. The arrangement has been seen by critics as a potential flaw of the project: we cannot read simultaneously Marinetti’s words-in-freedom and d’Albisola’s visual chromatic-poetic response. Be that as it may, this object-book is no less revolutionary in the way it invites an expanded multi-sensorial reading, signalled by the proper title of the book: Parole in Libertà Futuriste Olfattive Tattili Termiche (‘Futurist Words in Freedom - Olfactory, Tactile, Thermal’). 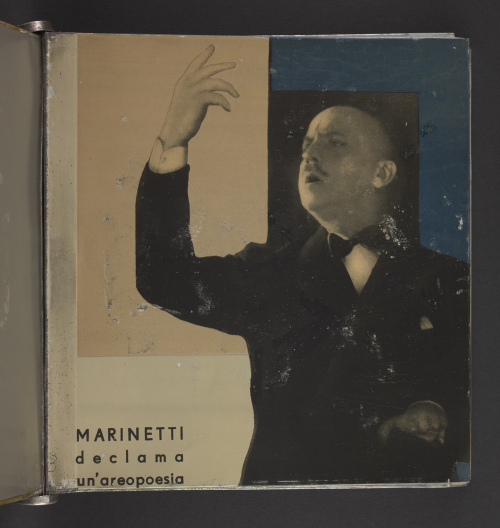 The act of opening the book and turning the pages is first and foremost an acoustic experience. Italian artist and critic Mirella Bentivoglio performed a reading in 1982 at the Pompidou Centre in Paris. The performance piece was called Jouer la page. This is how she describes it: ‘air pressed between the pages at different times and distances from the microphone produced unexpected results. The tin book proved to be a regular instrument furnished with a sounding-box. The cylinder of the spine is an elementary flute through which the pages seem to materialize as sounds’.

The Tin Book took an industrial material and turned it literally into poetry, fusing art and industry. The metallic sound evokes the ‘infinite variety of noises’ of modern life which Luigi Russolo (1885-1947) saw as part of the extraordinary diversity of sound (including music-sound and noise-sound) that would generate the new Art of Noises (The Art of Noises. A Futurist Manifesto, 11 March 1913).

The material and its sonic qualities de-familiarize the reader with the traditional sensorial experience of reading a paper (or digital) book. The association with industrial sounds, turns the book into a machine, and, on a more ordinary level, reminds the reader of the colourful packaging of tin boxes and glossy advertising metal plates that were part of interwar material and visual culture.

The smooth and rough surfaces of the pages have a visual equivalent in shiny and duller areas of the lithographed images, blurring the boundary between text, image, and object. The act of reading the Tin Book pushes meaning to the surface, allowing the reader to experience a multi-sensorial perception in which meaning is not principally held by the words in the book. The process recalls also the principles of the tavole tattili which Marinetti had composed in the later 1910s, especially during the war years. In the 1921 Manifesto of Tactilism, Marinetti introduced the new art of touch—tactilism—which was a means to reconnect with the sense of touch and use it as another important channel of communication and means to experience the world.

The introduction of concrete elements in poetry was a seismic shift in the concept of literature: the fundamental overlapping between word and image (and their connection to sound and touch) opened up new pathways to explore the boundaries between the arts, exposing the artificial separation between arts and media. The Futurist tin books, by playing with the sonic qualities of the book as object, took literature into the realms of sculpture, design and modern technology.

Giuliana Pieri, Professor of Italian and the Visual Arts and Executive Dean (School of Humanities), Royal Holloway University of London

If you are interested in finding out more about this topic, Prof Giuliana Pieri is among the speakers of the upcoming event: Italian Collections in UK Libraries: Past, Present & Future, on Friday 17 June, in person at the British Library. Bookings are open on the BL website.

Posted by European Studies at 11:38 AM