On Sunday 23 August 1931 the front page of Tajny Detektyw (‘Undercover Detective’), a Polish weekly tabloid, featured a photograph of a beautiful woman ominously titled ‘Iga’s Tragedy’. The paper ran a story on a popular Warsaw dancer Iga Korczyńska shot and killed by her former fiancé Zacharjasz Drożyński. The story appealed to masses easily fascinated by classic tropes of love, high-life, obsession, adultery and crime. This was only one of many juicy articles that Tajny Detektyw chose to print that day. 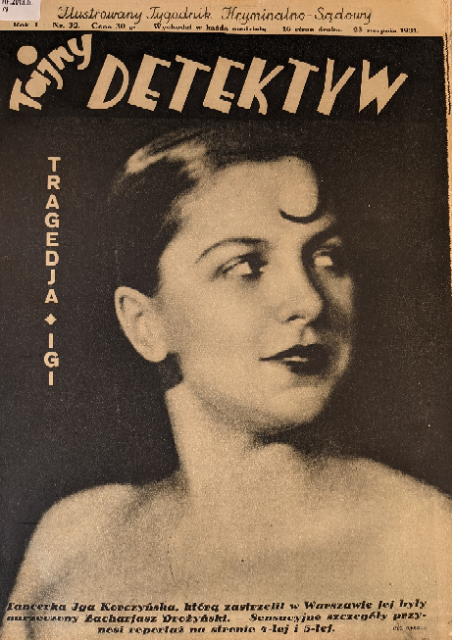 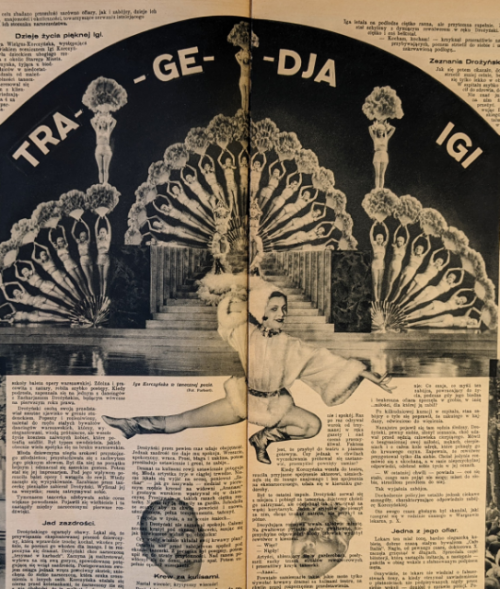 The newspaper was one of the most sensationalist titles in interwar Poland and made quite a name for itself. The weekly newspaper’s circulation of 100,000 used to sell out almost immediately. The title was owned by a Polish entrepreneur and publisher, the biggest and the most influential press magnate of the Second Polish Republic, Marian Dąbrowski.

Tajny Detektyw’s creators had an ambition for the newspaper to become something more than a regular penny paper. The periodical’s intricate graphic design was conceived and executed by Janusz Maria Brzeski a modernist artist, photographer and an avant-garde filmmaker headhunted by Dąbrowski. With determination not to be another ‘penny blood’ Tajny Detektyw’s publishers claimed that the paper’s mission was to ‘fight crime’.

United under this banner the periodical’s journalists did not shy away from any subject. They ventured deep into the realms of social pathology, murder, burglary and rape. They published gruesome stories and were uncompromising in the choice of protagonists that ranged from petty criminals, through corrupt civil servants to crooked judges and police officers. While the featured stories were grisly, their linguistic side had a certain poetic and literary quality to it. However, the newspaper quickly was blacklisted by various organisations, the Catholic Church amongst them. The paper was criticised for doing the exact opposite of what its mission was supposed to be – it was accused of propagating crime and corrupting public morals. 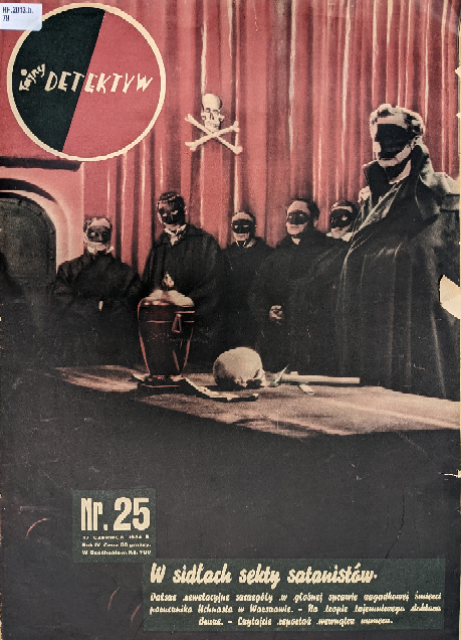 ‘W sidłach sekty satanistów’ – ‘In the Clutches of the Satanic Cult’, gory details of a mysterious death in Warsaw. Front page of Tajny Detektyw, no. 25 (Kraków, 1934) 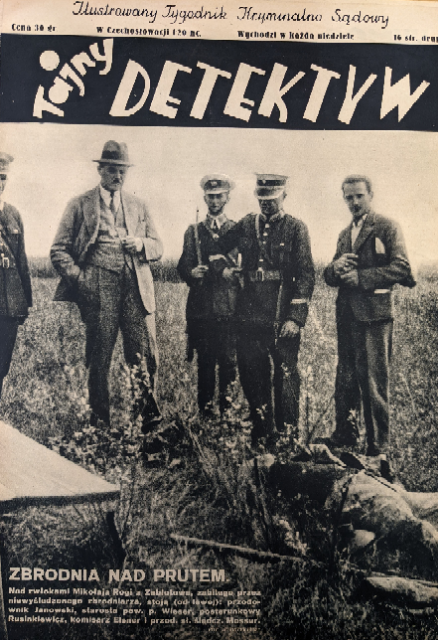 ‘Zbrodnia nad Prutem’ – ‘Crime by the Prut’: members of the local authorities and police officers photographed over the body of a victim of an unknown perpetrator. Back page of Tajny Detektyw, no. 37 (Kraków, 1932) 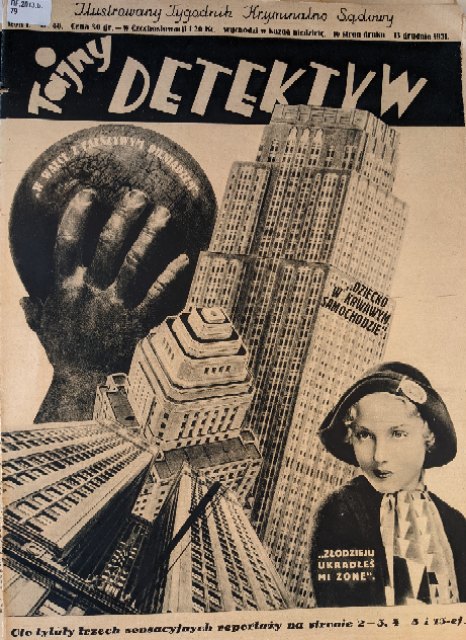 Tajny Detektyw’s graphic designer, Maria Brzeski, favoured collages in his artistic practice. Under his guidance the newspaper produced many exquisite examples of this technique such as this front page of Tajny Detektyw, no. 48 (Kraków, 1931)

It was rumoured that some criminals treated Tajny Detektyw as their training manual. In the end, Dąbrowski was forced to close down the title in 1934. It was a widely-discussed criminal trial of a married couple, Jan and Maria Malisz, that became the final nail in Tajny Detektyw’s coffin. The couple, a painter and his wife, committed a burglary resulting in a double homicide and bodily harm. The scandal and the court proceedings not only exposed the brutal reality of societal poverty in the Polish Second Republic and shed the light on desperation of those struggling for survival, but also became Dąbrowski’s newspaper damnation (see Stanisław Salomonowicz’s book, Pitaval krakowski (Kraków 2010) YF.2014.a.27456 ). Jan and Maria Malisz testified that their deed was inspired by an article in Tajny Detektyw describing a murder of a postman committed in Toruń. The couple thought that they could improve on the already existing scenario. Although, the plan backfired, they instead succeeded in finishing off the most popular criminal chronicle of its time of the social life of the Polish Second Republic. After a turbulent public discussion the newspaper was finally closed down. 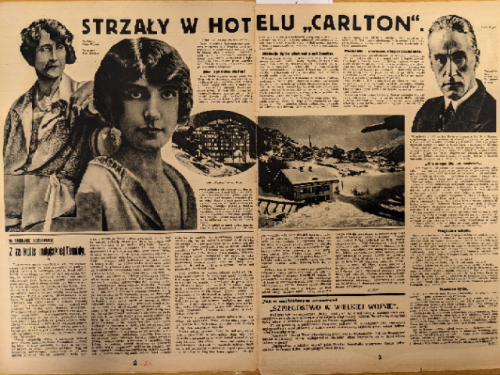 ‘Strzały w Hotelu Carlton’ – ‘Shots at Carlton Hotel’, one of the articles from the newspaper targeted at readers hungry for juicy gossip from abroad. Pages from Tajny Detektyw, no. 30 (Kraków, 1931)

‘Breaking the News’, a current exhibition at the British Library, offers more insight into ways that public opinions and beliefs influence the news and vice versa, including the ways in which scandal and violent crime are depicted. Visit the British Library website to learn more.

Posted by European Studies at 9:10 AM