The Art of Noises

“In antiquity, life was nothing but silence. Noise was really not born before the 19th century, with the advent of machinery. Today noise reigns supreme over human sensibility.” Luigi Russolo 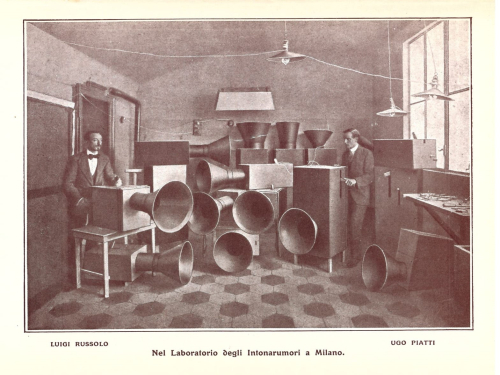 Italian futurists, led by Filippo Tommaso Marinetti, had a huge impact on the avant-garde of the twentieth century and gave popularity to art manifestos. Of the many futurist manifestos, the 11 March 1913 one titled L’arte dei rumori. Manifesto futurista (The Art of Noises. Futurist Manifesto), by Luigi Russolo, had a very long-lasting influence. 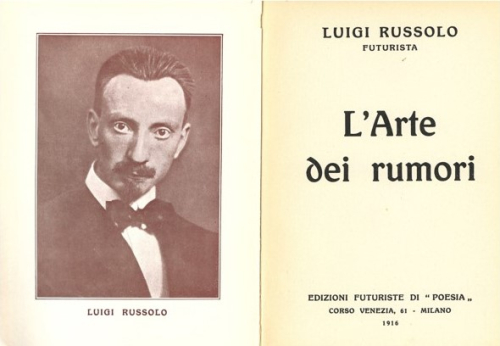 L’arte dei rumori is a manifesto of futurist music. It was subsequently published as a monograph in 1916 in Milan by Edizioni Futuriste di “Poesia”, Marinetti’s own publishing house and official publisher of Italian futurists since 1905. The monograph, also titled L’arte dei rumori, expands on the 1913 manifesto and includes pictures and musical scores.

This book is the first to introduce the notions of noise as sound and sound-art. Noise was a product of the industrial revolution and therefore, for Russolo, futuristic. Onomatopoeic and cacophonic ‘words in freedom’ were already linked to the concept of noise as poetry in the early productions of futurist literature, so noise as sound appears a natural evolution of Marinetti’s Parole in Libertà.

The author of this book, painter turned musician Luigi Russolo, categorizes various types of noises and also created 21 rudimentary experimental noise making machines able to reproduce some noises for the futurist orchestra: intonarumori, including ‘howlers’, ‘bursters’, 'cracklers', ‘hummers’. These Leonardesque magic boxes with levers and trumpets were used for a composition, which reproduces the noise of the urban industrial soundscape: Risveglio di una città (Awakening of a city).

Concerts with intonarumori were organized in 1913 in Modena, and in 1914 in Milan and London, with 10 shows in the Coliseum. Most of Russolo’s instruments were destroyed during WWII and there is only one surviving phonograph recording of the instruments playing together with an orchestra. The full score of Risveglio di una città is also missing, apart from the two pages of notation reproduced below. Nevertheless, attempts to rebuild Russolo’s instruments and reproduce his musical performances happened in the course of the last century. 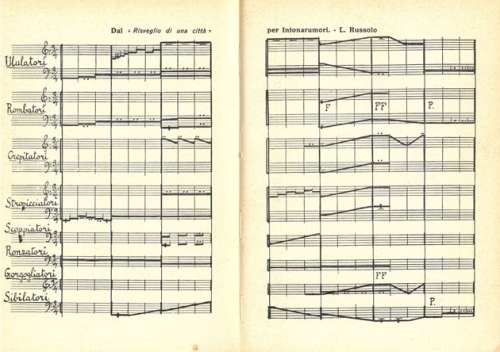 Russolo’s efforts to emancipate noises and to broaden the definition of music were truly revolutionary, but futurist music was not well received by the audience. The public was not ready at the time. However, the use of synthesizers, the invention of noise music, concrete music, soundscape art, sound-art, electroacoustic and electronic music, are all linked to Russolo’s production of writings, music, and instruments. Musicians who were directly influenced by his work include Pierre Schaeffer, Edgard Varèse and John Cage.

Luigi Russolo, The Art of Noise (futurist manifesto, 1913), translated by Robert Filliou, Originally published in 1967 as a Great Bear Pamphlet by Something Else Press, 2004

If you are interested in finding out more about our Italian collections, join us at the upcoming event: Italian Collections in UK Libraries: Past, Present & Future, on Friday 17 June, in person at the British Library. Bookings are open on the BL website.

Posted by European Studies at 9:09 AM