A while ago I was alerted by a colleague to a German item in our collections that appeared to have no catalogue record. It was bound with a list of books censored by the Austrian Empire in the late 18th century, so when I ordered the volume up, I assumed that the uncatalogued item would be something similar, perhaps even a continuation of the previous list.

However, when it arrived, it was obvious that, although only a fragment of a larger work, it was not at all similar, let alone related, to the other work in the volume. It began with a half-title page bearing the title ‘Zusätze, Verbesserungen und Druckfehler’ (‘Additions, improvements and printing errors’), so it was obviously an appendix to a larger work, and from the first two pages of text it was clear that the larger work was a guide to a spa town. 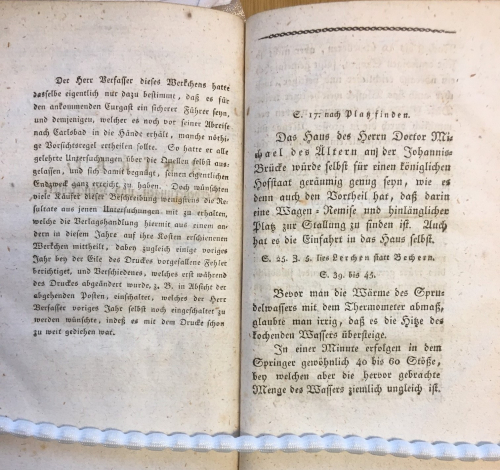 Since the town was not named anywhere in the few pages of text, it might have been impossible to identify the place and therefore the book. However, a long-ago cataloguer had obviously had a better knowledge of spa culture than I did as there was a pencil note reading ‘K Carlsbad’. The letter K was used in the British Museum Library to indicate that an item had been catalogued, and the word after it denoted the heading used for it in the catalogue. So this was presumably a guide to the famous spa at what was then known as Karlsbad (anglicised as Carlsbad), and is today Karlovy Vary in the Czech Republic. From the look of the typeface and the style of writing – and based on the date of the other item in the volume – it seemed likely that it dated from the late 18th or early 19th century. 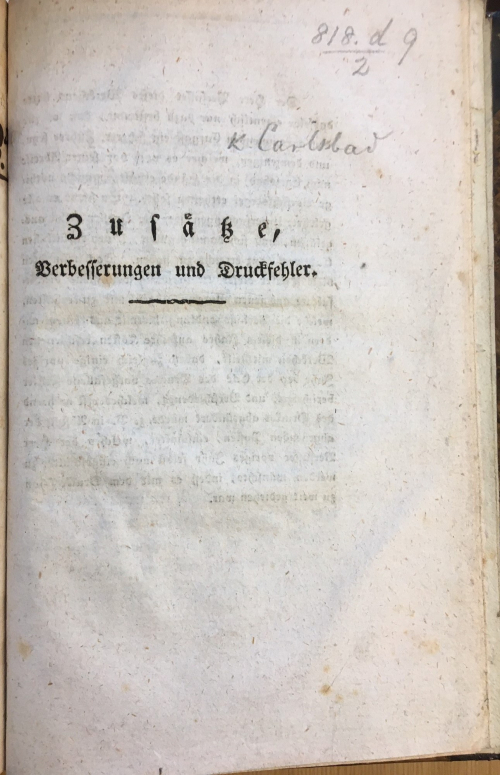 I knew from the pencil note that there had been a catalogue record made for the fragment, so went to the version of the printed catalogue published between 1979 and 1987 (known as BLC) to check it out. Perhaps it had been one of those odd records that had somehow fallen off the radar when the printed records were converted to an online format. But there was no heading in the catalogue for ‘Carlsbad’. There was one for the German spelling ‘Karlsbad’, which was a cross-reference to ‘Karlovy Vary’, but there was nothing there that could conceivably match the item in question.

So I had to go further back in time, to the first general catalogue of the British Museum Library, published in the 1890s and known as GK1. Here there was a heading ‘Carlsbad’ with a number of mainly anonymous works listed, including the item in hand. However, the record didn’t get me much further in identifying the book the fragment came from, describing it simply as ‘a fragment of some work on the mineral waters of Carlsbad’ with a speculative date of 1803. 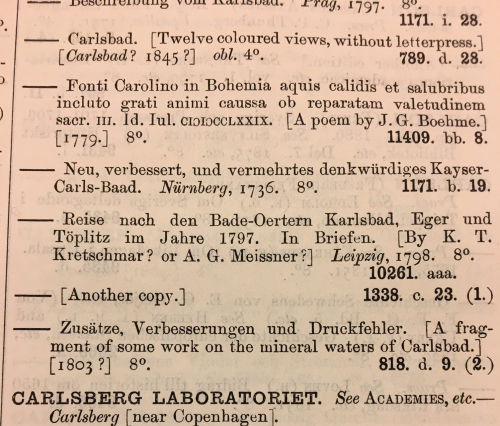 At this point I had two options. I could either create something similar to the GK1 record on our current catalogue, giving approximate details and date, or I could see whether I could find an item that would match our fragment by searching online and create a fuller record. I thought I would try the latter and turned to one of my all-time favourite websites, the Karlsruhe Virtual Catalogue, which can be used to search a wide range of German and other library catalogues. By typing in ‘Carlsbad’ along with other keywords that might conceivably appear in the title of a German travel guide I found various possibilities, and the increasing availability of digitised editions enabled me to check for matches in most cases.

I was on almost my last attempt when I finally found what looked like a match in the collections of the Austrian National Library. Ironically, this copy didn’t have the ‘Zusätze, Verbesserungen und Druckfehler’ to make a direct comparison, but by cross-checking the corrections and additions with the page references from the original given in our fragment I was able to confirm that I had indeed found the right book, and to create a full catalogue record for it with a note explaining that we only hold a small part of the whole. 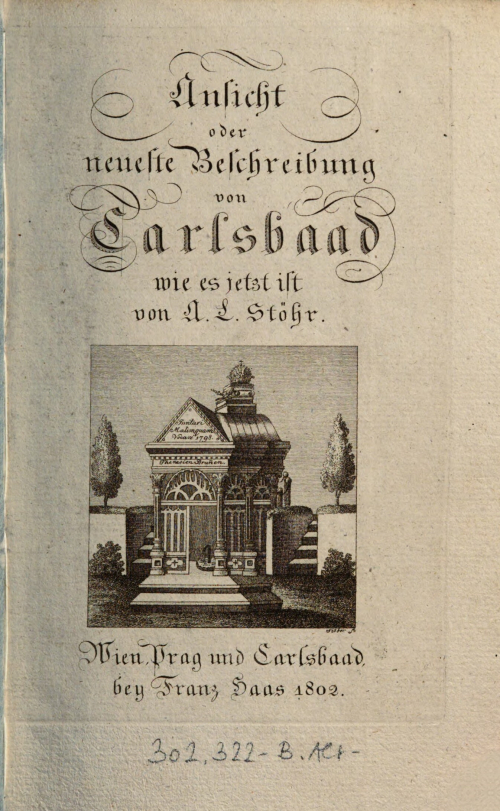 Engraved title-page of the complete work, from a copy in the Austrian National Library

Although I’m rather proud of myself for having solved this little bibliographical mystery, I doubt anyone will ever know why two such different items ended up bound together. But at least the fragment that we have is now identifiable.