On 30 August 2022, Mikhail Gorbachev, the first and the last President of the Soviet Union died at the age of 91 in Moscow. Born in 1931, when the Soviet state was already well established, he was a son of his time and country: he worked hard as a teenager during World War II, cried at Stalin’s funeral and believed in the communist future. 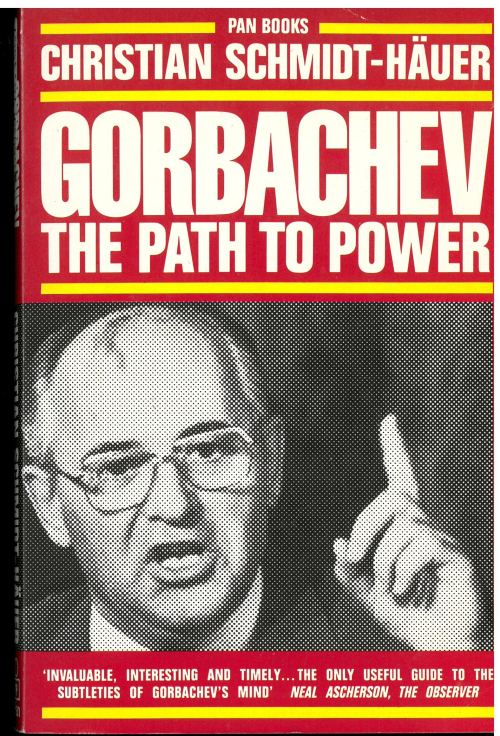 Although he led the country for only six years, the processes that resulted in global changes in the world and transformed the lives of millions of people started when he was in power. A controversial figure, he is remembered for his inconsistent attempts of reforming the miserably failing Soviet planned economy, while holding on to the already non-viable union of soviet republics, liberating political prisoners and dissidents, announcing glasnost and getting rid of censorship. The awful mismanagement of the Chernobyl disaster and signing of the Intermediate-Range Nuclear Forces Treaty, the famous anti-alcohol campaign and liberalisation of the anti-clerical regime, the violent suppression of anti-Soviet and pro-independence demonstrations in Tbilisi and Vilnius, and the demolition of the Berlin Wall all happened on his watch. 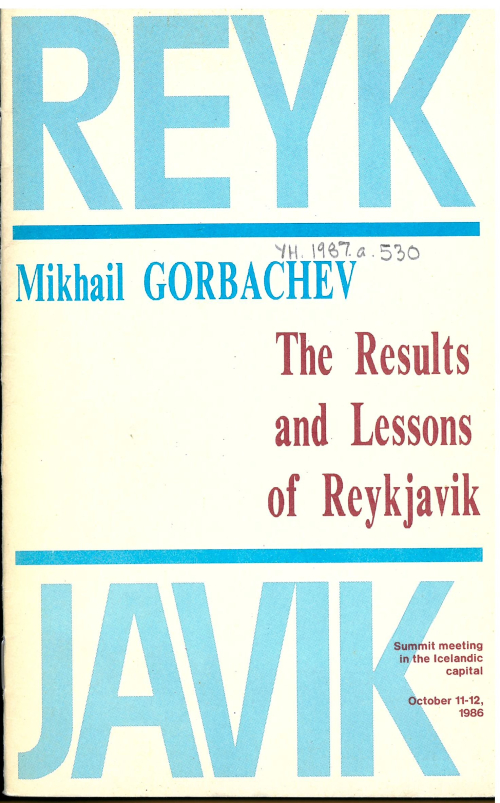 Having ended the Soviet invasion in Afghanistan in 1989, Gorbachev supported Russia’s annexation of Crimea in 2014. He enjoyed a long life as a ‘common citizen’ after leaving office, could demonstrate self-irony, had a happy marriage and was not shy to show love and devotion to his wife – all very uncharacteristic features for Soviet and Russian leaders. However, Gorbachev never publicly admitted any mistakes and wrongdoings or openly criticised his successors, which is typical in Soviet and Russian politics.

The materials the British Library holds on Gorbachev and his time, of course, reflect the entire spectrum of views and opinions. Among the first books published in the West about Gorbachev are those written by a German international affairs correspondent in Moscow, Christian Schmidt-Haüer, (see the image above) and a noted Soviet scientist and dissident, Zhores Medvedev. 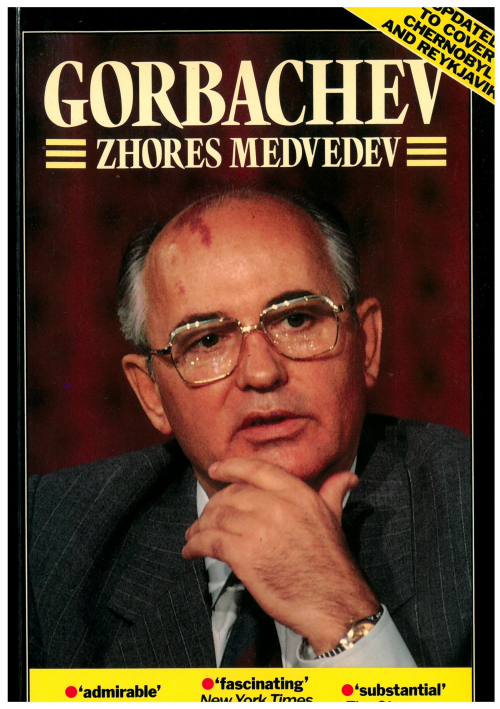 While the West was deciding on an adequate reaction to the new challenges presented by the Soviet leadership, Polish dissidents were warning western politicians not to trust Gorbachev, as they saw his leadership as not a revision of the Soviet oppressive policies, but just a continuation of them. 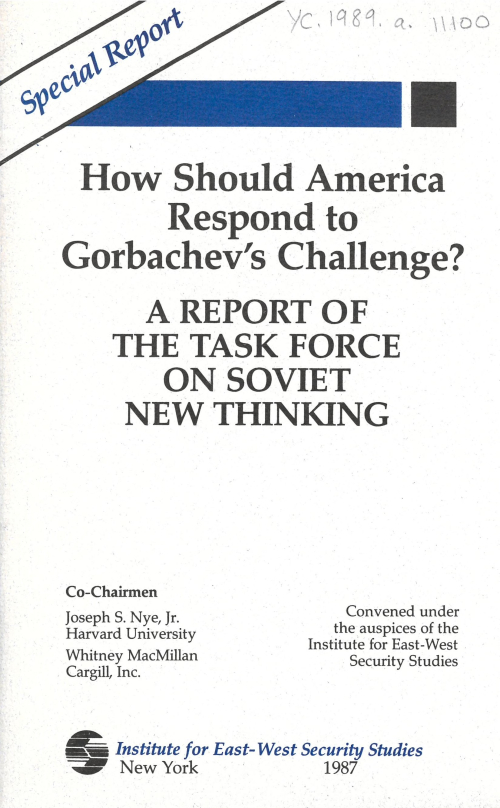 How should America respond to Gorbachev's challenge: a report of the Task Force on Soviet New Thinking. Institute for East-West Security Studies, 1987. YC.1989.a.11100 At the same time, the Association of Belarusians in Great Britain published two letters to Gorbachev written by prominent writers and cultural figures in support of the use and revival of the Belarusian language and against the russification of Belarus. Both letters were openly sent to Gorbachev in the Soviet Union in 1986, but their publication in London was still considered an offence and cost one of the authors his membership in the Communist party. 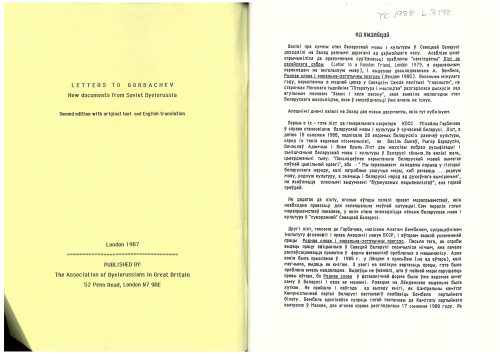 Gorbachev did not attempt to solve this problem, and probably never fully understood it, although he went through a long evolution of political ideas from dogmatic Communism to a social democratic understanding of socialism. A book of conversations with Zdenĕk Mlynář, his good and long-standing friend since their student days at the Moscow State University, shows this evolution. 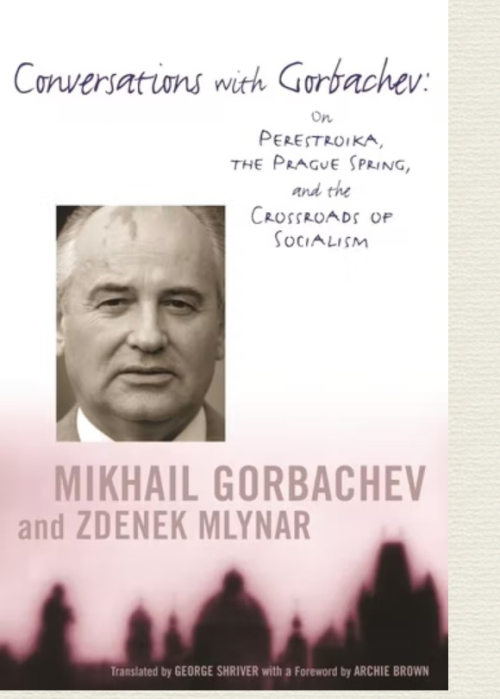 Mikhail Gorbachev, Zdeněk Mlynář (translated by George Shriver). Conversations with Gorbachev: on Perestroika, the Prague Spring and the crossroads of socialism. NY, 2002. YC.2002.a.14470

Zdenĕk Mlynář, an intellectual and politician, whose ideas formulated in the political manifesto Towards a Democratic Political Organisation of Society (1968) laid the foundation of the Prague Spring in 1968, was one of the signatories of Charter 77 and spent over ten years in exile before the Velvet Revolution. In the book, Mlynář and Gorbachev discuss such questions as ‘freedom of choice’, can the use of force ‘save socialism’, what to do with the party and ‘an airplane that took off without knowing where it would land’. As Peter Duncan wrote in his review of the 2002 English edition of the book, “it is symptomatic that no Russian edition has appeared yet”. To the best of my knowledge, the book has still not been translated into Russian.

David Barkin. Gorbachev and the decline of ideology in Soviet foreign policy. London, 2019.

Posted by European Studies at 3:02 PM