The spirit of freedom, or an episode in the life of a private person in the time of transformations

28 October is a National holiday in the Czech Republic. Independence Day (Den vzniku samostatného československého státu) marks the foundation of the independent Czechoslovak State in 1918. It followed the publication of the Declaration of Independence of the Czechoslovak Nation by Its Provisional Government (Prohlášení nezávislosti československého národa zatímní vládou československou) on 18 October 1918. As soon as military defeat became inevitable, the multi-ethnic Austro-Hungarian Empire started to disintegrate. The Allies supported the breakaway demands of the minority nations within the Empire. The 1918 ‘Autumn of Nations’ led to fundamental changes in the configuration of Central Europe.

The main author of the Declaration was the first President of Czechoslovakia, Professor Tomáš Garrigue Masaryk, sociologist, political scientist and philosopher. 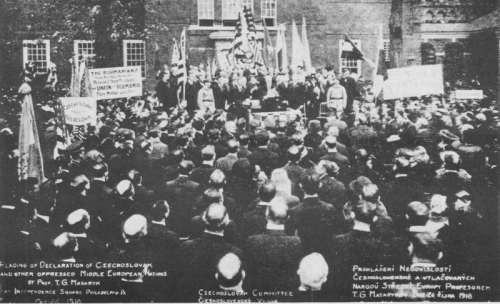 Although the whole process of independence revolutions in Central Europe had the American idea of national self-determination as its theoretical basis, the Czechoslovak Declaration of Independence or the Washington Declaration, as it is sometimes called, is evidently the most influenced by American political principles and President Woodrow Wilson’s 14-point programme for world peace:

We accept and shall adhere to the ideals of modern democracy, as they have been the ideals of our nation for centuries. We accept the American principles as laid down by President Wilson: the principles of liberated mankind, of actual equality of nations, and of the governments deriving all their jus power from the consent of the governed. We, the nation of Comenius, cannot but accept these principles expressed in the American Declaration of Independence, the principles of Lincoln, and of the Declaration of the Rights of Man and the Citizen. (Digital copy)

Although the British Library is not among the lucky few who own one of only 50 copies of the first edition, the 1933 edition with parallel Czech and English texts is a really fine piece of Czech book culture. 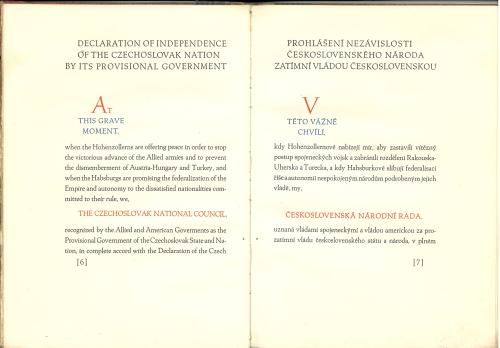 The links between the two nations and the presidents were promoted and emphasised in Czechoslovak society through imagery, such as, for example, this postcard published on the website of the US Embassy in the Czech Republic.

American political thought was of great importance for building a new nation state. Changing the focus from global political transformations to individuals, I tried to imagine a 30-year-old Czech banker and Doctor of Law, who, while on a state mission to London, came to the British Museum Library to work in its Reading Room. His name was Vladimír Dědek (1889-1941) and he is also known as an editor of research volumes on history and a translator from English. It would be good to learn more about his life, but for now I can only offer you his letter to the British Museum written in clear handwriting, where he thanks colleagues for their help and offers a donation: Benjamin Franklin’s autobiography in his translation into Czech. 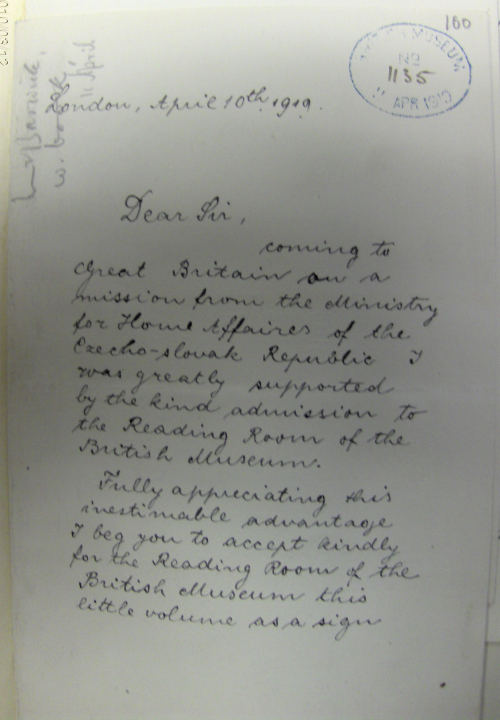 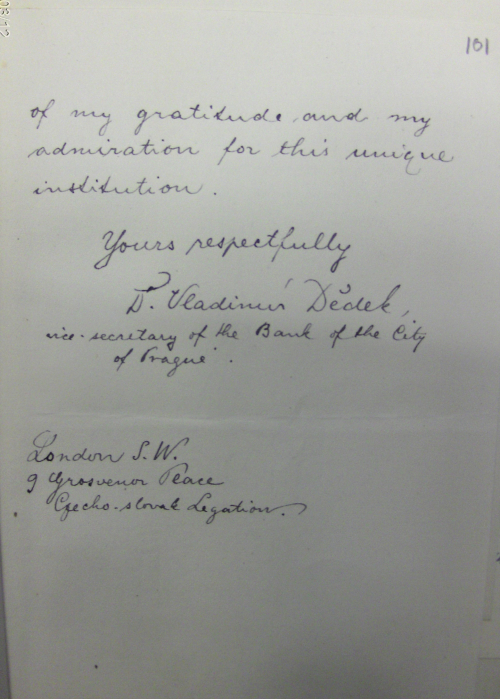 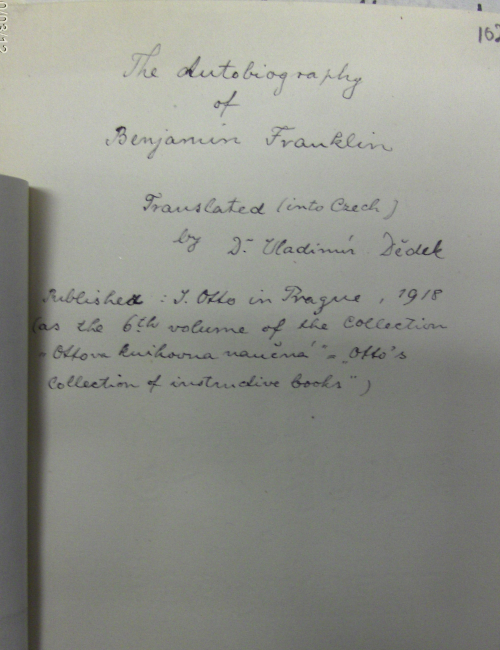 The book, which is signed by Dědek, is held in our main printed books collection (a digital copy is available through the National Digital Library of the Czech Republic). 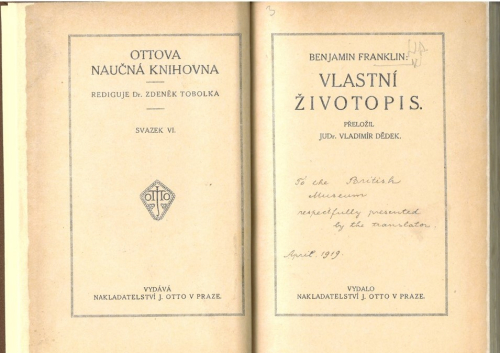 In the preface to the book, having cited Franklin’s words about freedom, Dědek concludes that “the spirit of free America, great in the history of mankind, is blowing from these lines” (p. 24). However, in the words of the father of the nation, Tomáš Masaryk, “freedom is a hard responsibility” (Hovory s T.G. Masarykem. Věk mladosti / K.Č.; ZF.9.a.2782).

Posted by European Studies at 4:22 PM