The British Library is pleased to invite applications from HEI partners to co-supervise the AHRC PhD project ‘Postcolonial Discourse in East European Studies and its Application to British Library Collections’.

Slavonic and Eastern European collections at the British Library are one of its strengths. Developed since the mid‐19th century, the collections are broad and diverse, including a wide range of materials in Slavonic languages and originating in countries referred to as Eastern Europe and Eurasia. However, despite the diversity of the collections, marginalised voices and the complexities of relations between the cultures are not easily visible through the collections’ structures and descriptions. The British Library co‐supervisors have identified postcolonial research and its application to curatorial practices as a priority approach to these collections, likely to reveal many meaningful gaps and contested interpretations. The team of curators are looking to engage with an HEI partner on a project that can be beneficial for the entire collection area and therefore offer an opportunity for wide interpretation of this CDP.

The purpose of this CDP project is first to advance postcolonial and decolonisation work in the above area studies and then to apply this to the British Library’s collections in the form of policy, review and/or recommendations. Focusing on the Belarusian, Polish, Russian and/or Ukrainian collections, the study will therefore provide the foundation for a new understanding of decolonising practices in the context of Eastern Europe, as well as the Library’s policy on collecting, curating and interpreting the collections. 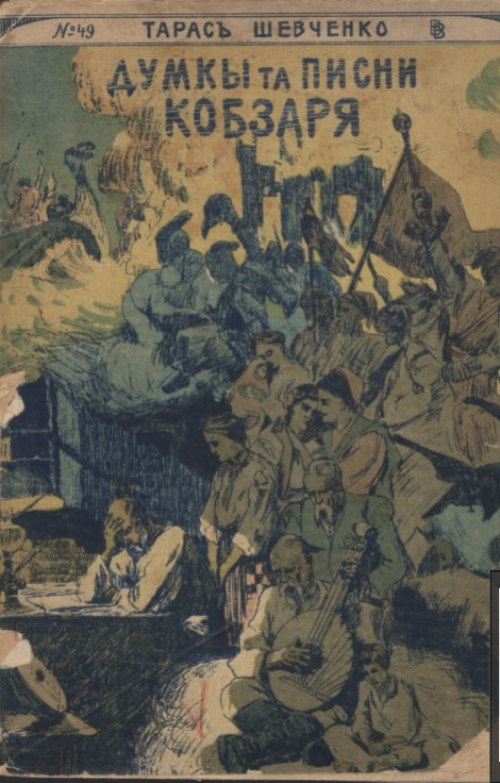 Cover of Taras Shevchenko, Dumky ta pisni Kobzaria (Kyiv, 1905). The book, part of a series, was issued by Kievskaia starina, a monthly magazine for Ukrainian studies. Originally published in Russian, the magazine was renamed Ukraïna in 1907 and appeared in Ukrainian. Here, the title of the book is written in Ukrainian in Russian orthography.

The collections under investigations can be taken holistically using an Area Studies approach; on a country or regional level; thematically (e.g., as a comparative study of colonial and imperial approaches and practices within Eastern Europe); or focus on ethnic, national or transnational groups (e.g., material produced in minority and minoritised languages and communities). The approaches can also vary from concentrating on theoretical issues and building a theoretical framework, creating comparative analysis or conducting case studies. The potential focus and research questions will be refined and developed with the HEI partner and (once recruited) the student.

Research questions can include (but are not limited to) the following:

By examining the collections through a critical, historical lens and identifying points of contestation in interpretation, potential outcomes of the project could include:

The placement provides an opportunity to work on a project that will deliver a practical output by improving discovery and accessibility of one of the largest heritage collections in the world, including for the communities who create and are represented in the collections. It also offers an opportunity to develop cultural diplomacy skills by liaising with organisations with varied governance practices and cultural backgrounds, for example: the Ukrainian Institute London, various Polish cultural organisations (e.g. the Pilsudski Institute), COSEELIS, Pushkin House etc.

Based within the Library's European, Americas and Oceania Collections team, the student will have access to advice and support from across this team, and work closely with a smaller team of East European curators. Depending on the student’s interests and project needs there will be opportunities to learn about other roles and activities within the Library (e.g., metadata, cataloguing teams, events, etc). The student will also have access to the Library’s extensive training programmes.

The deadline for applications is Friday 25 November 2022, 5pm. For more information on the project and how to apply, see the Library website.

Posted by European Studies at 12:08 PM