A few months ago one of the curators of our current exhibition ‘Alexander the Great: the Making of a Myth’ asked me for some information about a book they were thinking of including (but eventually did not). This was a German play of 1941, Alexander, by Hans Baumann, a writer whose career had flourished in the Third Reich, especially through the many songs he wrote for the Nazi youth movements. 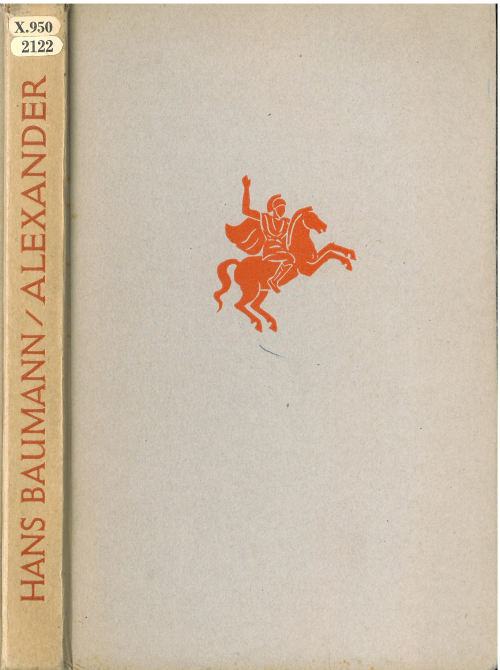 Baumann’s play is set after Alexander’s conquests in India and depicts the conflict between Alexander’s desire to advance further and that of his army to return home. Generals Cleitus and Craterus, sons of Admiral Nearchus, plot with relatives of the former Persian king Darius to encourage mutiny in the army, hoping that this will force Alexander to return to Macedon and place Persia back in the hands of Darius’s family. They initially succeed in rousing the army, but Alexander kills Cleitus to avenge an insult, and Craterus is executed for killing Alexander’s friend Hephaestion. Although the mutiny is crushed, the last scenes hint at Alexander’s own death, and it is left to Nearchus, still loyal to Alexander despite his sons’ deaths, to lead the Macedonian fleet onwards, inspired by Alexander’s example.

The plot plays fast and loose with history: Cleitus and Craterus were neither brothers nor Nearchus’s sons, Hephaestion died some time later and was not murdered by Craterus, who outlived Alexander. Baumann was clearly more concerned with symbolism than history. The play is reminiscent of a ‘Thingspiel’, a form of stylised drama designed for outdoor performance, often using historical events as allegories of the present. Baumann himself had written a Thingspiel, Rüdiger von Bechelaren, in 1939 and elements of the genre, particularly a rather static presentation and the use of choruses, remain in Alexander.

The play was widely praised on publication and won two literary prizes. It caught the attention of the actor Gustaf Gründgens, then Artistic Director of the Berlin State Theatre, who asked Baumann for permission to stage Alexander. The premiere on 19 June 1941, with Gründgens in the title role, was well received, but the play, according to different accounts, ran for only two, six or seven performances. 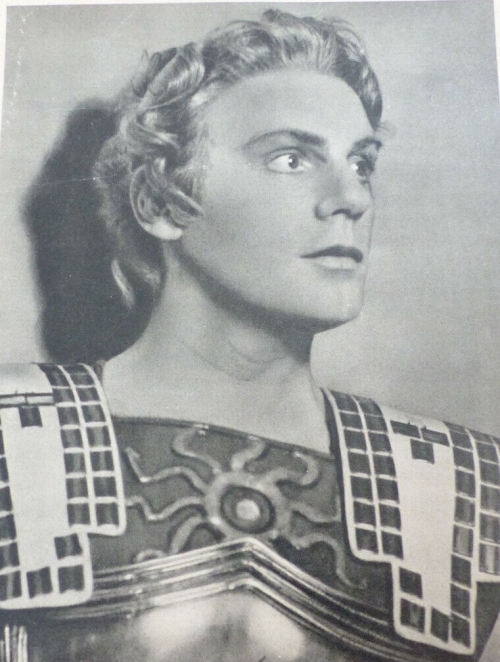 Gustaf Gründgens in the role of Alexander in Baumann’s play

These different accounts have much to do with Baumann’s later claim that Alexander was an expression of his growing unease at Germany’s aggression, and a plea for Hitler to treat his conquered peoples with clemency and respect as Alexander is shown to treat the Persians. In 1985 Baumann told the scholar Jay W. Baird that Goebbels had been offended by this message and ordered the play’s closure after its second performance (Baird, p. 168). Peter Jammerthal, however, in his dissertation on the Berlin State Theatre in the Third Reich, states that the play ran for seven nights, the last being a private performance for Hitler Youth members. He does agree that the play’s message was uncomfortable for the regime, but more because the depiction of mutinous generals and discord in the army sat ill with the planned attack on the Soviet Union which began on 22 June 1941 (Jammerthal, p. 211).

Most other writers agree that the invasion of the USSR was the primary reason for the play’s short run, with Gründgens worried that unwanted parallels might be drawn. (Alfred Mühr also suggests that Gründgens was increasingly disenchanted with the play and unhappy in the role (Mühr, p. 195)). However, there is disagreement as to how much Baumann’s alleged dramatization of his growing doubts about the regime affected the decision to close Alexander, and indeed how much the play truly does reflect such doubts. For all the praise of clemency there is plenty of talk of great men, great deeds, and the need to strive onwards which would not be out of place in standard Nazi propaganda rhetoric.

After the war Baumann forged a new and highly successful career primarily as a children’s writer, although his former role as the ‘bard of the Hitler Youth’ and the promotion and awards given to his work by the Nazi regime returned to haunt him in various literary scandals. His claims about Alexander and its cancellation were important in his attempts to distance himself from the past. But although he described himself as having increasingly withdrawn from glorifying the Nazis, his record suggests somewhat otherwise. In 1942 he edited and contributed to a volume of laudatory essays, Der Retter Europas (‘The Saviour of Europe’), marking Hitler’s birthday, and as late as April 1944 he addressed Hitler Youth members in Passau, using typical Nazi rhetoric about ‘Bolshevik hordes’ and treacherous neighbours, and warning against accepting ‘a dishonourable and deadly “peace”’ from their enemies (Rosmus, p. 280).

Baird suggests that Baumann had continued to toe the propaganda line out of reluctant necessity, and that his post-war children’s books reflected an ‘intellectual transformation’ (Baird, p. 171). Others, however, such as the literary critic Marcel Reich-Ranicki and the children’s writer Gudrun Pausewang took a more critical view, arguing that the post-war Baumann had never truly admitted the extent of his complicity with the Nazis and of his role in turning a generation of young people into willing fighters for Hitler and his regime through the propaganda in his songs. 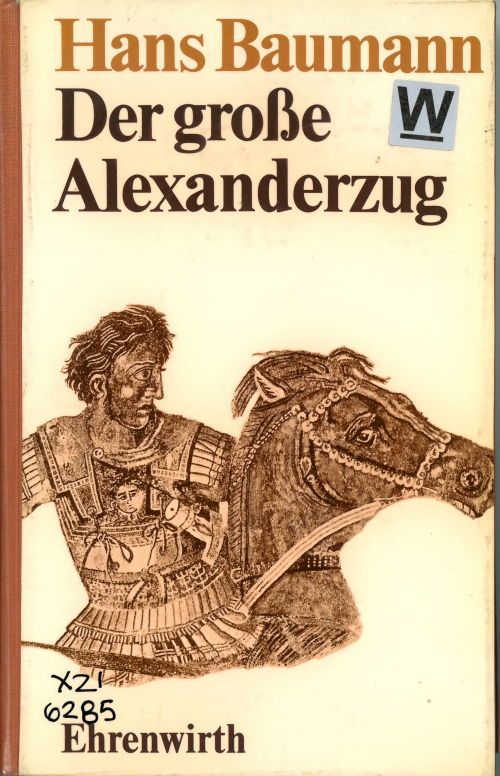 Baumann returned to the theme of Alexander the Great in one of his historical novels for children, Der große Alexanderzug, published in English by Stella Humphries as Alexander’s Great March (London, 1968; X.709/6502). The story is narrated by one of Alexander’s couriers, who concludes that ‘Alexander did not inspire my love’ but that he did have admirable qualities, especially in the way ‘he removed the distinctions between the conquerors and the conquered, [and] reconciled the nations in spite of the opposition of his own people’. This was what the older Baumann described as the key message of his Alexander play, and it is significant that he ended his children’s novel on the same note. Was it perhaps a message to his critics, and a reinforcement of his argument that Alexander was a veiled critique of aggressive Nazi expansionism? We will probably never know, but the history of this play and its author tell a fascinating if inconclusive story.