There are countless adaptations of the Alexander Romance, a collection of fantastical stories about Alexander the Great originally brought together in Greek, probably in the third century AD. Among the earliest adaptations to appear in print was Hartlieb’s Alexanderbuch. Nine editions of this German translation are known to have appeared from 1473 to 1514 at Augsburg and then Strasbourg. Each is enriched with woodcuts that depict, for example, Alexander’s first encounter with his man-eating horse Bucephalus, his meetings with naked philosophers, and his discussions with talking trees. By comparing the editions, it’s easy to see how the illustrations fall into three distinct categories and to begin to understand something of their development over time.

Johann Hartlieb (c.1410-1468) was a physician who wrote the Alexanderbuch around 1444 for his patron, Duke Albrecht III of Bavaria. His principal source appears to have been the popular Historia de preliis, which in turn was a Latin-language translation of a long lost Greek text made in the 10th century by Leo of Naples. That said, Hartlieb’s text begins with the phrase ‘Hereafter followeth the story of the Great Alexander, which was written by Eusebius’, and Hartlieb’s German adaptation is as a result often indexed under Eusebius of Caesarea in many reference works and catalogues.

Hartlieb’s text circulated in manuscript for three decades until Johann Bämler issued the first printed edition at Augsburg in 1473. His publication is illustrated with nearly 30 woodcuts, many seemingly inspired by the miniatures in a manuscript now at the Pierpont Library in New York (MS M.782). With the exception of the frontispiece portrait (see below), the same woodcuts then appear in three subsequent Augsburg editions (1478, 1480 and 1483) printed by Anton Sorg. Among them is the image of Alexander in a diving bell. 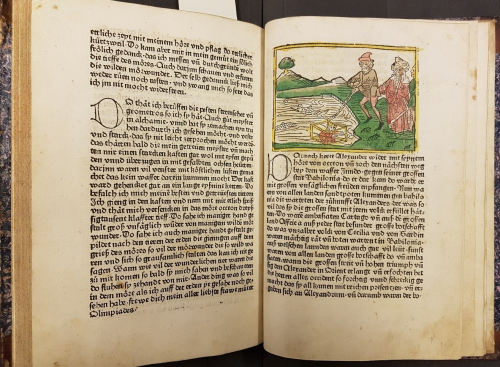 The Greek Alexander Romance (Stoneman, Book II, Chapter 38) talks of a descent of 464 feet to the bottom the sea, but here the impression is of a rather cramped-looking Alexander being lowered into a fish pond.

The next group of early editions are all published in Strasbourg. (Unfortunately no copies can be traced of a further Augsburg edition of 1478 reported in the Incunabula Short Title Catalogue). These Strasbourg editions (1488, 1493 and 1503), whether issued by Martin Schott or Bartholomäus Kistler, are curious because they contain broadly the same woodcuts as seen in the Augsburg volumes, but they have been redrawn and printed in reverse. 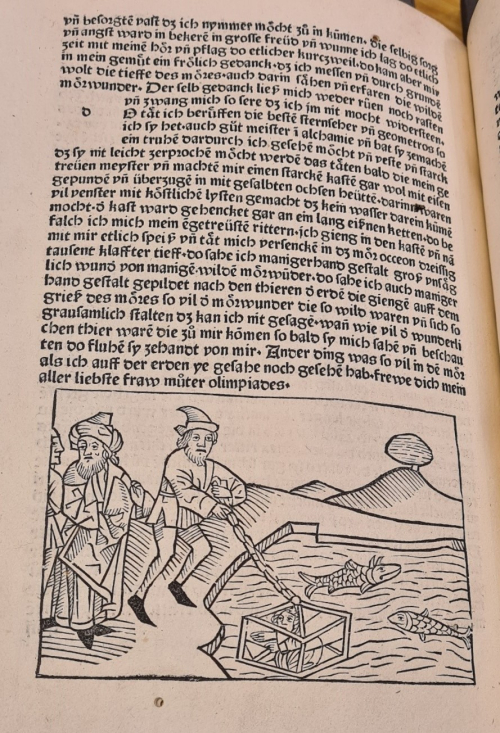 The most obvious explanation is that they were created by copying or tracing the illustrations in one of the earlier Augsburg editions.

The last of these early Hartlieb editions also appeared in Strasbourg, but this time from the press of Matthias Hupfuff. Visually, this work is very different, with the text printed in two columns for the first time. The woodcut illustrations are also different, although the subjects are much the same. In the new woodcut of the diving bell, Alexander is still in an impossibly cramped vessel, but there is only one person on the shoreline instead of the usual three. 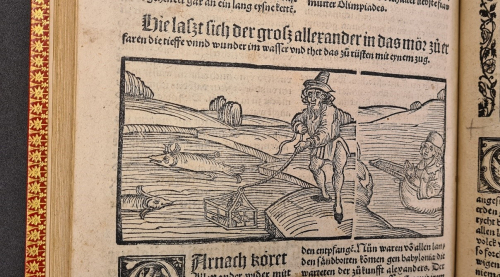 In common with other illustrations in this 1514 edition, the woodcut appears to have been extended, unsatisfactorily, by the addition of a piece from a different illustration. This opens up the possibility that the woodcuts were not made specifically for this edition, and were in fact being re-used. 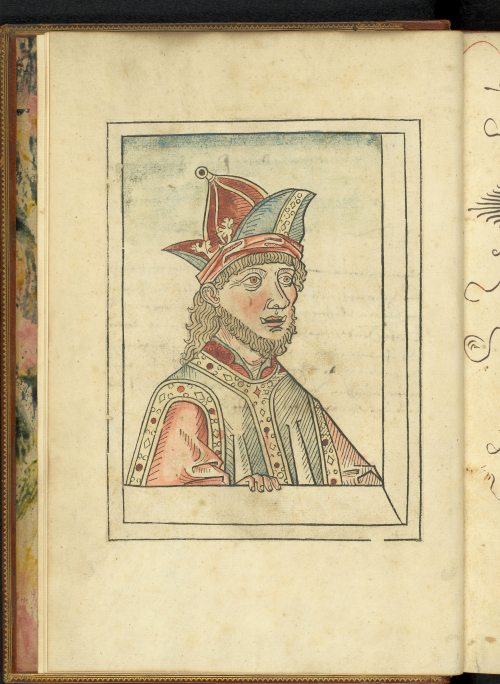 Alexander with boars’ tusks in the Bämler edition of 1473. © National Library of Scotland

The source for this strange feature may ultimately lie in the Greek Alexander Romance, which tells us that ‘his teeth were as sharp as nails’ (Stoneman, Book I, Chapter 13). In Hartlieb’s German, this has become ‘Sein zen waren garscharpff als eines ebers schwein’ (‘his teeth were as sharp as those of a wild boar’). The portrait has the same features as one seen in a Hartlieb manuscript now at the Universitäts- und Landesbibliothek Darmstadt (Hs. 4256), and the two may have had a common model. It is replaced in other editions up to 1503 by a full-length portrait of a seated Alexander without tusks.

The British Library exhibition Alexander the Great: The Making of a Myth covers 2,300 years of storytelling about Alexander, and runs until 19 February 2023. Four editions of Hartlieb’s Alexanderbuch are on display, including a copy generously lent by the National Library of Scotland that shows Alexander with the mysterious boars’ tusks.