As part of the events programme accompanying our current exhibition, ‘Breaking the News’, curators from the European, Americas and Oceania Collections department took part in an online 'Meet the Curators' event to introduce some stories about news media in the countries they cover. This blog post is based on one of the talks given at that event.

‘Breaking the News’ also means reporting events of historical importance. Battles often are. The Battle of Trafalgar was one of the most famous battles in British naval history, worth reporting internationally. On the 21st of October 1805 the victory of the British fleet, led by Admiral Lord Nelson, contained Napoleon’s ambitions to invade Britain. Lord Nelson was mortally wounded during the battle and the official despatch was written by his second, Admiral Collingwood.

How was this event reported in European news? How long it did it take for the ground-breaking news of the victory to circulate, in an age of slow-travelling information? 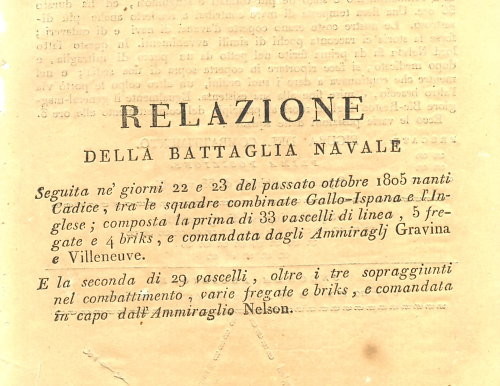 We have recently acquired a very rare Italian account of the battle, a bifolium published in Italy, by the Frugoni printing-house in Genoa and by Carlo Bocca in Turin, in 1805. It is titled Relazione della battaglia navale seguita ne’ giorni 22 e 23 del passato Ottobre 1805 nanti Cadice, tra le squadre combinate Gallo-Ispana e l’Inglese [...]. Not many other copies of this account are recorded in Italy, and this is the only one in the UK. 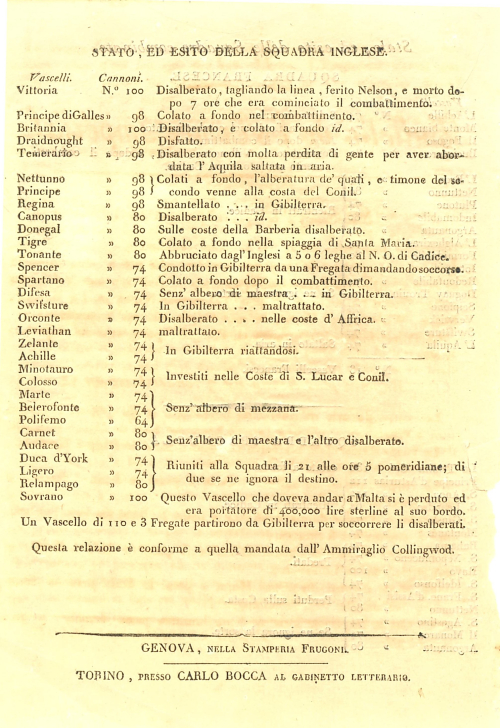 The account opens with a description of the composition of the Royal Navy fleet against the combined fleets of the French and Spanish navies, followed by a report of the circumstances in which Lord Nelson lost his life. The description is in accordance with Admiral Collingwood’s despatch from the battle, published in the London Gazette on the 6th of November 1805. This proves that the author of this document read Collingwood’s despatch. Perhaps the news arrived by postal ship from Spain to Genoa and from there it was carried by horse to Turin, where it was translated to Italian and then printed. The only thing we know for sure is that this account was published in the same year 1805, so sometimes between November and December.

The age of the Napoleonic wars was the moment communication started to become global; transmitting information and news from various corners of the empires become essential for the European powers. 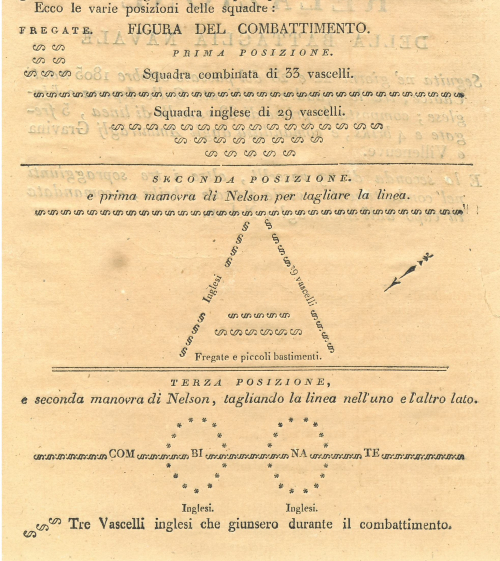 I would like to draw your attention on my favourite element of this document, which you can see in the image above. This is an illustration showing, by means of typographic elements, the order of battle of the two sides, and their two successive changes of formation, for a total of three positions. I find this a rather clever use of typography, which visualizes Nelson’s strategy better than prints, or his manuscript memorandum that is held in our collections [https://www.bl.uk/collection-items/admiral-nelsons-trafalgar-memorandum].