Everybody needs a patron, nobody more than the medieval or early modern author.

Erasmus dedicated one work to four successive patrons (Carlson 85; also 45). The assumption was that the patron would respond with a payment, sometimes delivered on the spot (Carlson 85). Hence the delicious title of Richard Firth GreenŌĆÖs Poets and Princepleasers: literature and the English court in the late Middle Ages. 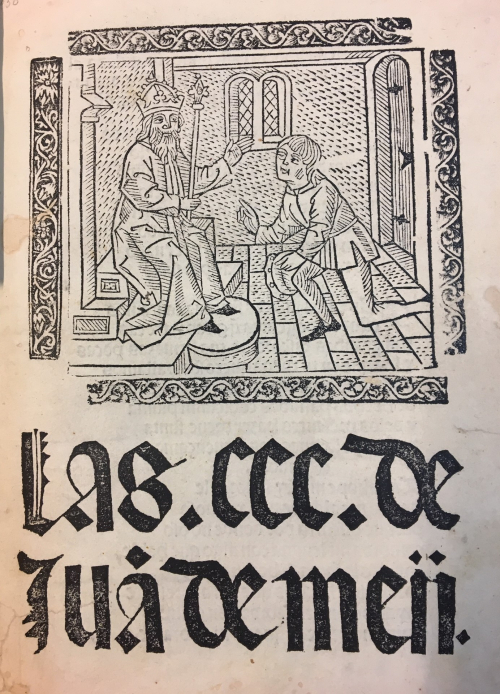 Here we see the poet Juan de Mena doffing his cap to King John II. (Of course, the woodcut obviously comes from some other work, but such reuse was commonplace.)

Another popular scene shows the patron, the author and the book. ItŌĆÖs probably the norm for an author to be shown presenting his work to his patron. 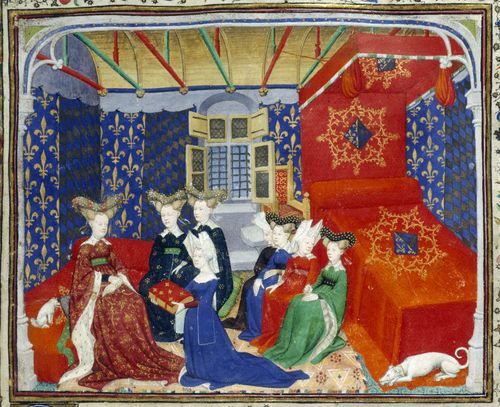 But in other cases the patron is pretty unambiguously doing the presenting. HenryŌĆśs iconography is probably the older, as it has been traced back to images of Justinian handing down the law.

Here we have Fray Antonio de Montesino kneeling before Ferdinand and Isabella, the Catholic Monarchs. The book is his Spanish translation of pseudo-Ludolph of SaxonyŌĆÖs Vita Christi (Alcal├Ī de Henares, 1502-03; C.63.i.1.). 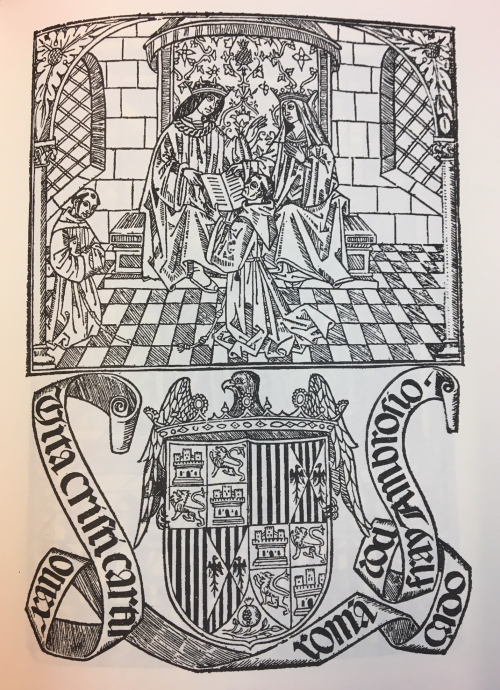 Lyell (385, n. 150) thinks the presenter is the patron Francisco Xim├®nez de Cisneros, the recipients the patronŌĆÖs patrons the King and Queen, and that the humble translator, Montesino, is literally sidelined.

The tug-of-love between King and Cardinal makes it hard to see who is giving and who is receiving.

So just remember that this festive season.

The medieval archives of the Crown of Aragon are generally said to be richer than those of neighbouring Castile. TheyŌĆÖre an invaluable source for scholars of all aspects of cultural history, including the history of the book.

And of weird stuff.

He had the CidŌĆÖs sword:

He had a piece of cloth decorated with the magical sign or seal or knot of Solomon: 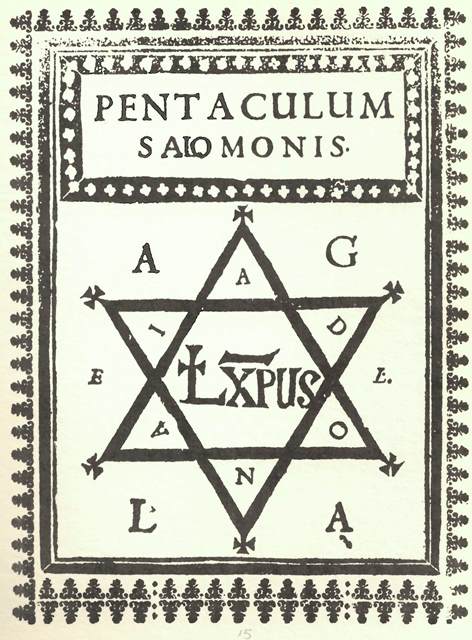 Even these apparently harmless references to items showing the Armed Man turn out, as explained by Joan Evans, in her study, Magical Jewels of the Middle Ages and the Renaissance particularly in England, to be amulets: ŌĆ£in many instances those [stones] that include figures of armed men confer courage and victory in battleŌĆØ (p. 49), ŌĆ£for alectorias, for instance, the sigil of an armed knight and consecration by nine masses is prescribedŌĆØ (p. 71): 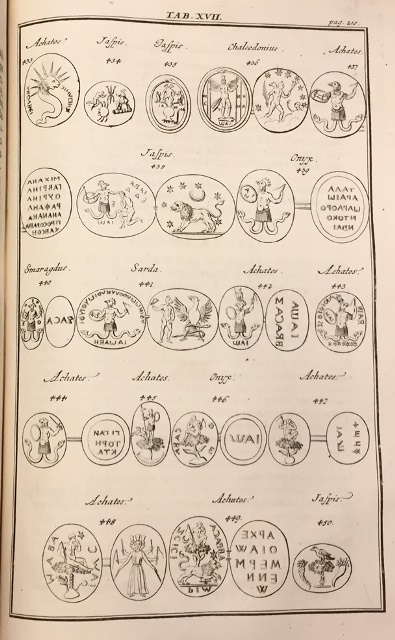 There are nine or so references to ŌĆ£serpentsŌĆÖ teethŌĆØ. These were actually prehistoric arrow heads or fossils, and were used to test food for poison. Martin had some mounted on a branching piece of coral, to form what in English we call by the French name of languier:

Coral was used as a teething ring, because it too was thought to have protective powers:

And how could he fail to have:

As Roca tells us, citing a letter of 1379, unicorn horn too was proof against poison : ŌĆ£la qual val contra ver├ŁŌĆØ (p. 54). 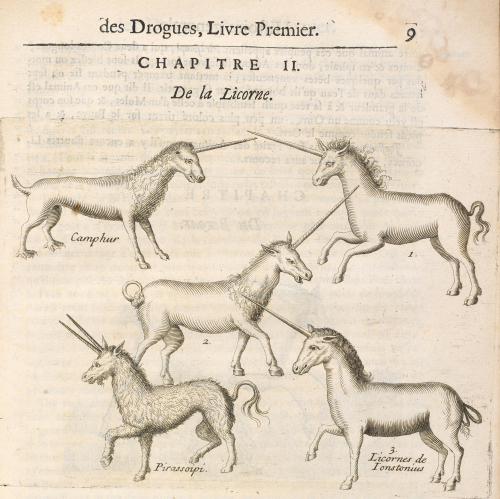 Martin wasnŌĆÖt some dark-age wizard who crammed his palace with superstitious rubbish, although he might have been unduly afraid of poisoning. He was also a patron of medical schools in the modern sense, and itŌĆÖs likely many of these gewgaws were family heirlooms, as they also appear in the inventory of James II (1267-1327), his great grandfather. And these old beliefs died hard and in the 1720s the existence of the unicorn was still a matter of debate.

Joan Evans, Magical Jewels of the Middle Ages and the Renaissance particularly in England (Oxford, 1922) W2/7263

You can discover many more magical artefacts in our current exhibition Harry Potter: a History of Magic, which runs until 28 February 2018

Did you have to hand in your wand when you came to the British Library to see Harry Potter: A History of Magic? ThereŌĆÖs a reason for that.

When Arnau de Cabrera entered judicial combat with Bernat de Centelles in Barcelona in 1274, both parties had to declare before King Jaume I ŌĆ£I swear I am carrying no magical weaponsŌĆØ [quod non deferebant aliquid quod haberet virtutem]. 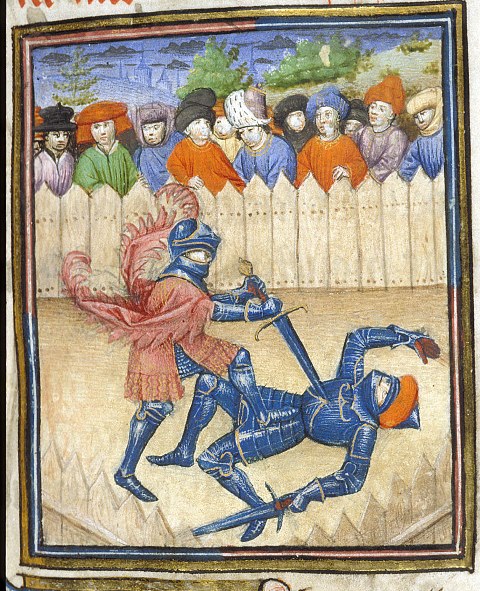 Arnau de Cabrera however denounced his opponent for bearing the sword of Vilardell: no-one who bore it could be defeated or killed [ŌĆ£portavit ensem de Villardello, qui quidem ensis habet virtutem ut nullus subcumbere vel superari possit qui illum in bello detuleritŌĆØ]. It also had the quality that if it was put point down it righted itself.

Apparently, BernatŌĆÖs father, like any good parent, had bought the sword for him for 500 maravedis. He had also asked the Prior of St PaulŌĆÖs in Barcelona for a shirt which again prevented its owner from being vanquished in battle.

And whatŌĆÖs more Bernat was wearing an iron cap which contained a precious stone called diamas, supplied by his brother Gilabert: the bearerŌĆÖs bones could not be broken.

The king found for Arnau.

The Sword of Vilardell acquired its powers because it was forged at a particularly propitious astrological conjunction. 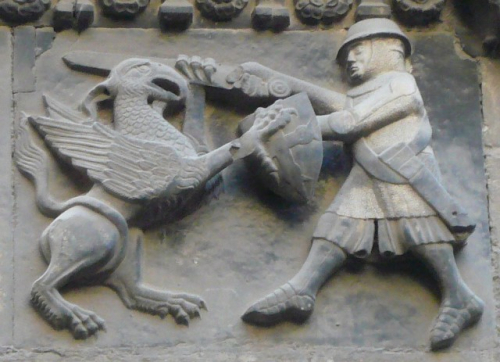 Relief from Barcelona Cathedral showing Vilardell fighting a griffin with his magical sword. (Photograph by Pere L├│pez from Wikimedia Commons.

The swordŌĆÖs original owner, Vilardell, went out one day with an ordinary sword to cut wood. He did a kind deed for a poor man who replaced his old sword with a new one and then disappeared. Vilardell tested the new sword by splitting a rock with it (still to be seen) and then slayed a dragon. So in the early accounts it was a holy weapon not a magic one.

The sword eventually found its way to the Mus├®e de lŌĆÖArm├®e  in Paris, where you can see it.

Virtually nobody in the Middle Ages doubted the existence of magic, or its efficacy. What the Church for instance objected to was the use of magic for evil ends.

Modern-day surveillance equipment will (hopefully) pick up any concealed weapons, but magic ones (and I donŌĆÖt want to alarm you) might be beyond its reach.

80 years ago today, on 18 July 1936, Spanish generals, later led by Francisco Franco, staged an uprising . By 1 April 1939 what became the Spanish Civil War was over and Franco made a triumphal entry into Madrid. Three years of war and 40 years of dictatorship (the General├Łsimo finally died on 20 November 1975) turned Spain from what had been a progressive republic with a programme of mass literacy and the most liberal divorce laws in Europe to a pseudo-medieval dictatorship, priest-ridden, vindictive and subject to famine.

Regressive regimes often look back into history to legitimise themselves, and FrancoŌĆÖs was no exception. The regimeŌĆÖs appropriation of three historical symbols is described below:

Francoism ŌĆō motto [Espa├▒a] ŌĆśUna, grande, libreŌĆÖ ŌĆō looked back with nostalgia to the time of Ferdinand and Isabella, the Catholic Monarchs, who united Castile and Aragon by marriage in 1469 and won Granada from the Moors in 1492. What better emblem for the new-old Spain than the Yugo y flechas, Yoke and arrows? 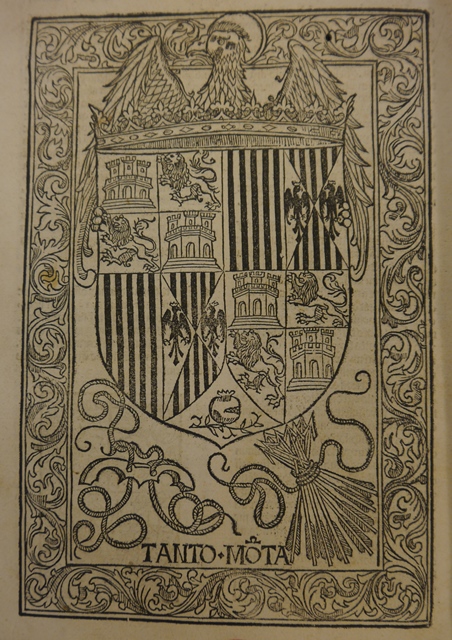 Coat of arms with the yoke and arrows motif from a 16th-century Rationale divinorum officiorum (Granada, 1504) 1474.dd.9.

The Gordian knot, attached to a broken cord, signifying that the end justified the means, was juxtaposed with the arrows bound together, a version of the Roman fasces (unity is strength).

It also represented the initials Y (Yoke-Yugo-Ysabel) and F (Arrows-Flechas-Fernando). 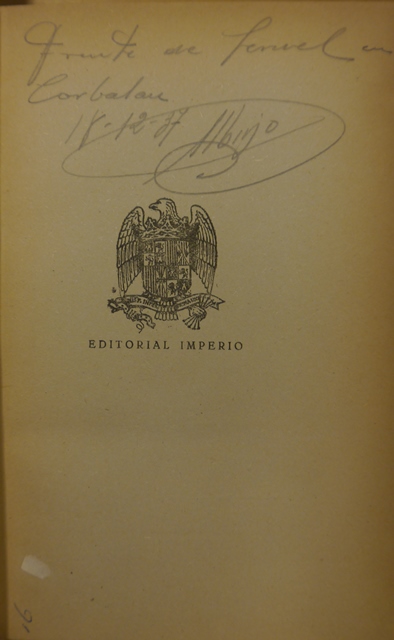 The appeal to the political strongman of the 20th century is obvious.

After the Civil War, and when I first saw Madrid in 1975, it was everywhere ŌĆō banknotes, public buildings, etc. It was added to the flag. 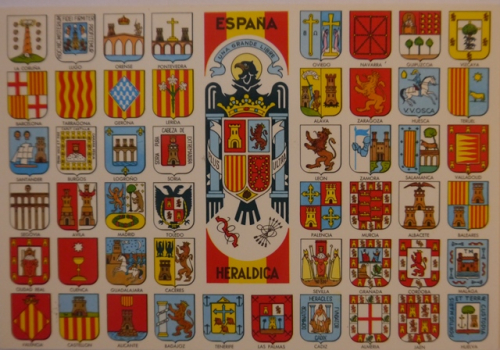 A law of 2007  called for the removal of Francoist insignia.

The historical Cid, Rodrigo [Ruy] D├Łaz de Vivar (ca. 1043-1099),won Valencia from the Moors. He was probably neither more or less cruel than any other medieval knight.

His deeds are sung in the Cantar de Mio Cid (circa 1207). Here heŌĆÖs praised for his moderation. His motivation is political rather than ideological: heŌĆÖs no culture hero fighting for Spanish Christian values against the Moor: Moors and Christians are both his allies and his enemies. 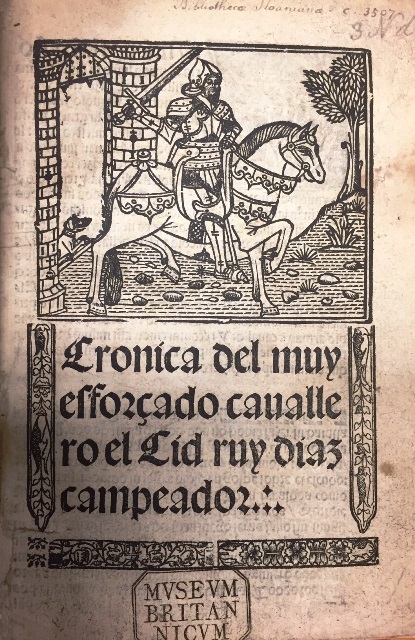 The domestic element is strong in the Cantar: The Cid takes revenge on his son-in-law princes who batter his daughters, and this was extended by Guill├®n de Castro (and hence Corneille in Le Cid, who focus on his marriage. 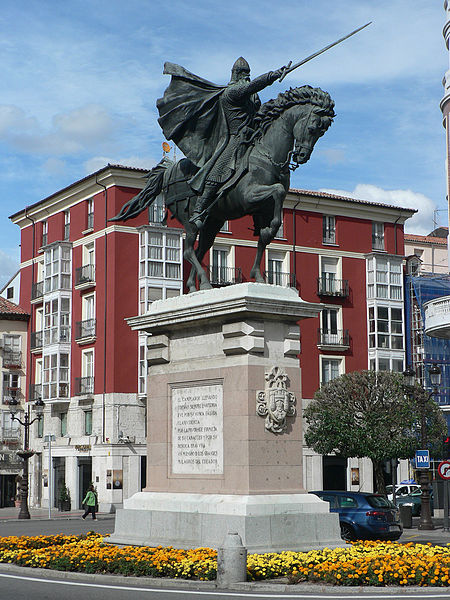 Statue of The Cid by Crist├│bal Gonz├Īlez Quesada in Burgos, unveiled by Franco in 1955. (Picture by ElCaminodeSantiago09 2006 via Wikimedia Commons. CC BY-SA 2.0)

Quite a benevolent figure. But by 1939 he has regressed and has become as primitive as Franco himself, a symbol of a unified Christian Spain fighting the Crusade, which was what the Francoists called the Civil War. 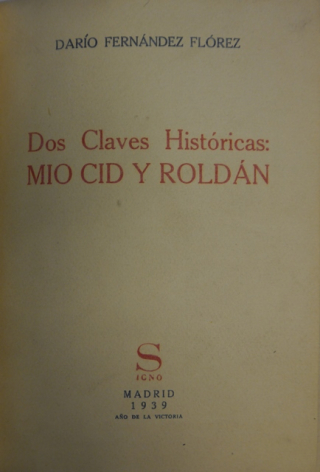 She and Fernando of Aragon married in 1469: Castile and Aragon were united in person but were separate kingdoms with their own laws until 1715.

Theirs was a magnificent court, full of latter-day troubadours and Latin humanists and decorated with Flemish primitives. And obviously their reign founded various institutions of the modern state: they patronised the introduction of printing, exempting imported books from tax in 1477 ŌĆśBecause foreign and Spanish merchants have recently brought in many good books, which redound to universal benefit and the ennobling of our kingdom ...ŌĆÖ.

And Nebrija dedicated the first Spanish grammar to Isabella. 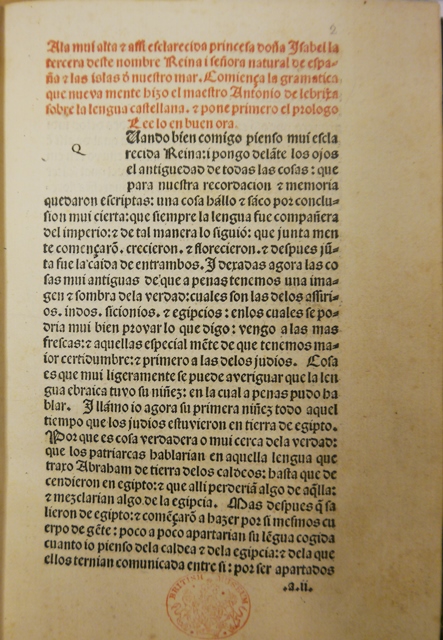 ItŌĆÖs only fair to point out that the Catholic Monarchs were not wholly benevolent or modern in outlook: they also ordered the expulsion of the Jews  in 1492.

By 1939 the Queen had regressed. Franco made her the model of the 20th-century Catholic wife and mother, ready to make every sacrifice for church and state: she was said to have sold or pawned her jewels to finance the voyages of Columbus, and swore not to change her chemise until Granada was delivered from the Moor. In 1958 he tried to have her canonised. 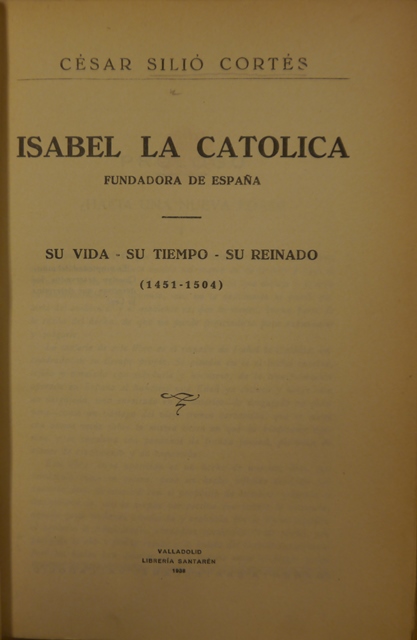 This life of the Queen draws parallels between the contemporary situation in Spain and her reign. For C├®sar Sili├│ Cort├®s, IsabelŌĆÖs reign saw

the transformation worked in Spain as an already decadent age was being replaced by a new one, with its roots in the past [...] made gay with plumes of youthful growth, swelling with plans of growth and expansion. [...]

His book had been begun with the intention of studying these great changes ŌĆō a revolution from above ŌĆō in tranquility, but

the fates have wished it to be written amid the clamour and horrors of another revolution undertaken by the canaille of the river beds, in which Spain continues to be bled dry as the author writes these lines and whose significance will be given to us by the future [...]