The British Library has joined forces with the Central and Eastern European Online Library to connect to open access electronic resources and preserve ephemeral material about society and health in Southeast Europe during the pandemic in 2020.

Since 2006 the Central and Eastern European Online Library has provided access for our users to a growing collection of 2,300 humanities and social science journals from Central, East and Southeast Europe. This collection also includes more than 5,500 grey literature items and over 4,200 ebook titles.

A resource ‘Covid-19 in Southeast Europe’ has been created for information and research into the activities of the public health professionals and organisations in the fight against the infection. The resource provides useful data on the provision of public health infrastructure and Covid-19 hospitals, and details of the measures employed in combating the pandemic by country and region within Southeast Europe.

This online resource documents how the appearance of yet another virus from nature, SARS Cov-2, has affected the social, cultural, private and religious life and the health of the peoples of Southeast Europe. The material gathered in one place demonstrates the relativity of any current data comparison, such the one published by Forbes, ‘100 Safest Countries in the World for COVID-19’ , based on the Deep Knowledge Group report, and highlights the importance of locally available data. Some ambiguities and contradictions in publicly available reports demonstrate the lack of world leadership in the pandemic. On the other hand at the local level the data show various attitudes and differences in opinions between experts in advisory roles. These new experiences only serve to show the gravity and uniqueness, scale and complexity of the crisis the world is facing at the moment.

As far as Southeast Europe is concerned, one conclusion that can be drawn is that so far major casualties and the collapse of the healthcare systems have been avoided, and all countries have managed to preserve the functioning of the vital systems of state and society. 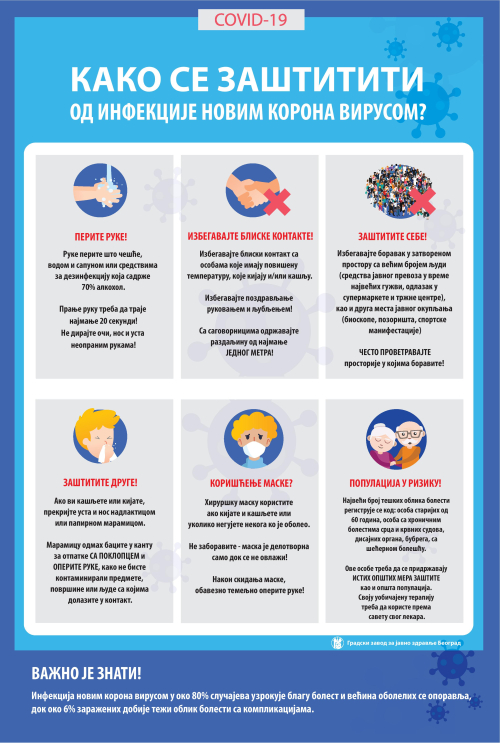 “How to protect yourself from a new coronavirus infection” A poster published regularly in the Belgrade daily Politika.

We are grateful to the Serbian public health institute for giving us permission to reuse their open access material, and to the Central and Eastern European Online Library for harvesting and arranging this material for our users. 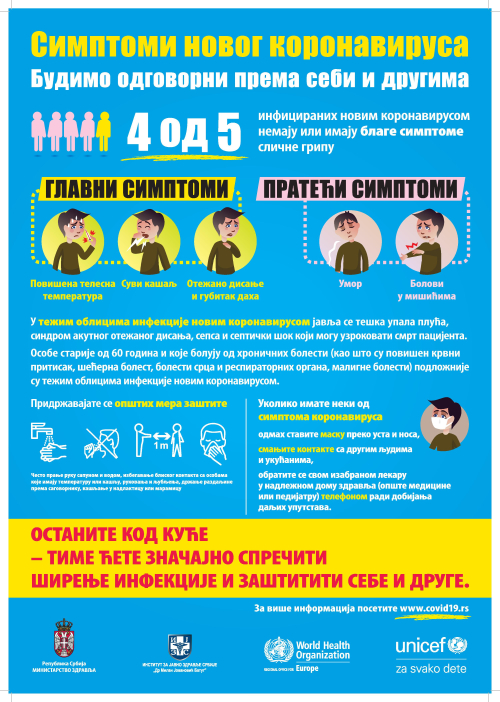 The symptoms of a new coronavirus. Let us be responsible to ourselves and others. 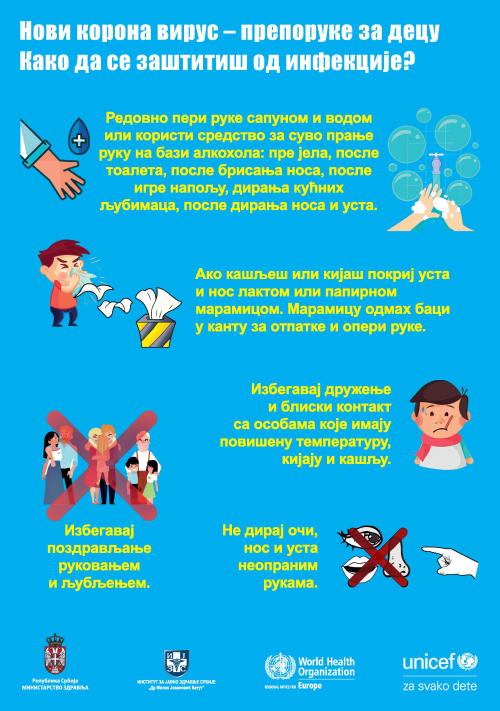 The new coronavirus - recommendations for children. How to protect yourself against infection 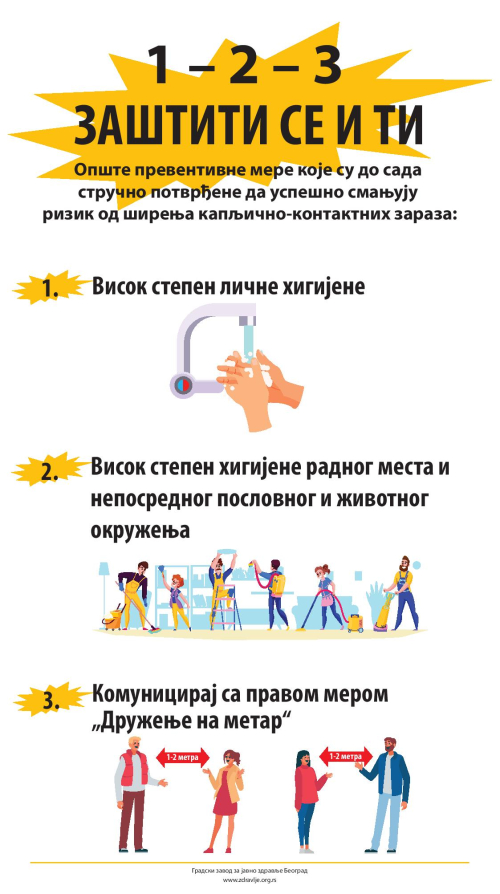 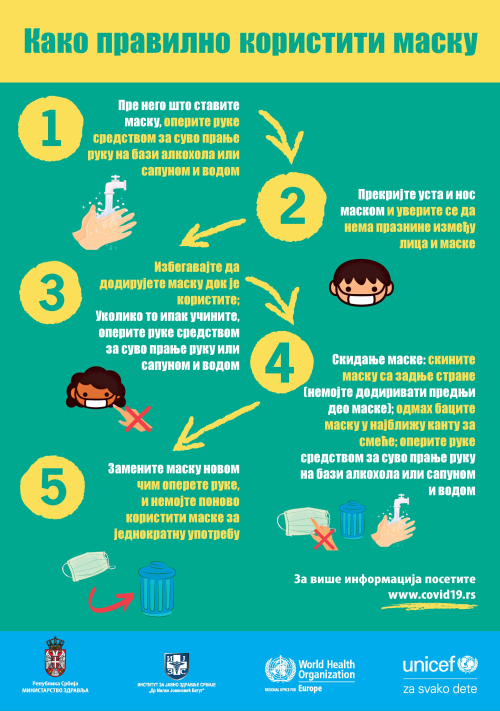 How to use a mask properly. 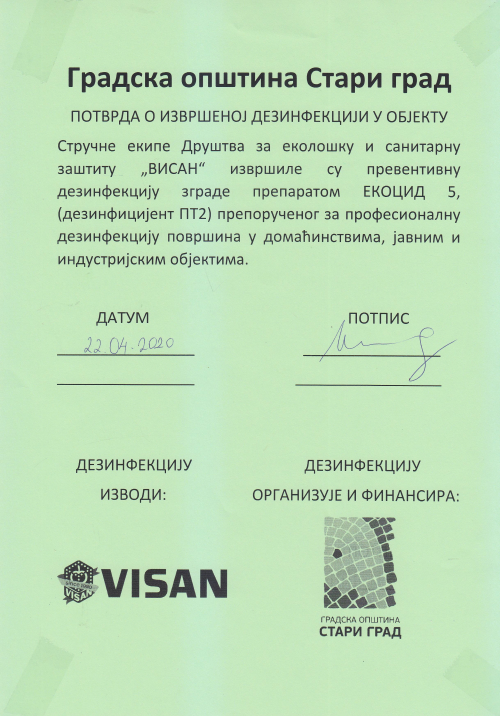 Disinfection of the City of Belgrade’s Stari grad borough. Certificate of a building disinfection. 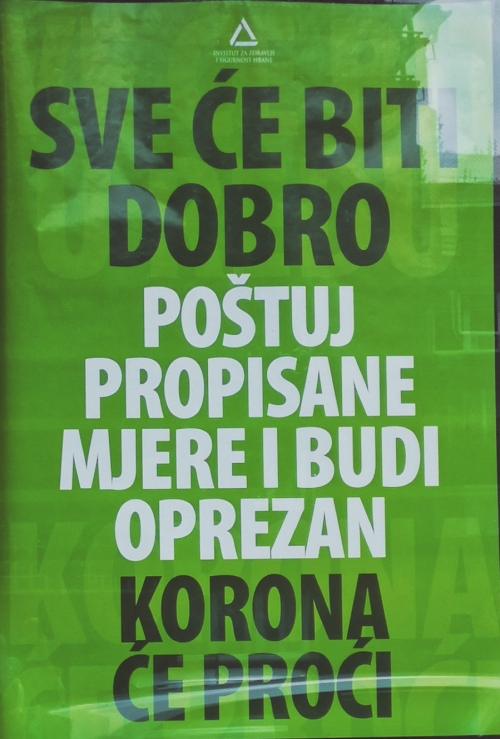 A leaflet from the Sarajevo Institute for Health and Food Safety put in a shop window reads: “Everything will be fine. Follow the prescribed measures and be careful. The coronavirus will pass.”

Other open access content related to research into Covid-19, including scholarly journals, can be located via our Find Electronic Resources pages.

The colleagues and partners in the Central and Eastern European Online Library and the British Library believe that access to e-resources is important, necessary and useful. However, ‘e-only’ – especially in connection with social distancing – cannot and should not replace the real human relations, interactions and encounters, which hopefully will return to our everyday life in the near future.

The more languages you speak, the more perspectives you have on the world. Bulgarian, Czech and Hungarian proverbs capture this observation: ‘Човекът е толкова пъти човек, колкото езика знае’ (Bulgarian: a person is as many times a person as many languages knows), ‘Kolik jazyků znáš, tolikrát jsi člověkem’ (Czech: as many languages you know, as many times as you are a person), ‘Ahány nyelvet beszélsz, annyi ember vagy’ (Hungarian: as many languages you speak, as many persons you are). And a similar proverb has also been attributed to that famous polyglot, Emperor Charles V. By drawing on linguistics and anthropology, Edward Sapir and his student Benjamin Lee Whorf suggested that the proverbial language-thought nexus is universal, so that the structure of a language has an influence on the speaker’s thinking and behaviour even if the speaker is unaware of this influence.

Does the Sapir-Whorf hypothesis apply to non-alphabetic – in particular, numeric – languages as well? Learning numeric systems other than the prevailing Arabic and Roman ones, however, would be a challenge, as only a few other systems are preserved in Europe, mainly alphabetic numerals, for instance in Georgian, Greek and Hebrew. Why do we ‘speak’ so few numeric languages in comparison with alphabetic languages? If Sanskrit, the origin of Arabic numerals, and Latin, the origin of Roman numerals, had their own numeral systems, can we assume that each language once had its own symbols for writing numbers? If so, how, when and why did they abandon their own numerals? 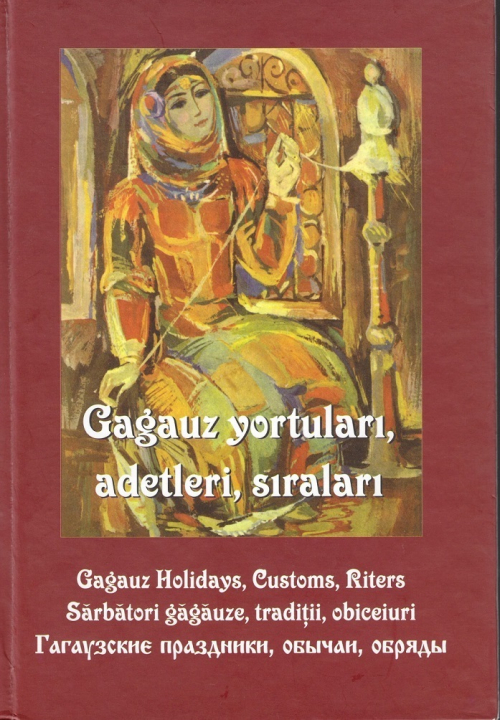 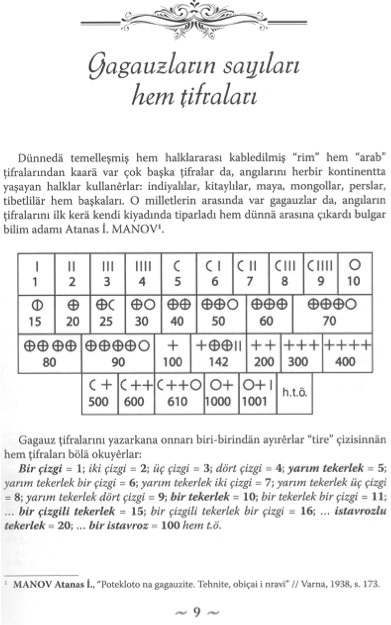 The Gagauz are a Turkic people of Orthodox Eastern Christian religion. One of Europe’s 60 regional and minority languages, Gagauz belongs to the Oghuz, south-western branch of the Turkic language family, together with Turkish, Azerbaijani and Turkmen. Spoken by 140,000 people in Moldova, Ukraine, Bulgaria, Greece and other countries, Gagauz – in addition to Romanian and Russian – is the official language of Gagauzia, an autonomous region of the Republic of Moldova. Gagauz was mainly a spoken rather than written language until the mid-20th century. The orthographic changes from Greek letters to Cyrillic under Soviet governance and from Cyrillic to Latin after gaining independence imply profound political and cultural changes. Re-connecting with the Gagauz numerals and number system may perhaps be part of the efforts to construct a new identity.

Personal communication with Todur Zanet (May 2018) and Vitalie Sirf of the Moldovan Academy of Sciences (Aug 2018) reveals that the Gagauz numerals are not used any more, except in rare publications by leaders in cultural revitalisation. Gagauzians today use the Latin (Roman) script and Roman and Arabic numerals. Sirf adds that Gagauzians, both in Bessarabia and the Balkans, have been using Arabic and Roman numerals since the end of the 19th century.

The same set of Gagauz numerals Zanet brings to our attention (p. 9) were already published almost a century ago by Atanas I. Manov, a Bulgarian linguist. Manov’s brief account includes a statement that adds to the significance of these numerals, namely, the Gagauz men and women who used these numerals were illiterate.

Can numeracy precede literacy? The examples of other pastoralists, farmers, navigators and many other illiterate artisans who used complex calculations suggest an affirmative answer. Joseph Mazur, an American mathematician proposes that ‘mathematical writing predates literature by more than a thousand years.’ One can be illiterate and mathematically literate. This may sound counter-intuitive in our age of computers when literacy is more valued than numeracy and large portions of our population suffer under an alarmingly low level of numeracy. 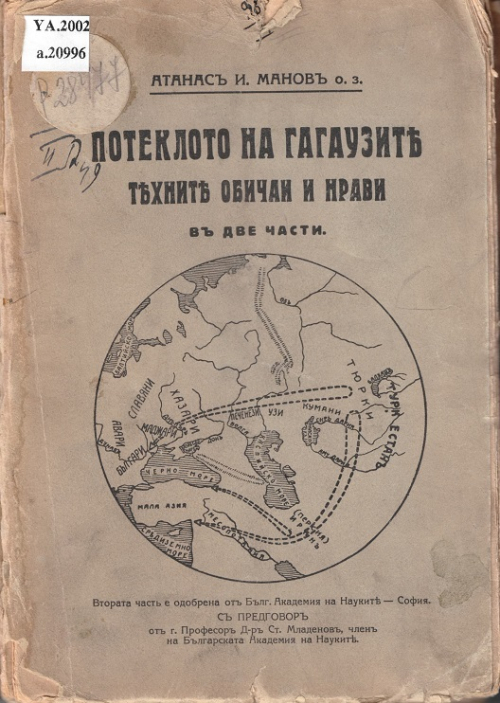 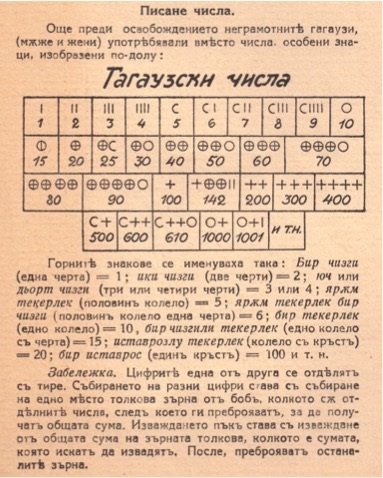 Gagauz numerals are written using four basic symbols (vertical stroke, cross, half-circle, full circle) and their superimposition (vertical stroke in a circle, cross in a circle). The six icons are easy to notch with a few strokes or made as impressions by simple tools, characteristics they share with others number symbols, which Karl Menninger has labelled ‘folk’ and ‘peasant’ numerals.

The symbol for hundred represents the highest value carried by an individual icon. This may suggest a base 10 (decimal) thinking, however, the Gagauz number system seems to combine decimal and vigesimal (base 20) elements. Base 10 is used up to 19 and base 20 from 20, similar to what Georges Ifrah found in Danish, Celtic (Breton, Welsh, Irish) languages, Basque and Georgian. The French for eighty, quatre-vingts, which literally means ‘four twenties’ is also a vestige of base 20 thinking.

Gagauz numerals are read from left to right and formed in three ways: (i) adding, (ii) multiplying adjacent symbols or (iii) combining addition and multiplication. For instance, addition is applied up to 499; multiplication for 500 and 1,000, and their combination for 600 and above. No sign but the relative values of adjacent numerals indicate the algorithm change from addition to multiplication and combination: if a lower value numeral precedes the next, the lower is interpreted as a multiplier. The algorithm change from addition to multiplication marked by sequence exists also in other number systems, for instance Ge’ez, the ancient Ethiopian, and ancient and current Chinese.

Examples of Gagauz numerals formed by addition, multiplication and their combination

Let’s convert some Gagauz, Roman and Arabic numerals and experience the joys of learning a new numeric language (the key is at the end of the post).

Converting one system to another raises awareness of the challenges people faced when trying to translate between different ways of counting. These transactions may have facilitated processes in which local numerals and number systems got lost in translation, and more widely shared systems for commercial, administrative and scientific communication were adopted.

According to the UNESCO Atlas of the World’s Languages in Danger all four Gagauz dialects are endangered, without any reference to their numerals. The Gagauz number system may be extinct, yet it is an important part of the world’s cultural heritage, even if not listed in the UNESCO list of Intangible Heritage , because it highlights the diversity of knowing the world, well, more precisely, the diversity of reckoning. Losing local number systems, just like losing alphabetic languages and local knowledge sensu lato, is a stark reminder of losing important perspectives we could have on the world. 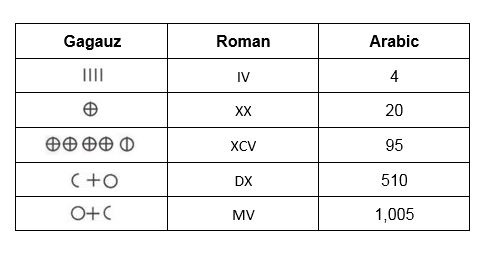 Joseph Needham with the collaboration of Wang Ling, Science and civilisation in China. Vol. 3, Mathematics and the sciences of the heavens and the earth. (Cambridge, 1959) OIK 509.51

Posted by Susan Reed at 10:00 AM in Language , Moldova , Writing | Permalink