Christmas is associated with sparkling lights that lift the eyes up to the stars in motionless awe. On Christmas 1875, a curious traveller wrote about a less-known yet equally magical light that drew his eyes below the horizon, a light that flared up with the breaking waves: sea sparkle. The traveller, count József Zichy, a politician of the Austro-Hungarian Monarchy, was on a semi-official Asian tour to expand trade and political relations, and to learn about the world through personal experience, a practice not uncommon among members of the aristocracy. 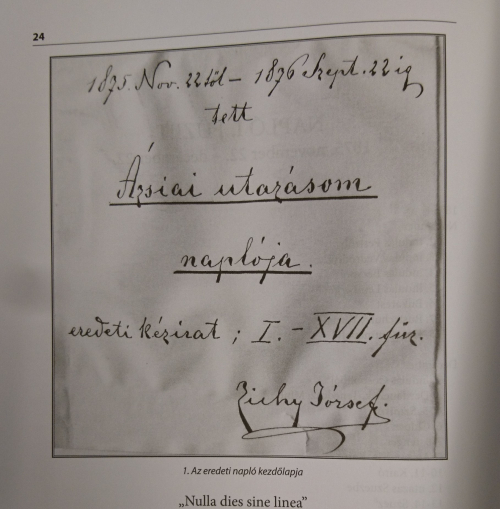 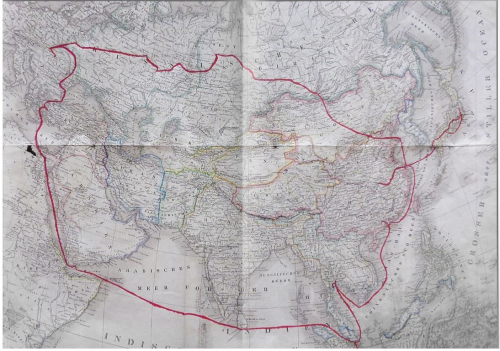 En route from Aden, Yemen to Pointe de Galle, Sri Lanka, in the Arabian Sea, , Zichy described his encounter with sea sparkle in a few words but with great precision:

December 22. Lat. 12.16 - long. 46.20
We are on open sea again […]. […] - In the evening we can’t help but staring at the sea’s phosphorescence, which is much stronger here than anywhere else. We are leaving behind a pretty fiery trail and gazillions of sparks are scattered when the waves brake on the side of our huge ship’s hull. - The weather is splendid, a mild breeze makes the heat more tolerable than it was in the Red Sea.

December 26. Lat. 9o12’, long. 63 o55’
[…] The evenings are not so beautiful any longer because the sea’s phosphorescence is much weaker here than it was in the Gulf of Aden; the weather remains good.
[Translation: Andrea Deri]

What Zichy observed was bioluminescence, generated by high concentration of tiny planktonic organisms, probably Dinoflagellates (δίνη, Greek, refers to whirling, swirling; flagellates, Latin, refers to the flagellum or flagella on the surface of the algae). However, a wide range of species of several taxonomic groups may bring about similar phenomena.

The cold glowing white-blue light of sea sparkle is the result of biochemical reactions within marine organisms. The light flares up with wave action that may be produced by walking, swimming or vessel movement. The light is assumed to deter the Dinoflagellates’ predators or act as a ‘burglar alarm’, which may attract secondary predators to prey on the primary ones.

Mariners have known bioluminescence for long time. Fishers and traditional navigators of South India’s Malabar coasts and around Bombay ‘have reported a luminous sea surface and at times a milky sea invariably during dark nights following calm or sultry weather and during overcast monsoon periods’ and glowing sea surface like fireflies in Bengal.

Bioluminescence is now even used as a tourist attraction to small islands off the south Indian coast. While Zichy mentioned some of them, Lakshadweep and the Maldives, the distance from the atolls and the time of the night did not allow him to record any further observations:

December 27. Lat. 8o 15’, long. 68o 34’
[…]Tonight we are going to pass between the Lakedires and the Maldives. To see these islands we will barely do because their shores are rather low. […]
[Translation: Andrea Deri]

Zichy did not have the public in mind when he wrote his diary. Yet, its publication by the Hungarian National Széchenyi Library and the publisher Széphalom with the editorial scholarship of Mihály Zichy, a member of the same family, adds great value to history, linguistics, anthropology, arts and sciences.

József Zichy’s entries also demonstrate the significance of personal diaries in environmental change research, especially when the traveller’s environmental and cultural observations include metadata such as longitude and latitude coordinates. Mapping Zichy’s observations shows that he was able to observe sea sparkles in deep sea also: an occurrence that may be of interest of current long-term and large-scale studies.

Zichy embodied the qualities of what we would call today a citizen scientist. He was keen to learn about the world through first-hand experience and use his insights for the public good. His guiding principle for keeping a diary features on the title page of his manuscript: Nulla dies sine linea (‘No day without a line’, that is no day should pass without a line written).

While Zichy was ‘only’ interested in the aesthetics of sea sparkle, he may have unwittingly made an important contribution to environmental history of the Arabian Sea in light of current studies on the possible nexus between increasing bioluminescent algal blooms and unfolding environmental change. Even if this is not the case, his observations certainly offer opportunities for interdisciplinary research, bridging humanities and environmental studies, a dynamically growing field of environmental humanities.

If you cannot frolic with luminous fellow creatures this Christmas, you may still dive into watching and recording (so easy with mobile phones!) a natural spectacle, inspired by Zichy, our fellow citizen scientist from the 19th century. Who knows where your Christmas diary might end up in the history of science?

Posted by Susan Reed at 10:00 AM in History , Hungary , Science , South Asia | Permalink

One of the things I wanted to explore as part of my tenure as the British Library’s translator-in-residence was the way in which dominant or colonial languages absorb minority languages and the tongues of the colonised, from speech patterns in Welsh or Irish forms of English that obviously originating in the Celtic languages (‘I’m just after seeing him’ ‘Cold I am’), to the many words from Hindi, Arabic, Nahuatl, Yiddish etc., that are so essential in modern English. After all, where would we be without, ‘Chocolate’, ‘Chutzpah’, or indeed ‘Alcohol’? Or indeed, the words ‘thug’, ‘loot’, ‘juggernaut’ and ‘shampoo’, all of which entered English from Indian languages over the course of the 300 or so years of British presence in India.

The son of an Indian father, I’ve for a long time been aware of the great lexicon of British India, A.C. Burnell and Henry Yule’s Hobson-Jobson, first published in 1903. The name itself, a mangling of the mourning cries of ‘Ya Hassan! Ya Hosain!’ in the Shia festival of Muharram, this eclectic and idiosyncratic glossary of words that entered English from the Spanish, Portuguese, Arabic, Persian, Chinese and Indian languages, has been called ‘the legendary dictionary of British India’ by none other than Salman Rushdie. Its influence has been great, with over 500 of its entries ending up in the OED, and the variety of its entries, including discussions of etymology, political asides and witty anecdotes, makes it a highly entertaining read. The entry for ‘mosquito’, for example, ends with the tale of a Scottish woman who, upon arrival in India apparently thought the first elephant she saw was an example of the dreaded mosquitoes she’d heard so much about! 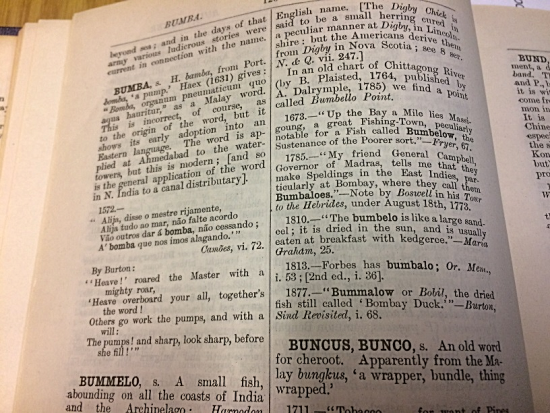 An entry from Hobson-Jobson for the word ‘Bumba’, borrowed by Hindi from Portuguese and by English from Hindi.

Of course, English was not the only colonial language, and at its pinnacle the spread of the Portuguese empire was wide enough to rival that of its British counterpart. Likewise, Portuguese has been similarly marked by its encounters with, for example, Tupi in Brazil, Kimbundu in Angola and the many Asian languages spoken in former Portuguese territories, from Konkani in Goa to Tetun in Timor. Two of my favourite examples of loan words in Portuguese are actually both Arabic in origin: ‘salamaleques’, from the Muslim salutation, meaning an excessive or exaggerated greeting, and ‘mameluco’, taken from the Egyptian Mamluk dynasty, which in Brazil came to be used to describe the offspring of one European and one Native parent, and more generally people of mixed race-origin. Working in the other direction, food lovers may have noted that the name of the popular Mumbai snack, Pav Bhaji, where a curry is soaked up with Western-style bread comes from the Portuguese word for bread, ‘pão’.

In a conversation with Barry Taylor, the BL’s curator for Spanish and Portuguese, I asked if he knew of a Portuguese version of Hobson-Jobson, detailing the Asian words used during Portuguese rule in Asia, or in Portugal itself. All Barry had to do was email the right person, and within a week I was in possession of both volumes of Sebastião Rodolfo Dalgado’s Glossário Luso-Asiático, the format of which pretty much mirrors that of Yule and Barnell’s tome. 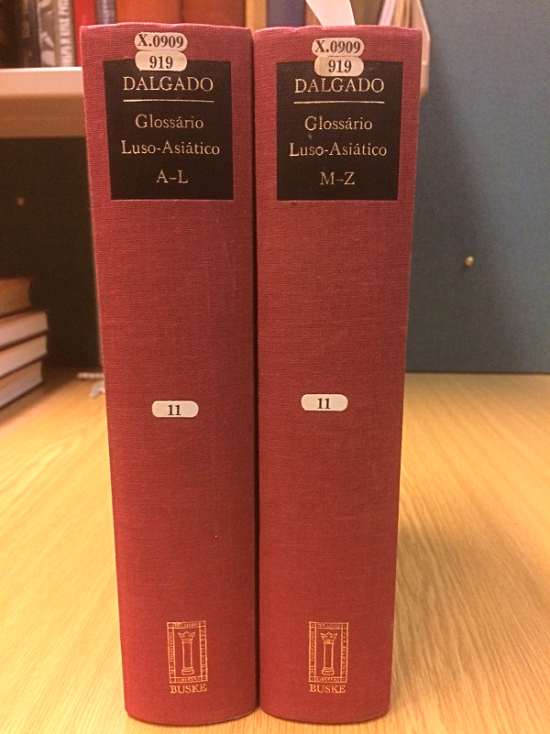 Though the Glossário lacks some of the wit of Hobson-Jobson, in its own way it’s as unique and idiosyncratic as its English-language cousin, by which it was clearly influenced, and which provided a source for some of its entries. Of Indian rather than European ethnicity, Dalgado was born into a family of Goan Brahmin Catholic converts, and as well as being a Catholic priest, wrote numerous studies of language in India, including a Konkani-Portuguese dictionary and several glossaries of Indo-Portuguese dialects across the sub-continent. Eschewing scholarly impartiality, his preface starts with a lament for the short-lived glory of Portuguese Asia, which despite leaving its traces across the continent in place names such as Colombo, Bombay and Formosa was very small by 1919. He takes solace in his belief that Portugal was ‘(the) heroic nation which, opening up the doors of the Orient, was the first to plant the seeds of Western civilisation, conquering lands for the king and gaining souls for Christ’, but is also quick to insist that ‘the Portuguese conquest is distinct from the others…owing to its efforts in bringing civilisation…and its highly egalitarian politics’. 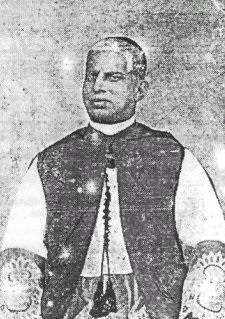 Just as Dalgado himself was the product of a complex Luso-Indian colonial context, cross-referencing the Glossário and Hobson-Jobson produces some interesting case studies For example, the English word ‘nabob’ did not come straight from the Hindustani ‘nawab’ but from the Portuguese corruption, ‘nababo’. The word originally described only the high-ranking governors who served under the Great Moghul, before becoming a ‘a title occasionally conferred, like a peerage, on Mohammedan gentlemen of distinction’. In English, however, it became far more familiar as a term used to describe those English people who returned from the East with great riches. Elsewhere, Hobson-Jobson notes that the term ‘Bengal’ once denoted a kind of wood from that region, but that it was barely used at the time of publication. The Glossário, on the other hand, describes how the specific term ‘cana de Bengala’ (Bengal-wood cane) was a specific term which was eventually shortened simply to ‘Bengala’, and in modern Portuguese is the common term for any kind of walking-stick. 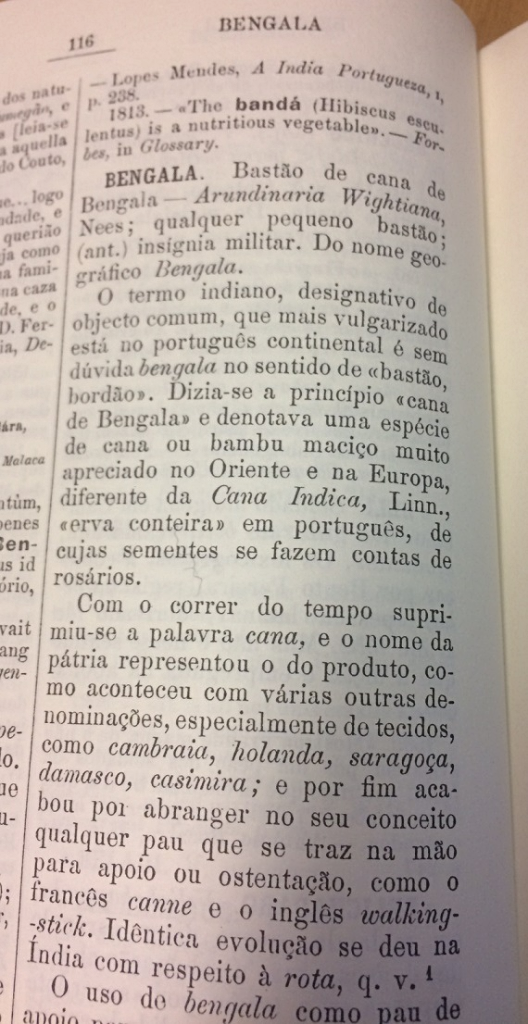 Entry for ‘Bengala’ from Glossário Luso-Asiático

Leaving aside other aspects of empire and colonialism for a moment, I feel one would be hard pressed to argue that English and Portuguese were not enriched by their encounters, violent or otherwise, with cultures in Asia, Africa and the Americas. To put these two books side-by-side is a fascinating comparative study of the differing fates of each country’s colonial project and a testament to the remarkable adaptability of language itself.