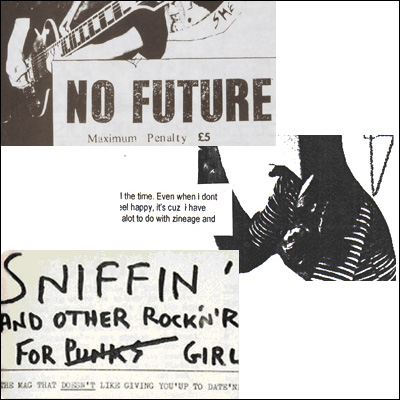 Image: Sample of zines from the Library's collections

Zines are typically self-published, highly visual and counter-cultural printed magazines and booklets. They are low-tech: a large proportion of zines are made on a photocopier, and more recently, are often art or photography based.

The Library has a huge collection of zines, ranging from football fanzines to punk zines from the 1970s and the Riot Grrrl movement in the 90s. I asked our curator Andy Simons a few questions about our collections, and most importantly, how designers can get their mitts on them.

Can you describe the history of zines?

Zines start before there were zines as such, in the late 19th Century but got a kick-start during the Great War. It was due to affordability of printing and the earliest (before photocopying) was mimeograph, on which a stencil was typed, then wrapped round a drum. When cranked, the printed pages came out the other end.

While the pre-1980s zines can appear a bit ropey in terms of production and design, the subjects are those unmet by the market in bookshops and news agents. Political parties, no matter how small, maintained their own printing activities so they weren’t involved in the field until recent decades, when the truly independent political activists wanted to scatter their words about. Sports and music enthusiasts were the main generators of zines – and they still are. But those who enthuse over a topic are the main ingredient in the zine mix.

One can be a good illustrator, such as Lucy Sweet’s artistically varied run of Unskinny (below) from the late 1990s. But such talent isn’t required, as long as you have something to say. 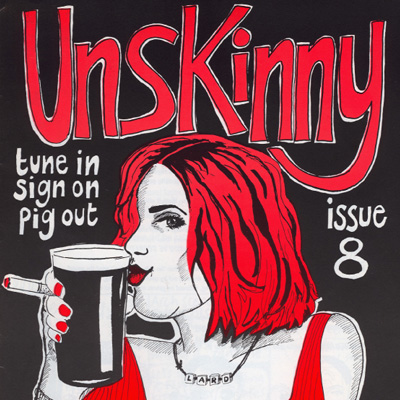 Can you explain why the Library has them and why they’re so culturally important?

Zines represent independent publishing by those who cannot already find their subject matter or feelings expressed in existing titles.  A common myth is that the British Library “has every book” or everything published in Britain. In terms of metaphysical certitude, this could never be true! Yes, there is the Legal Deposit obligation but, especially since the 1970s, the some producers of printed matter simply haven’t thought to do this.

It’s the anoraks who promote aspects of life that major publishers, including daily newspapers, ignore. These utterly keen commentators spin alternative webs that help to fill the passageway of our social history. You might ignore them, but the national library ought not. We cannot second-guess what enquiring minds of the future will want to know.

How did you personally get into zines?

The pre-photocopier age found indie editors using mimeo duplicating machines to publish their own things, usually after hours, using the equipment belonging to their school, church, or employer.  I had a record shop in the 1970s and sold music ‘fanzines’ and, when the punk scene broke, zines devoted to the new alternative bands.  Working in manuscript archives before I joined the British Library, it became obvious that, eventually, printed stuff takes on intellectual importance. It’s the evidence of people making the scene all those years ago. When I speak to groups here at the BL or at indie press fairs, I try to impress on them that what they’re doing has a valued history.

If users want to find zines on our catalogue, they need to search by the title of the zines.  Any other tips on how to find them?

Our zines aren’t catalogued as ‘zines’ and many of them have purposefully obscure, witty titles (Bleak Horizon, Small Axe, Pschitt, etc).  One can search keyword combos such as PUNK FANZINE, but I can send a sample list of them on request.

Lastly, if anyone makes zines, can they submit them to the Library’s collection?

All donations considered: andy.simons@bl.uk The British Library won’t every have every zine, but we need to document as many as we can.

Go to the British Library catalogue

Posted by Creative Industries at 1:26 PM