There has been quite a lot of publicity about a cache of board games, produced in Germany during World War II and based on that same war, being sold, including a story by the BBC commenting on such games.

I find the endless variety of subjects covered by board games very interesting, though they very often use the same playing methods. They can tell you a lot about society in the era in which they emerged (or, indeed, about the feelings of the inventor).

There is a ECLA or EC class for the idea of war games, A63F3/00D, which can be used on the free http://ep.espacenet.com database. I had a quick look to see if other countries had produced patented board games based on the war.

Easily the most interesting was Georges Gardes' Jeu de la Liberation, which he filed for in October 1944, a few months after the French Patent Office ceased to be supervised by the Germans. This patent includes a large illustration of a major part of the board, showing Germany with a swastika in the middle; each corner being for France, Russia, the United States and Britain; and paths between them of the names of cities on the way to Germany.

Other French patents of interest were one from 1942 based on warfare in the Mediterranean and one from 1943 based on a campaign through Italy, and a more explicit one about invading France from England, filed in 1945 which is described as an embarkation game.

Oddly, I couldn't find a similar British one, and for the USA only the rather prescient World War Game filed for in December 1938, which shows Japan, Germany, the United States and Russia in each corner.

Of course, published patents are no proof that the invention was ever produced, and many were no doubt produced without patent protection (or, perhaps, fall into other classifications). Best of all is to find an old game with a patent number so that you can see the inventor's thoughts spelt out.

PureText does it for me

For me, one of the greatest benefits of computers is their ability to copy and paste content from a wide range of sources (particularly web pages) into one document.

However advantage this is almost entirely negated by the amount of faffing around required to get the text all in the same format.

Luckily, I discovered the wonders of Steve Millerās PureText. This simple and free application must have saved me tens of thousands of key-strokes over the years, as well as significantly reducing the frustration of trying to achieve something which should have been straightforward in the first place. 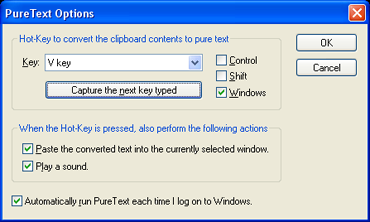 A revolutionary answer to email stress

According to the Daily Telegraph on Tuesday One in three workers suffers from āemail stressā.

Having just returned to 150 āproperā emails (i.e. not spam or quickly deleted ccād messages) after a few days out of the office I can empathise.

The researchers conclusions are backed up by my anecdotal evidence of  most of my fellow commuters and numerous overheard conversations on trains and buses.

The general consensus is that this is an inevitable downside of using email to communicate at work.

However not all would agree and Timothy Ferriss, for one, outlines a revolutionary solution to this modern day curse.  In typical American bravado his manifesto on the ChangeThis website is titled, The Low-Information Diet: How to Eliminate E-Mail Overload & Triple Productivity in 24 Hours.

However for anyone brave enough to follow it through (and I have to confess I am not yet) I think it could be an effective answer.

Every work day I pick up a copy of the free Metro newspaper at my local tube station. Today (page 8) there was an intriguing article: "'Dangerous' bandit is out of arm's way".

It was about a Japanese arm-wrestling machine that had broken the arms of three people who had a go at wrestling it. Apparently the Arm Spirit, available through Atlus, is only available in Japan. I had never heard of the idea, and thought I'd have a look for it.

It's not on the Esp@cenet database, at least under their name, but I did identify some patents for similar machines. There were 17 hits when I simply asked for "arm wrestling" together with machine. There is even an "ECLA" (or EC) classification for the idea: A63B23/12W, which can be used on the site to find 50 patent specifications for the concept. These include a British patent for "Arm-wrestling apparatus". Searching by using classification or keywords is full of problems for the unwary, and rather than experimenting it is best to use the Get Assistance tutorial at that site, or to attend a free patent searching workshop here in London run by the British Library.

On a smaller scale, there is an intriguing thumb wrestling patent where the thumbs fight it out in a miniature boxing ring. Last night I was watching a documentary about the development of the Spitfire. The narrator happened to mention that a film (or movie, if you prefer) had been made about the life of its designer.

I wondered how many real inventors, or inventions, were the subject of motion pictures (as opposed to documentaries). I've come up with a little list, given below. I'd be interested to hear of other candidates. I am aware that if I extended the list to imaginary inventions or inventors the list would be a lot longer: maybe I'll do that for another posting. Or maybe not -- there are vast numbers of them, most of them depicted them as eccentrics.

The First of the Few (1942). Leslie Howard as Reginald Mitchell, designer of the Spitfire (not patented, as far as I know).

The Great Moment (1944). Don Ameche as Dr William Morton, who controversially patented ether as US 4848.

The Dam Busters (1954). Michael Redgrave as Barnes Wallis, inventor of the "bouncing bomb" used to attack dams in the Ruhr in 1943.

Carbine Williams (1962). James Stewart as David Marshall Williams, a prisoner who worked on the M-1 carbine.

Tucker, the Man and his Dream (1988). Jeff Bridges as Preston Tucker, who innovated a safe car with inventions such as this one.

Lorenzo's oil (1992). Nick Nolte as Augusto Odone, who searched for a cure for his son Lorenzo, who suffered from adrenoleukodystrophy. Croda International went on to patent US5331009.

The Man who saved Christmas (2002). A.C. Gilbert, US toy manufacturer and inventor, played by Jason Alexander, prevents toy manufacturing being banned because of wartime restrictions in 1918. A true story.

"Designs" is the term used in the IP world for the look of something, as opposed to how it functions. Traditionally it's been a bit of a Cinderella in the searching world: not surprising when there's little text to search, and most searchers use strategies involving words. But they are important: think of all the gadgets that attract by their looks as much as by how they work.

We are now offering free access to a new database in our Business & IP reading room, DesignFinder. The subscription allows three authorities to be searched at once: British, Community (for the EU), and another international system, the Hague Agreement. You can search by title or company name, and also by the Locarno classification. The results are lots of images which can be clicked on for more.

Named for the town where they thought it up, Locarno offers broad concepts like 01/01, bakery products, and 25/01, building products. Often they are far too broad: 14/02 is for the huge area of data processing equipment and peripherals.

To help with that, the British national database offers a third layer (if 14 is the first and 02 the second). Hence, there is 14/02/02 for computer input devices, including mice and joysticks. The database has 235 images of designs for that class, instead of over 4000 for just 14/02. This extra layer cannot be searched for on DesignFinder, unfortunately. On the other hand, the British database cannot be searched by the titles of the designs, but they can be on DesignFinder.

The other databases that DesignFinder covers are the Community and the Hague Agreement (which is searched in the format 14-02, and is mainly continental companies).

The British Library also subscribes to a version which adds the USA, France, Germany and Spain. This can be searched for clients through our priced Research Service. To make things more interesting, the USA does not use Locarno, but rather their own design classification. Don't let anyone ever tell you that searching for IP rights is easy.

Beside wondering why I never see such a list for English inventors (I've seen lots for the Scots, Americans, etc.), I pondered what was on the list. Ranked as no. 1 was insulin, which was really a discovery, but certainly very important.

I was surprised to find Swedish-American Gideon Sundback (the zipper) on the list, which had a strong bias towards winter sports, and the coat hanger by Ontario-born Albert Parkhouse was omitted, among others. That invention is probably more useful than, dare I say it, instant replays.

One invention that I had not thought about before was new to me was alkaline long-lasting batteries. They went into production from 1959. Don't they sound boring ? Yet many a power-hungry device could not work without them. As the list does not cite any patents, it took me 10 minutes on Google to find a mention of the patent for it.

Apparently Lewis Urry persuaded his bosses that he had something useful when he had two toy cars, one with his new battery, one with a standard one, racing each other along the floor. His leaped forward, while the other barely moved. It's that sort of story that for me brings the world of inventions vividly to life.

I count myself as a fan of the Harry Potter series (yes, I know the ending of the final one) and, out of intellectual curiosity, have looked for evidence of the saga in the patents. Mattel has bought the rights to board games and the like and has produced many games based on the books. Jeannie Burns and Jonathan Bedford are their main inventors, and both utility patents and design patents (the American terms respectively for inventions and for registered designs, the look rather than how something works) have flowed from them ā with titles like Animated photographs, Levitating ball toy, Interactive dark ride and Game with multiple chambers.

One such opens like a book and its title is Game with multi-level game board, an awkward attempt at simulating the play of Quidditch. 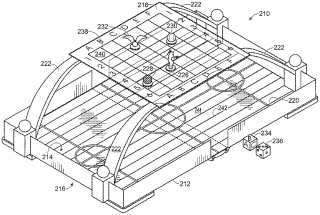 Then thereās a game based on Diagon Alley where you have to beat the other players to buy from the different shops what you need for Hogwarts: wand, robes, owl, cauldron, and so on, with the winner the first to get the set. 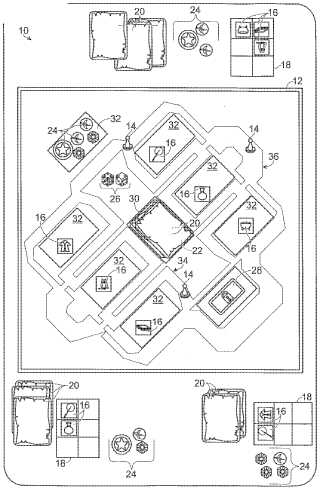 This sort of light-hearted research is highly addictive and just the right thing for a wet day, using the free Esp@cenet database.