The Boots Centre for Innovation wants your ideas

One of the most interesting speakers at The British International Innovation & Technology Conference and Exhibition was from the The Boots Centre for Innovation. It was good to hear that an organisation as large and bureaucratic as Boots is prepared to do something radical in order to foster innovation.

They recognised that getting new ideas from inside the company was not the most effective way to deliver new products to the market. So they teamed up with the Institute of Life Science at Swansea University, the Welsh Assembly and Longbow Capital to build a new centre based in Swansea ,investing Ā£3 million of Boots money.

They can provide support and funding for the development of innovative products and technologies. But are particularly looking for new ideas for products in the following ten areas:

1 Improve and maintain the health, look and feel of skin
2 Improve the health and appearance of teeth and gums
3 Devices that enable people to monitor key aspects of their health
4 Improve the health, appearance and comfort of eyes
5 Improve digestive health, particularly issues related to stress, poor diet and obesity
6 Minimise the severity and duration of pain
7 Improve quality of sleep for everyone [including pregnant women, babies and the elderly]
8 Minimise the complications of living with diabetes
9 Anti-ageing products and devices for mind and body
10 Create more convenient methods of taking and using medicines and health products

Posted by Innovation and Enterprise blog editor at 11:37 PM

This is the rather remarkable claim from Edward van Noord, another of the exhibitors at The British International Innovation & Technology Conference and Exhibition. He has patented a way of attaching a very compact hose pipe to a normal household cold water tap. This is yet another case of what I would consider to be a really obvious solution to a problem which Iām sure many of you would already have thought about (I know I have).

Amazingly the particular solution Edward van Noord came up with hadnāt already been patented. Even more impressive is the way he has developed both the product and marketing all on his own. He had even paid for the stand at the show out of his own money.

The good news is that his perseverance (an essential component for any entrepreneur) is now being rewarded with sales increasing across Europe at a rapid rate.

The product is called 1-2-3 stop fire  and you can see what you think of it below.

Posted by Innovation and Enterprise blog editor at 11:27 PM

The judging panel will be looking for clever creations that could revolutionise the future of energy and how it used.

The closing date is 30 November so you will have to get your skates on and apply at www.eon-energylab.co.uk if you want to enter.

If you are in need of inspiration the site offers some suggestions for āgeneratingā ideas:

"If you are finding it a challenge to get started, weāve put together a simple approach that may help you generate some great ideas. Try using the following steps either on your own or with friends:
1. Define the problem

* So what problem do you want to solve?
* Is it in your home, school or office?
* Is it a problem that has been around for a long time?
* Generate a list of āproblemā topics

* The idea here is to generate as many ideas as possible. Remember there are no ādumb ideasā ā they all count at this stage
* Set yourself a period of time to think ā say 30 minutes
* Create a topic and stick to it (use your list of topics from step 1)
* Realise your ideas in words, pictures and anything that helps you describe your ideas ā be creative!

* How have inventors approached similar problems in the past?
* If itās a good idea it may have been done before ā itās worth checking before you enter
* How could existing inventions be improved?
* Are there parallel problems or solutions that you can draw inspiration from?

4. Start to define your solution / invention

* Try focusing of 2-3 ideas that you think have a chance of solving the problem you have set yourself
* Write down the pros and cons of each one
* Can you draw on ideas from previous inventions?

So now you are really inventing! Youāve picked your topic, generated ideas, narrowed these down to a short list and shortly youāll have your preferred idea. Just keep asking questions of your invention and try and have an answer for everything."

Posted by Innovation and Enterprise blog editor at 11:16 PM

As well as being the main contact for Prime Thinkers, Maurice Collins is also the man behind a collection of over 800 quirky gadgets and contraptions from 1851 to 1951. The collection contains some of the most eccentric labour saving devices, many from the Victorian era which is renowned for its Heath Robinson style excesses. Examples include a clockwork teas-made from 1902, a system for smoking 2 cigarettes simultaneously, a portable moustache protector for eating soup in polite company.

The collection does not currently have a permanent home but selections are available for hire, and I am hoping we can show off a few items in the Business & IP Centre soon, so watch this space.
Maurice has published two books featuring his collection: 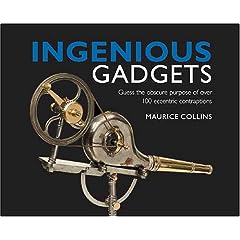 You can read more about them on Amazon.co.uk

Posted by Innovation and Enterprise blog editor at 11:06 PM

At the recent The British International Innovation & Technology Conference and Exhibition at Alexandra Palace I came across a stand for Prime Thinkers. They are a group of 20 experienced business owners, managers in large corporations, academics and senior government officials, many of whom have now retired. The idea is that someone with a business idea or invention presents to and participates in a brainstorming session with a group of 8 or 10 of the Prime Thinkers team.

Together they will spend an hour focussed on solving anything from brand names, raising finance, finding customers, sourcing manufacturers and anything else relevant to the business idea.

The cost is Ā£75 per session, but with all of the money going directly to the charity Kith and Kids.

Posted by Innovation and Enterprise blog editor at 10:49 PM

On Friday evening I attended the European Federation of Black Women Business Owners - Black Women in Business Awards 2007. It was a fun event, but made more enjoyable because the Business & IP Centre won the Corporate Award award.

The award was in recognition of our help and support for support both women and ethnic minority groups in the sphere of business such as our Inspiring Entrepreneurs event Winners 1: The Rise and Rise of Black British Entrepreneurs (in association with The Black Enterprise Awards) held in May 2006.

Posted by Innovation and Enterprise blog editor at 10:30 PM

Well, it's that time of the year again. The 31st of October, when British householders either are out of the house or pretend not to be in when the doorbell rings -- which, unlike in the USA, may be not at all or a few times an evening. That's the problem of a not very well established custom.

As for any festival there are a number of Halloween-related patents. These include an Illuminated Halloween Costume. The motivation behind the invention was to promote safety on dark evenings. Then there is the Decorative Electronic Lighting for Halloween Pumpkin (illustrated) 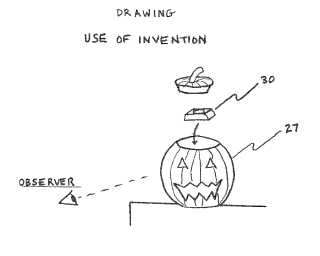 which uses LEDs instead of candles for safety and convenience. Safety is the message in many of these Halloween inventions.

Particularly interesting in this context is US 5735548, a Food Donator Identification Container. 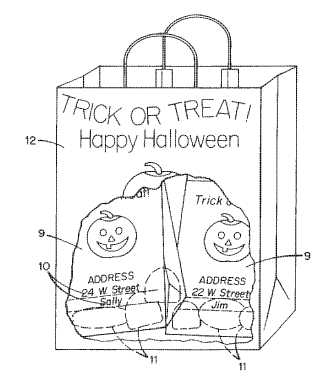 I recall that in my American childhood, every Halloween without a thought I happily put into my bag sweets from strangers, and then read that someone had been arrested for handing out apples with inserted nails. This 1994 invention is meant to put a stop to such possible dangers. The inventor talks of using X-ray machines in hospitals but felt that this was expensive, did not help with tainted candy, laid hospitals open to liability suits and did not identify the guilty parties.

Her solution was that the donors would write their name and address on special bags when they were handed over. One wonders how many children collecting, let alone grownups handing sweets out, would comply with the invention. All too often inventors do not think through their inventions. Will consumers  really be willing to go the extra mile? And if they are, would psychopaths do the same ? Just because the invention is clever does not mean that it is practical in everyday use, or will be needed. The manufacturer or banker on the other end of the desk is not interested in how clever something is, only if it will make a profit.

I'm just back from a holiday to find that I'm attending tonight a function here at the British Library . It's called Winners 2: the Rise and Rise of Black British Entrepreneurs. It's part of our continuing support for business.

Most of the information on the Web or in books on black inventors is American in origin. This site is a good starting point. In the UK there is certainly plenty of activity from Asian or Afro-Caribbean inventors. I have given talks at inventors' clubs and (like my colleagues Peter and Maria) regularly give free workshops here on patent searching, and the evidence is there, admittedly from a London audience.

If anyone is interested in recording patented inventions by Afro-Carribean inventors the patents would not help, as they record addresses and names only. In 1900 Henry Baker, an examiner at the US Patent and Trademark Office, carried out a survey asking for infomation on relevant patents. I have heard that he also marked in-coming patent applications with his own code for later analysis (but how did he know ?).

It's a fascinating area in which to research the history of technology. Rather easier is identifying early patent applications by Japanese citizens in the USA, which can -- with a lot of effort -- be identified on the Google patent web site. Try "emperor" and "Japan" for example.