Apple is protecting your hearing in MP3 players

I noticed mentions of an invention by Apple in two newspapers published on Christmas Eve.

I first noticed it in the Daily Telegraph. Apple had published details of an invention which turned the sound down after an interval, so as to protect your hearing.

This is the Portable Audio Device Providing Automated Control of Audio Volume Parameters for Hearing Protection -- a long but useful title. The document includes drawings showing the principles behind the software. It follows heavy criticism by charities and others of the impact that MP3 players (and personal stereos ?) have on hearing if the volume is too high.

There was also an item in the Daily Mail, which referred to the "new patent". No, it's not a patent. It was only published in June 2007 (so why all the publicity on Christmas Eve ?) and is awaiting the grant of a patent, a very different thing. There's also the matter of where a patent is granted, as no worldwide patents exist. It is awaiting grant in Europe, Japan, China and Canada as well as in the USA. They, and not an application, give the actual scope of the allowed monopoly.

Personally, I think it would be easier if the devices were adjusted so the volume couldn't be turned so high in the first place.

Secrets of a successful entrepreneurs

I have been listening to yet another thought provoking show from Peter Day. This time it is from his GlobalBiz show on the BBC World Service.

He was visiting the BridgeClimb experience in Sydney, Australia, and talking to its founder Paul Cave.

He talked frankly about the importance of customer complaints to his business and how he aims to continuously improve and grow their service. One of his biggest challenges was to change staff attitudes so that when they receive a criticism or a suggestion, it is seen as a positive thing. He wants them to celebrate when they get feed back of a negative nature, because this allows them to work out how to change and improve their service to address those comments.

Most business take a lot longer, the pockets need to be deeper than expected, and you need to be very very resilient. You have got to have an enormous determination, an obstinacy to proceed in order to make a business happen.

Also the subject is best taught by ŌĆśpracademicsŌĆÖ, and that some of our best entrepreneurs are not polluted by education. Many of our professions, particularly law and finance are about reasons ŌĆśwhy notŌĆÖ.

Finally, entrepreneurs have the ability to see around a corner, when there isnŌĆÖt a physical way of doing so. They sense what is there in a way that many of us are unable to do.

Posted by Innovation and Enterprise blog editor at 8:39 PM

One thing I have learnt from my exposure to the subject of copyright since joining the British Library is to quote an expert, ŌĆ£itŌĆÖs complicatedŌĆØ.

Which makes me wonder how the Eqyptians plan to implement this new international law.

According to the BBC news website, EgyptŌĆÖs MPs are expected to pass a law requiring royalties be paid whenever copies are made of museum pieces or ancient monuments such as the pyramids.

Zahi Hawass, who chairs EgyptŌĆÖs Supreme Council of Antiquities, told the BBC the law would apply in all countries.

Posted by Innovation and Enterprise blog editor at 8:38 PM

On Saturday I was fortunate enough to be able to attend what is considered to be the local derby of Arsenal vs. Tottenham Hotspur at the shiny new Emirates Stadium. After a slow start it turned into a very entertaining match for the 60,000 fans of both teams. Just after half time Arsenal scored the first goal of the match and the whole stadium erupted, to the extent that I could feel the stand shaking beneath my feet. Such a visceral experience came as a surprise.

On the way home through the new St Pancras station I was musing on the continued popularity of live entertainments, both sporting and music, when my thoughts were rudely interrupted. It was the screeching sound of Punch emanating from a Victorian style booth, surrounded by an entranced crowd of children and parents.

Here was another example of old technology (according to Wikipedia, Punch and Judy date back to the 16 century) still being popular with todayŌĆÖs generation of internet and video consumers.

Posted by Innovation and Enterprise blog editor at 6:52 PM

I've just discovered the power of the Google Book Search for getting quite specific information from within books.

This is partly from the project of scanning lots of books and journals, where you normally can see the relevant page, and partly from limited access information, where you normally don't. The site is now available as a beta version. I will use it for tracing advertisements in directories and so on. Using words like patentee or inventor together with names or occupations to limit the results still results in lots of unwanted "noise" (as the site does not allow for "proximity operators" such as within the same sentence or within 5 words) but may still be invaluable.

I also found that the site houses the text of many annual supplements to the 1617-1852 Chronological Index of Patents of Invention such as the 1856 volume. These are for the 1850s and 1860s. You can search within that volume by place, occupation or title word, as well as by name. To seach all of them, it looks by using e.g. "Chronological Index" and "patents" in the search engine, rather unwieldy. And it would be good to have the 1617-1852 volume itself included.

As ever, be cautious in making conclusions based on what you fail to find.

Canada has recently added data back to 1861 in its Industrial Designs Database. This means that images of designs can be searched for by name of applicant or title. The latter enriches greatly the ability to search for Victoriana and the like.

You can also browse through the Canadian design classification. This gave me 733-21 as the class for hockey game boards. Asking for this class gave me 21 designs: I expected more.

The results give small images of the design, and you can click for more information. I am aware that American design patents have been scanned but such databases are unwieldy to use -- useful as it is, the Google database does not allow design patents only to be searched for.

The British equivalent are kept in the National Archives. They are very numerous and are kept in immense volumes, sometimes with samples of fabric and the like pinned to the page. Scanning it would be wonderful but also very difficult, and indexing data would be added to make it more than a browsing tool. There is a leaflet about their holdings.

Santa is on his way

Well, Christmas is almost upon us and I've had a look for Santa-related inventions.

When I came across the Motion-Responsive Illuminated Stocking I assumed that it was the kind of stocking you hung by the fireplace, warning the sleeping tots when Santa Claus -- or was it Dad -- inserted the stocking fillers (MP3 players and the like, these days, hardly the simple fillers of old). Wrong sort of stocking -- the idea is that the wearer's ankles flash while walking along. Here is the main drawing. 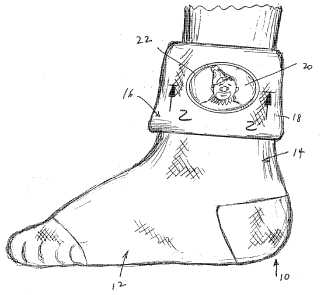 There is, however, indeed a patented Santa Claus Detector. It makes fun reading, as the inventor clearly believes in Miracle on 34th Street and the like. The idea is that a cord is pulled across the fireplace so that a tug will light up the stocking courtesy of a light-emitting diode. If pulled in secrecy by a grownup, the children are meant to think that Santa set off the trap when visiting. Ahhhhh.

An interesting list of Whimsical Christmas Design Patents is available to browse through, all of them American as well, while there is a book that came out in 2005 that clearly passed me by at the time.

The book is Patently Christmas, a book by Richard Ross exploring in detail patents on elves, snowmen and the like. Ross has been active: there are other books by him on specialist patent interests. But not yet, I think, on hangover remedies, for which numerous dull patents prescribe novel compositions to imbibe.

Season's greetings to you all.

I've just finished reading Duncan Bannatyne's autobiography, Anyone can do it. It makes the world of business seem very easy: just a few calculations on the back of an envelope, apparently.

Duncan is known to many as the Scottish dragon on Dragons' Den. Inventors or entrepreneurs deliver sales pitches asking for money in return for a share of the equity in the business. I'd noticed how he is a man of few words, obviously good at maths (unlike, sadly, some of those doing the asking), and skeptical about many inventions. At least, he does seem prone to bury head in hands when hearing some pitches, bragging perhaps about huge sales projections.

His own background is in services. Instead of the risks of a new product, his career has been in replicating high quality services, which involve dealing with people, where payment was by direct debit, and, preferably,  where there were government guarantees. OK, so ice cream selling doesn't fully fit this model, but the next ventures did: care homes, day care nurseries, and fitness clubs. There were government grants for the first two. He likes a 33% return annually on his investment, and watches the pennies.

I loved his stories about the series. There was cardboard beach furniture, where he asked what happened when it rains. He was told by the inventor (with a look of hatred, he states) that he was stupid, people don't go to the beach in the rain. He persisted: what happened when a child came out of the sea and sat in one of the chairs ? The reply was to keep the child under discipline. As so often, the inventor assumed that the product would only be used in perfect conditions.

She had spent ┬Ż60,000 on intellectual property rights. I believe that this is the Portable article of furniture invention, where lightweight items collapse down to fit in a bag. Here is the main drawing. 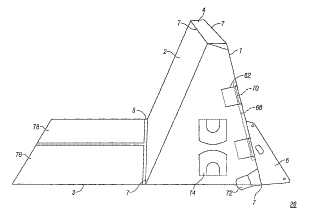 Then there was the Baby Dream Machine, published as a Rocking Device (to nod babies off to sleep), where the 50% of the company that Duncan was offered for ┬Ż200,000 turned out to be 8% of the royalties, as most of the equity had been sold off. Here is the main drawing. 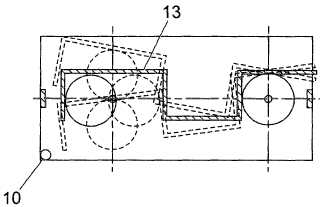 I often ask inventors in talks if they ever watch the programme. About half do: to the other half I say, this is the kind of hard questioning that backers will use. Why should anyone risk their money for a poorly worked out idea ? Think about the motives of the person sitting opposite you.

All in all, a great read.