Explaining different aspects of Web 2.0 presents quite a challenge, so it is great that Sachi and Lee LeFever have created a set of videos to do the job for us.

They aim to make topics such as Twitter and RSS accessible to their ŌĆśmomsŌĆÖ, which is good news for the rest of us. As they say in their About Us section of their website: ŌĆ£We are two passionate people and Common Craft is our company. Our product is explanation.ŌĆØ

Here is their ŌĆśWikis in Plain EnglishŌĆś to give you a flavour.

P.S. The reason for the quotes in the title is of course because the Plain English is in fact Plain American via Seattle, Washington State, U.S.A.

Posted by Innovation and Enterprise blog editor at 11:49 PM

My April contribution to the Ideas21 website has already appeared, The Electronic Supermarket Trolley.

This is one of a series of stories I have written about important or just interesting patented inventions. Ideas21 acts to encourage innovators with talks and networking in London and Manchester, as well as with its growing website.

Below is the main drawing from the invention, where a "smart" supermarket trolley/ cart holds a dialogue with the goods housed there. 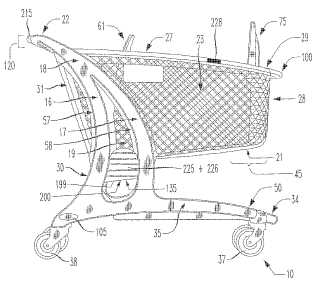 Today's free Metro newspaper had an item about a "bizarre green gadget", where a washing machine is mounted above a toilet. The water used by the washing machine gets used again when the toilet is flushed.

I'm not sure why the story, which shows a picture of the invention, calls the concept bizarre. Maybe it isn't really worth the effort, but reusing water sounds a good idea to me.

I suspect that the invention is actually Hungarian Pal ├¢kr├ČsŌĆÖ Electronic Greywater Reusing Washing Machine patent specification. It has an interesting main picture, given below.

More fruitful, perhaps, in saving water would be to use recycled water from washbasins in public toilets. My father told me some thirty years ago after a business trip to Japan that he saw there the idea of water used in washbasins then being used in the cisterns to flush the toilets. 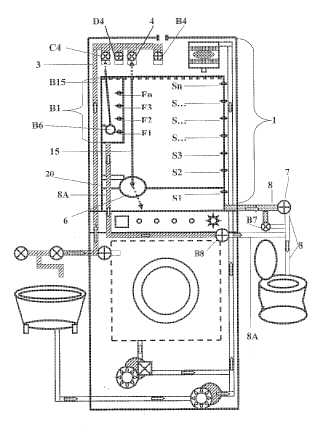 The other day I was watching the 1976 film Midway on TV when, in the closing credits, I saw SENSURROUNDŌäó PATENT PENDING.

Fans of this site will know that that sort of thing is a challenge I can't resist, and it did not take long to track down the relevant patent, Special effects generation and control system for motion pictures. Here is its main illustration. I was only vaguely aware of the technology. Special equipment was built into the perimeter of the cinema to convey high intensity, very low frequency random noise so that the audience would feel sensations such as earthquakes. In the case of Midway, explosions, I imagine.

The system was first used in, appropriately enough, Earthquake (1974). It was one of the top films of the year, but there was a problem which the applicant, MCA Systems, had not anticipated. Multiplexes were becoming popular, and the frequent juxtaposition of showing Earthquake next to The Godfather, Part II meant that those who wanted to watch mafiosi quietly snarling at each other were troubled by low rumblings from next door. Not surprisingly they complained in large numbers.

There was also structural damage in some cinemas. A test screening at Mann's Chinese Theater in Hollywood cracked the ceiling, so a safety net was installed -- very reassuring for the audiences, no doubt. In Germany films made with the process could only be shown in single screen cinemas. In Chicago, the head of the city's Building and Safety Department demanded that the system be turned down or removed to avoid structural damage.

Together with the cost of installing the equipment, and the $500 weekly fee to Universal for using the system, it simply wasn't worth the hassle, and not surprisingly Sensurround was only used in five films. The concept simply hadn't been thought through enough.

Mothers of Invention III kicked of with Jessica Huie, who at 17 years old discovered she was pregnant. Her father not happy, telling her that ŌĆ£you will only ever be a statisticŌĆØ. This made a deep impression on Jessica and her subsequent successes are her way of showing him he was wrong.

She combined motherhood, college, work experience and a weekend job at a shoe shop, as well as working initially for free, at Pride magazine, local radio and publicist Max Clifford.

While searching for a card for daughter, she realised that there was nothing available with images of black or Asian people. In traditional entrepreneur style, rather than simply complaining, she started a company, and now her Colorblind Cards are spreading rapidly across the UK and soon to appear in the United States.

Sian Sutherland told her story of how she went from promoting other companies skincare products to developing her own Mama Mio range. Her main piece of advice was to ensure you have a business plan as it helps to focus on what makes your business different from your competitors.

Lorraine Heggessey, former controller of BBC1 and now CEO of Talkback Thames, surprised us when she exclaimed that in business, ŌĆ£everyone is bluffing.ŌĆØ And that historically men have been better at this then women.

Debbie Reynolds, founder of the School for Sign Language was for me the most engaging speaker with an amazingly frank honesty about her lack of business knowledge prior to starting out. However with a grant of just ┬Ż1,600 she has gone on to reach a turnover of ┬Ż170,000, employ 28 deaf and hearing workers and volunteersŌĆÖ, and won several awards in just a couple of years.

Sam Roddick, the daughter of Body Shop founder and supporter of the Business & IP Centre, Dame Anita Roddick, maintained the family tradition of being thought provoking, provocative and shocking. Describing herself as an activist, she aims to change peoples view on sexuality and eroticism.

She described her route to commercial success as initially a ŌĆ£fuck-upŌĆØ, but the important point was that she learnt from these early mistakes. In particular stocking around 1,000 items, most of which were either one-off creations or short run products from creatives.

Posted by Innovation and Enterprise blog editor at 1:04 AM

I have had a great interest in presentations, the good, the bad and the ugly, for many years now.

This is partly a result of having to overcome a phobia of public speaking. I know you are going to say that no one enjoys standing in front of an audience. And that many people have trouble sleeping the night before, and some are even physically sick before going on stage. However my fear of presenting used to take the form of insomnia and panic attacks beginning up to four months before, and building up as the big day approached.

Also, fairly early in my career, my job including producing and presentations for senior managers within my company. I remember spending much time reducing overly numerous and wordy sets of slides down to something digestible and attractive, only have the managers revert to their original slides minutes before the presentation. One classic example involved our Economist who was asked to present on the tricky topic of Stock Futures and Options to our trustees. As I watched him lose his audience due to his ŌĆśkillerŌĆÖ slides I wanted to to ask him if he had ever wondered why he was being asked to present on this topic for the third year in a row to the same audience.

I also remember attending a conference in which the speaker tried, and failed, to get through 120 detailed slides in 45 minutes. It was an incredibly stressful experience as an observer, and goodness knows what it was like for the presenter.

Yesterday I attended a one day training course aimed at improving the presentation skills of the Business & IP Centre team, and wanted to pass on a few key learnings from the day:

1. Engage your audience - and in order to do so you need to understand who they are, what they want and what you want to communicate to them. DonŌĆÖt just churn out the same presentation each time. Tailor it to each audience.

3. Keep you audienceŌĆÖs attention throughout using: the power of the pause (the longer the

4. Get rid of all of your PowerPoint slides that donŌĆÖt explain or illustrate a point. How many times have you seen presenters simply reading their bullet points out?

For more details on this point have a look at this presentation on SlideShare.net

Posted by Innovation and Enterprise blog editor at 8:42 PM

The British government published yesterday its Innovation Nation white paper. The power of Government spending must be harnessed to create demand for new innovative products and services, says the press release.

There is a lot of interesting data and comments in it. I checked for mentions of patents, and found the statement "The UK exhibits low levels of R&D and patenting, although this may be partly due to industrial structures" (page 19). In my opinion, a low level of technical skills and a short-term approach to investment with a desire for a quick return are relevant factors.

There was also the statement "Measures of patent applications per head of population for the UK are lower than for major competitors" (page 32). This is true, and we are falling behind. I have compiled figures based on the number of patent applications by residents made through the international PCT route, which is used by nearly all big companies and many medium sized ones to request protection (the so-called "world patent", which it isn't).

Instead of measuring the actual numbers, I measured the rise or fall in national "market share" using the route. Major countries were measured on the basis of how they have performed since 1991. A score below 100 means that their share has fallen, while a rise means that they are improving. A fall would be expected as countries like Korea and China have been making many applications in recent years.

In 1991 the UK had more than twice as many applications as the French. In 2003 they overtook us. But we are still ahead of the Italians -- for the moment. Britain is sixth in actual numbers, as Korea has also overtaken the UK. Their number of filings in 2006 rose 26% over 2005, while China rose by an extraordinary 56% (but from a low base). And all this only reflects a desire to patent, not actual allowed patents.

Although much British activity in intellectual property is in fields that are not normally patentable in Europe (copyright and music, for example), it is sobering to see cold figures of this sort.

Are you Desperately Seeking Finance?

A recurring theme when talking to early stage entrepreneurs is where are they going to get finance from.

In order to help address this problem we are devoting our next Inspiring Entrepreneurs event to this topic.

If youŌĆÖre running, or about to launch, your own business, the we are offering a unique opportunity to pitch your idea to a panel of financial experts, including former ŌĆ£DragonŌĆØ Doug Richard.

Desperately Seeking Finance is a panel debate and discussion dedicated to the secrets of raising finance. As part of the evening, three entrepreneurs will present their business idea.

To qualify please send a 200 word summary of your business idea, including key financial projections, to bipcworkshops@bl.uk.

The deadline for submitting your plans is 25 March 2008, and those selected will be contacted the following week and asked to prepare a two minute presentation for the evening of 22 April.

Posted by Innovation and Enterprise blog editor at 9:10 PM