Walking in London is the quickest route to health

As a keen London walker I was disappointed to have missed Walk to Work Day last week. However with spate of good weather recently I have been walking my full morning route from London Bridge to St Pancras every day. 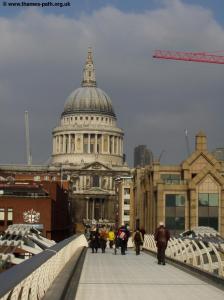 I am lucky that my journey takes me along the Thames past the Golden Hinde, Clink Prison museum and Shakespeare‚Äôs Globe Theatre. I then stroll over the Millennium bridge with the best view in London as I approach St Paul‚Äôs Cathedral.

I have often suspected that it is often quicker to walk than to go by underground, and this has been confirmed by the BBC website. In central London there are 109 journeys between Tube stations that are quicker to walk (taking into account time spent waiting for trains).

Posted by Innovation and Enterprise blog editor at 12:31 AM

I‚Äôve blogged before about objects with patent, design or trade mark information on them. Examples are windup torches, teabag packaging and stair carpet clamps. Here‚Äôs another, rather mundane one.

I‚Äôve had this hot water bottle for many years. The rubber is perished and it is certainly not ‚Äúfit for use‚Äù. It was purchased in about the mid 1980s. What‚Äôs interesting about it is that the information on it seems to have been added to and nothing ever seems to have been removed.

This is what is on it:

PATENTED IN THE PRINCIPAL COUNTRIES OF THE WORLD

On the actual stopper is given: SUBA-SEAL PRESS FIRMLY PAT. N. 494514 The philosophy in finding further information about industrial objects is to see if you can step from one piece of information to another. I decided in this case to see if the trade mark would enable me to identify the manufacturer.

Suba is listed as an expired mark on the official UK database. A Barnsley company, William Freeman Limited, filed for it in 1962, and it expired in 2007. It is for, among other things, hot water bottles.

I then went onto the Companies House database, which stated that the company was founded in 1962 and gave as its status ‚Äúadministrative receiver‚Äù. This means that someone was appointed with that title to oversee the company‚Äôs assets after a creditor tried to obtain payment of a debt. It was listed as a manufacturer of rubber and plastic products.

Turning to the patents, I looked them up on Espacenet. They were published between 1937 and 1942. GB 470720 is the earliest, and is titled "Stopper for bottles, jars and the like". The applicant was William Simon Freeman who was said to be formerly Simon Freedman, British subject, of a Leeds address. This, surely, is the origin of the company. All the other patents give Freeman as the applicant. As the law stood at the time, it is possible that Freeman was not the actual inventor, and had instead hired someone to invent the product. The banal subject of the stopper is that of all the patents. There are other patents listed for Freeman: as late as 1969 he was busy filing away on the same subject (together with the company).

As for design 937892, there is no index or sequence by number or applicant (other than in the National Archives, where the design itself is housed), but it would date from about 1968.

More is available on the company if you look on Google, and, quite possibly, in the official London Gazette. Yet the company name would not have been known without following up these clues.

Harrods, the famous London department store, is hosting an exhibition and events until the 24 May about Design Icons.

Ross Lovegrove, who was in the team that designed the Sony Walkman¬Æ, talks in today's Metro free newspaper about seven of his favourite design icons. I liked his comment about mobile phones. He occasionally gets asked to design one, but says "it doesn't get any better than the iPhone. Why would I suddenly do something with buttons on it ?" The personal stereo, by the way, wasn't patented by Sony as they assumed (wrongly) it was an unpatentable idea.

Next Wednesday the paper will feature a similar article by Richard Sapper, who created the ThinkPad¬Æ.

The obituary of Peter Hobbs has appeared in the Daily Telegraph. He was the marketing man in the famous Russell Hobbs company.

It was William Russell who came up with the first electric kettle which automatically switched off, back in 1952. Earlier kettles simply boiled dry if not attended to. The patent was titled Improvements in or relating to electrically-heated containers for beverages. Here is its main drawing. 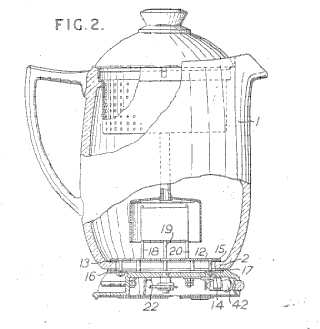 The story explains about the various models, numbered from K1 onwards. They were attractive to look at, were made out of copper and chrome, and had good lines. These "stand alone" kettles were eventually replaced by the cordless "jug kettle", which sits on a base connected to the mains, and which was originally meant to assist the elderly.

This dates back to 1986, by D.H. Haden Limited, and is also British. Its title is An appliance supported in electrical contact with a support. Here is its main drawing. 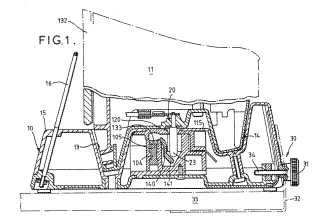 The BBC website has a story about Samuel (Sam) Houghton, who aged 5 has received a British patent for his invention. He must be one of the youngest inventors ever, and thought of the idea when aged 3.

It is for A sweeping device with two heads. He was inspired by his idea of a broom which has one head for big pieces and a second head for smaller pieces by watching his father sweeping up in the garden. Dad, who luckily is a patent lawyer, says "It was such a simple solution that only a child could have come up with it." Here is the main drawing. 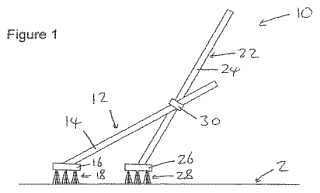 There are no plans to market the broom, but the fact that the patent has been granted protection (the BBC story has a picture of a smiling Sam holding a copy of the published, granted patent) means no one else can try to monopolise the idea. He has his own website.

As far as I am aware Sam is the youngest inventor to receive a British patent. In the USA, there is Jeanie Low with her Folding step for cabinet doors (built when she was aged 5); Robert Patch, with his Toy truck, who was 6 at the time; and Becky Schroeder, who took out three patents, starting with her Luminescent backing sheet for writing in the dark. Depending on which source you find, she was aged 10, 12 or 14.

Confusion can easily arise, as a child may think of an idea at one age, apply for a patent at a second, and be granted a patent at a third. Other inventions by children are stated by sources on the Web to be collapsible stands for school lockers, edible spoon-shaped crackers for cats, chalk dispensers, nappies with pockets for baby wipes and solar-powered tepees.

I obviously haven't been keeping my eye on the ball as my colleague Rupert Lee had to tell me about the results of the 4th International James Dyson Awards. This is the official site.

There is a story in the Independent about the awards. First prize of ¬£5000 went to Michael Chen with his Reactiv cycling jacket, which uses LEDs sewn in which are linked to the rest of the bicycle so that they are green under speed, and red when there is braking. Additional LEDs shine amber on the arms when turning.

Bikebiz discusses this and other bicycle-related innovations at the awards. I must admit to scepticism about demand for the product, as so many cyclists do not bother to purchase a battery or the lights themselves, trusting to the darkness and luck, I suppose. The pricing will be crucial.

The Bikebiz article mentions that the best selling product to date in the area of lighting up when you wanted to indicate a turn was Simon Goude's "indicator glove", which they state is no longer in production. His Cyclist's glove was applied for in 1996. It is no longer in force as a patent. It relies on the user turning on a switch with the thumb so that LEDs light up the glove. Something that acts automatically is safer, but would probably be more expensive. This is the main drawing. 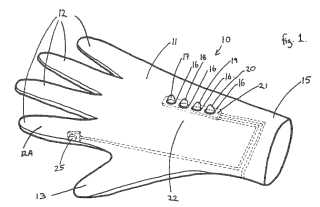 The ball on the new Dyson vacuum cleaner

Recently British television advertisements have shown James Dyson demonstrating how wheels on vacuum cleaners mean that they are hard to steer round corners.

He then shows how his company now use a large ball behind the broad cleaner heads so that upright vacuum cleaners can be steered with ease round corners.

Their Surface treating appliance, published as long ago as February 2004, is mainly for this idea. It is interesting in that the word "ball" is nowhere mentioned. Instead we have "arranged to roll with respect to the main body for allowing the appliance to be rolled along a surface" and the like. Here is the main drawing. 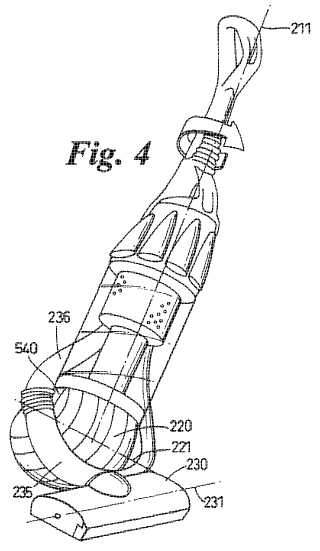 The idea of a huge ball has been around in Dyson's thoughts before. Back in 1975 he applied for a patent for a Ground engaging member for movable structures, which was basically a wheelbarrow with a huge plastic ball at the end rather than the usual narrow, single wheel. The idea was not just that it would be easy to steer, but that it would avoid a heavy wheelbarrow cutting into the soil and making it hard to shift. It was called the Ballbarrow.

The story I heard was that it didn't sell well for several reasons. Most people don't have room for a wheelbarrow; most people only occasionally need one; and most people work their wheelbarrows until they fall apart from rust. And, above all, people tended to borrow the thing from those who had bought it.

Dyson made no such mistake with his dual cyclone vacuum cleaner. Every household needs something to clean the place, and Britain alone has over 20 million households.

After my recent blog post about the rather exclusive location deep below the reading rooms of the British Library, I was surprised to discover this week that Stephen Fry was there before me. He was there as part of a fascinating documentary in which he helps to build a copy of Gutenberg‚Äôs (and the world‚Äôs) first ever printing press. You can still catch this fascinating program via the wonderful BBC iPlayer service.

I love the way he demonstrates the principles of typeset printing using an old John Bull Printing Outfit whilst sitting in the British Library Caf√©. I have fond memories of that game from my early youth.

Posted by Innovation and Enterprise blog editor at 4:29 PM