The TomraÂ® machine for sorting cans, bottles and plastic

This is the last of several postings about inventions new to me that were noticed on my recent trip to the USA.

I was outside a Vermont supermarket when a couple of youths turned up in a pickup with a dozen cardboard boxes stuffed with bottles (mostly beer) and cans. They patiently, and without a word to each other, began to insert the bottles and cans into a single hole in a machine about the size of a large refrigerator. This clearly was sorting cans, glass bottles and plastic into those three categories. Having nothing better to do, I watched for five minutes until the inevitable jam occurred.

They politely asked one of the staff to help. She unlocked a large door which revealed that the compartments were full: "just what I didn't want to see", was her resigned comment. I noticed that there was complicated machinery to do with the sorting.

After they had gone I wandered over to the machine (you can tell there wasn't much doing in sleepy Poultney) and noticed that it was a TomraÂ® 62 model. No patent number given that I could tell.

Tomra Systems is a Norwegian company and their Method and device for identification of a type of material in an object and ulitization thereof is the sort of thing we are talking about. A detector station irradiates articles with infrared rays. As the different objects have different spectral characteristics it can tell which is which in order to sort them. This is the main drawing. 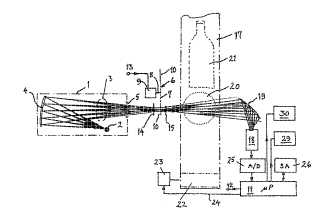 I must admit I wonder if it is really worth the effort: couldn't people just put the things separately into large skips which could be hoisted on vehicles in the first place ? That is what occurs in London. It must also be awkward unlocking and emptying the machines for a smallish amount of material.

Tomra Systems (motto: helping the world recycle) has some 30 patent specifications for methods of handling objects, or reverse vending technology as they like to say.

I see many inventors in the course of my work, and while our discussions are confidential, I can of course freely speak about published inventions.

There are quite a few reasons why the invention may be unsuccessful, not just because it may not be new. Take the Light Bulb Changer by Thomas Magdi of Florida, which was granted patent protection in 2004. 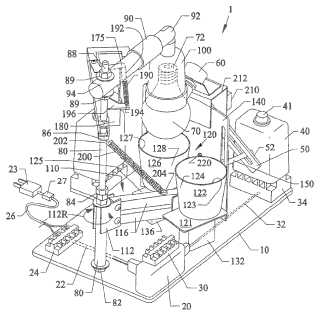 This is an ingenious invention which detects a burnt out bulb, removes it, and then replaces it. The drawing gives an idea of how complex it is.

Magdi says, after reviewing in the specification what he regards as poor efforts to solve the problem of replacing burnt out bulbs, that "the need exists for solutions to the above problems with the prior art". What he has in fact created is an expensive solution that must sit in some way just below every bulb in the house.

As so often, whether an invention is something that people will actually want to buy and use has not been thought out by the inventor -- although the mention in the summary that it could be used as a novelty item has some merit.

As a fan of the Common Craft website which explains tricky Web 2.0 concepts such as Twitter and Web 2.0 itself, I was pleased to see that their latest video covers Google Reader. I have been using Google Reader for several years now as my RSS feed aggregator of choice, and although I am aware it has lots of competitors such as Bloglines and Rojo.com it works for me. [youtube=http://www.youtube.com/watch?v=VSPZ2Uu_X3Y&hl=en&fs=1]

Posted by Innovation and Enterprise blog editor at 3:02 PM

I have already posted about War games from the Boer War , American patriotism patents in World War I and War games from World War II . Two of the inventions given below were in fact by Frenchmen, but they were all published as British patents.

The Improved appliances for playing board games by

Andrew Tait of Rock Ferry, Cheshire, curator and registrar, was applied for in October 1914. It is a strategic game, and Tait suggests that the playing pieces be marked with Union Jacks and the German flag.

The New or improved appliances for playing board games involved playing across a huge map of Europe, marked out in squares. Pieces represented cavalry and so on, and the battle was for both land and strategic assets such as coaling stations. The invention was by Courtney Pollock of London, sculptor.

A puzzle or game appliance was in fact by a Frenchman,

Louis Vial, gentleman. It was a mathematical game where there were 30 numbered spaces (representing a trench) occupied by 15 soldiers of two opposing armies. Vial states "The game is played by mixing up the soldiers and placing them one in each of the divisions of the trench in such a manner that on counting round in nines, starting from number one, and removing the ninth man at each time of counting, there will remain eventually fifteen soldiers of one country only. Only one solution is possible, and the finding of it out constitutes the attractiveness of the game and gives rise to a difficult problem."

The Improved appliances for playing a game involves airships dropping bombs and fighters attacking them -- rather unusual, I think, for 1915. It was by Albert Hunt of London, shipping manager. He states in the specification "Whenever two cards showing bombs or shells bursting or being tired are turned up consecutively, the player who first' calls "bomb-bomb" or " fire-fire " if the cards are both bursting or firing of shells or bombs or " bombfire " or " fire-bomb " if dissimilar cards, will score." Here is the main drawing. 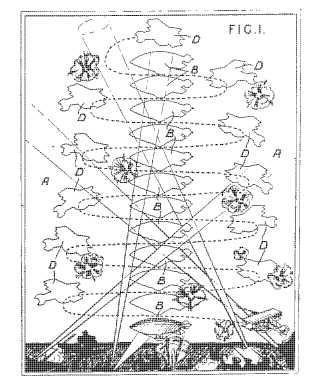 Lastly, there was the Appliances for playing a game imitating trench warfare by  Charles de Laforcade of Paris, Lieutenant 20th Light Infantry. Tanks had appeared by the time the invention was filed (1917), hence their inclusion in the game. De Laforcade states "The game is played by throwing dice into one or the other of the said compartments, as chosen by the player, according as this latter considers it advisable to start an action of a given kind, either a bombardment, curtain fire or barrage, grenade throwing, emission of asphyxiating gases, manoeuvring with tanks, advance or retirement, the numbers given by the dice indicating the number of killed or wounded. Such is in a few words, the principle of the game." Here is the main drawing. 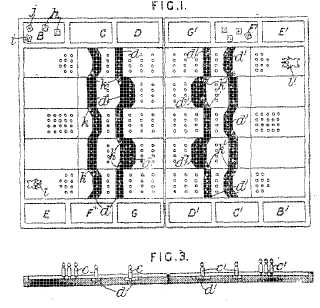 By this time, with war weariness, few military games were being patented.

British company Qinetiq has devised an unmanned solar-powered surveillance aircraft, the Zephyr. There's an article in the Daily Telegraph about it (which includes a video).

This followed its record-breaking flight: it stayed aloft for three and a half days. The energy picked up by solar panels on its wings charge batteries under the wing so that the twin propellers can continue working all night to keep it aloft.

This sort of capability is ideal, of course, for spy planes and the like.

As usual I checked for a patent for the invention. All I found was a Method and Device for Launching Aerial Vehicles . Here is the main drawing, and the following summary of how it is launched is taken from that patent specification. "UAV" means unmanned aerial vehicle. It is carried up to its operational altitude suspended on a tether from a helium balloon. The tether is attached at or towards a tip of the UAV's wing so that it is carried in effectively a 90 degree banked attitude. At the right altitude the UAV's powerplant is started and it flies on its tether in an upwardly-spiralling path relative to the balloon until a level or near level attitude is attained, when the tether is released and the UAV is permitted to assume free flight.

Every month a story by me on an invention appears on the Ideas21 website. This month's is Coffee cup holders, and comes from my recent visit to the United States. It's about one of those things that people hardly notice before it is thrown in the bin.

Deer in my garden

I like to think I live in something of a rural idyll, despite being less than forty five minutes from central London by train. And over the years I have been fortunate to see plenty of wildlife stray into my garden, including rabbits, squirrels, woodpeckers, pheasants and even a grass snake.

However, for the last two nights I have been surprised to spot a trio of deer (a mother and two youngsters) in my garden, just feet from my window. Tonight I managed to take a snapshot through the rain with my mobile camera (hence the grainy quality).

Iâ€™m just beginning to worry that if they become too settled, they may decide to start eating my vegetable patch. 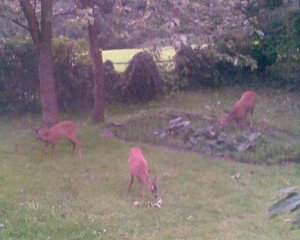 Posted by Innovation and Enterprise blog editor at 10:42 PM

In what might be considered something of a busmanâ€™s holiday, last night we hosted a visit from the City Information Group. The fifty or so information professionals who came along seemed to be suitably impressed by both our Treasures Gallery and of course the Business and IP Centre itself.

The organiser Jill Fenton has written a nice note in her blog.

Katy Crosse came with a group from TFPL (the Recruitment, Consultancy and Training company), and put a short write-up on their blog.

Apparently the list of attendees was oversubscribed so we may do it again.

Posted by Innovation and Enterprise blog editor at 2:48 PM