As many inventors are all too aware there are many sharks out there ready to rip-off those less experienced. So it comes as a pleasant surprise to find a commercial website that wants to to help bring new products to market without the sting.

As well as selling innovative products (many first seen on Dragon‚Äôs Den) MUST get1 gives useful information and advice to inventors and would be entrepreneurs. New products very often d√©but first on MG1 either as full launch products or as marketing trials. 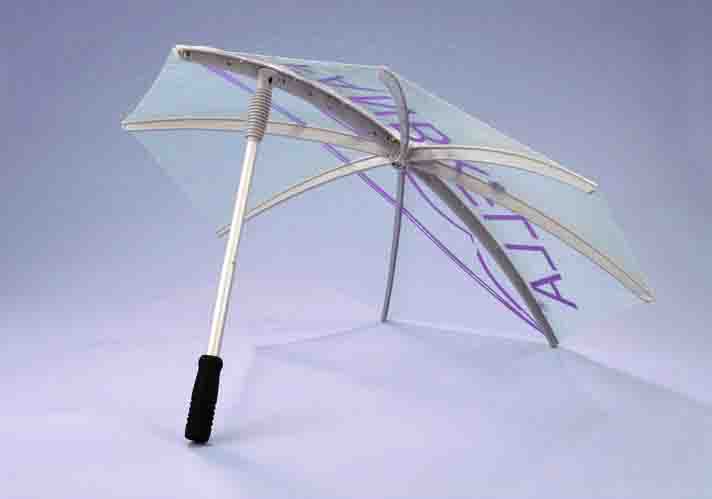 As well as my old friend the Milli-grip spanner I came across a remarkable new take on that old favourite the umbrella, which according to Wikipedia dates back to at least 2,000 years BCE. This one is called the Fanbrella and avoids all of the complicated and dangerous springs and spars of the traditional folding design.

Unfortunately the promotional website is not as professional or detailed as I would have liked, so I can‚Äôt get a clear view of how it works.

Posted by Innovation and Enterprise blog editor at 10:02 PM

Dragons' Den is an entertaining TV programme as so often those asking for cash for their ideas are naive, but sometimes the experts do get it wrong. Shaun Pulfrey's Tangle Teezer¬Æ is an example.

A year ago he asked for ¬£85,000 in return for a 15% stake in his new hairbrush. Its teeth are designed to flex just the right amount to minimise tugging while smoothing the cuticles, says a story on the invention. An experienced London hairdresser, Pulfrey had thought of the idea 15 years ago but only made a prototype in 2004. All the dragons dismissed it.

A few weeks ago, Boots agreed to stock the product at 600 stores. Turnover (largely on the Internet, at ¬£9.95) is already ¬£800,000 annually, a quarter of which is profit. It looks as if the dragons missed out on a nice profit.

I had a look at the intellectual property behind the idea. In March 2005 Pulfrey applied for a European Community trade mark for the name, probably his most powerful selling tool.

In March 2007 he applied for a British patent, which was published a week ago as a Hair care device.

Then in April 2007 he applied for a Community design, one of the drawings of which is shown here.

In October 2007 he applied for design protection in the USA with American "design patent" D576804.

Finally in January 2008 he filed for a US trade mark/ trademark for the name. There may be other applications waiting publication, such as, perhaps, an American patent application.

The difference between designs and patents is, broadly speaking, that the former protects the appearance while the latter protects how it works. He used Marks & Clerk, a firm of patent attorneys, to advise him on his strategy and to write the applications.

A problem for anyone interesting in foreign protection is that this must be sought within 12 months of filing for a patent, or within 6 months of filing for a design. "Filing out of convention" by missing those deadlines means that your own domestic filings can be used to show that the idea is not new. Many who might be interested in filing abroad do not (yet) have the finance, or are not certain of product appeal, and therefore decide not to gamble on filing. Failure to file in a country means that the idea can be used there by others.

Here is a video explaining the product in more detail.

I‚Äôm off to ebic 2008 on Wednesday for the TFPL organised conference of which I was a regular attendee a ten years or so ago. After a gap of a couple of years they have revamped it in the form of a ‚Äúnetworking event for people working in the knowledge and information arena‚Äù.

I am looking forward to meeting some old and new faces from the profession, and to seeing Berlin again after a ten year gap. At that time it was the largest building site in Europe as it adjusted to the removal of ‚Äòthe wall‚Äô.

Appropriately today‚Äôs Net@Nite with Leo and Amber included Flight Memory, a new flight tracking website which enables you to record previous trips and produce cumulative data. It also generates a map similar to the ones found in the back of the airline magazines showing where your flight routes.

They will also calculate your total time in the air, distance flown and even keep track of aircraft types and airlines. All they need to add is the amount you have added to global warming to complete the picture.

Posted by Innovation and Enterprise blog editor at 1:39 AM

I‚Äôm not sure if the current trend for politically inspired products indicates a growing disenchantment with politicians (of all flavours). Or is just another unexplored niche in the crowded household products market.

One of our success stories Bill Anderson has developed a range of salt and pepper grinders under the brand Dead Wringers. He hopes to expand the range beyond the existing set of politicians and royals to include celebrities. You get the chance to vote for who‚Äôs neck should be next on the line.

Bill hopes Dead Wringers will put some much needed colour and fun back into politics. ‚ÄúFor seven years I lived directly underneath Screaming Lord Sutch of the Monster Raving Loony Party. Some of his spirit of mischievous wit must have trickled down through the ceiling.‚Äù

A more recent, and even less respectful, product is the Thatcher Nut Cracker

‚ÄúThe Iron Lady is back one last time to serve her country, crushing nuts between her steely thighs. Walnut, Macadamia, you name it - there‚Äôs no nut that‚Äôs a match for Maggie‚Äôs mighty pins!‚Äù

Posted by Innovation and Enterprise blog editor at 3:56 PM

You can‚Äôt afford not to be green

Well, according to the YUDU Green book anyway. This carbon free publication contains ‚Äú51ways that your business can save money and the planet‚Äù.

The ‚Äòbook‚Äô is a great way for YUDU to promote themselves and their carbon neutral approach to publishing.

YUDU believes in lessening the environmental impact of printing. While there will always be a desire for printed publications, we want to cut out the unnecessary use of trees and energy to help reduce carbon footprints.

But it‚Äôs not just the act of felling trees; the whole process of printing and distribution is harmful:

So it‚Äôs not difficult to appreciate the environmental benefits when you publish with YUDU.

But hard as we try, we cannot be completely energy free. The computer servers that process, host and serve YUDU publications all consume energy.

So to make sure all YUDU digital publications are as carbon neutral as possible, we completely offset all our CO2 emissions by donating money to Carbon Clear, a leading carbon management company. They invest in projects that improve living standards in developing countries and which provide global climate benefits with clean energy projects and reforestation initiatives.

Posted by Innovation and Enterprise blog editor at 3:00 PM

As I write, it is just a few hours until Yves Rossy attempts to cross the English Channel using a jet-propelled wing. Success would mean the first such flight.

I can only find one published patent application for him, the Pneumatic Gliding Wing for a Freefall Jumper. Here is the main drawing. Although it certainly looks like the concept, the model he intends to use may be a little different in how power is generated. This patent application talks of using pressurised gas, while the Daily Telegraph's story talks of kerosene (paraffin) powered gas turbines. In both versions (if they are different) a parachute is used to end the flight.

Today I visited Manchester‚Äôs Commercial Library and Ask About Business service with my colleague Nigel Spencer. The weather was spectacular all day which made for wonderful views from the train over Cheshire and the Peak District. But also put a lie to Manchester‚Äôs reputation as grey and wet city. Walking along the canal past Victorian industrial palaces and modern glass and steel offices to the impressive circular building (apparently based on the Pantheon in Rome) was a delight.

The meeting was to compare dev elopments in our respective services and to explore how we can support each other in future. They demonstrated their recently launched Ask About Business service, which is particularly impressive.

What is particularly inspiring was the decision to use their numerous local libraries as the front line for this new service. Customers are then referred to business information specialists on a case by case basis.

It was flattering to hear that some of their initiatives (such as workshops and use of success stories) were inspired by our activities in the Business & IP Centre. Considering the limited budget they have been working to, their achievements are even more extraordinary.

Providing remote free access to the Cobra (Complete Business Reference Adviser) database (one of our most useful sources for business startups) is inspired.

Posted by Innovation and Enterprise blog editor at 9:51 PM

Predicting the electronic future in 1968

It is either courageous or foolhardy to predict changes in technology.

I came across an example of this the other day in the August 1968 issue of the National Geographic, in an article about crystals (electronics) by Kenneth Weaver and James Blair, on page 294. Based on discussions with "industry leaders", they suggested four advances in electronics.

At department stores, clerks will take your personal identification card, put it in a slot connected by computer to local banks, and transfer money from your account to theirs. A phone line, actually, but very accurate.

In homes, terminals linked to a master computer will run your household, controlling your appliances. You will be able to phone in to start the oven. No suggestion of Bluetooth technology meaning that the appliances can talk to each other. Intelligent or smart homes is the usual term for what is still an infant technology.

Books from the local library will be reproduced on a screen in the home, having been recorded on magnetic tape, and newspapers will be printed out from a machine in the home. The power of digital media had not been foreseen with Google Books and the like, and most people in the UK at least get updated news from the Web, or read free daily papers piled up at stations.

Lastly, cars will have a computer "no bigger than a teacup" to control the ignition and the dashboard instruments, and radar will monitor the distance to the next car, sounding a warning if they are too close. I scoffed at the idea that radar would be used, but apparently this concept is already available in some cars, and is called adaptive cruise control.

An example is the illustrated Adaptive cruise control system by Hitachi. 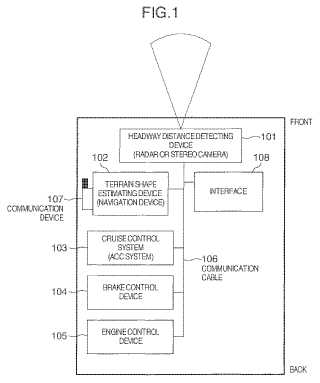 And when did they think these ideas would become reality ? Writing 40 years ago, these industry leaders, talking up the ideas, thought once large-scale chips appeared "some years hence".